Member
I’ve never owned rainbow fish until I bought a group of 8 threadfin rainbows off ebay. Unfortunately all were male so I did some digging around and inquiring online before I eventually ended up finding 3 females at my local petstore. Snapped them right up for nearly the same price as my 8 males (yikes). After adding them in with the males it took ~2 weeks before they got busy and surprised me with little ones 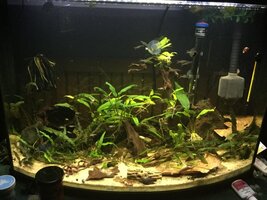 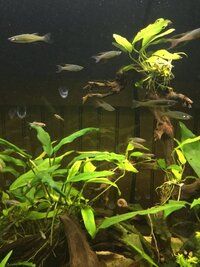 I’ve raised bettas so they can’t be as hard as that right?

Side note: special thanks to Fishstery for a bit of experienced advice!

So far there looks to be about two dozen inside a breeder basket in the main tank. The spawn mop has more eggs on it so I’d expect more in the coming days. I’ve seen the fry pecking at HikarI first bites and micro worms so they’re probably eating enough. 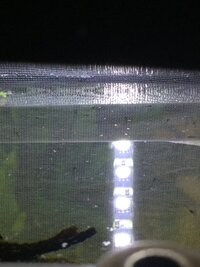 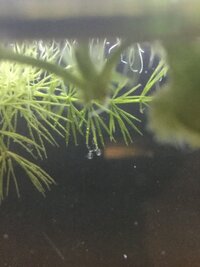 Geek note:
1. Eggs are very sticky, trying to remove them from the mop with a pipette is near impossible as they stick to the end of the pipette via tiny adherent threads
2. Eggs are laid over the course of a few days so fry hatch out in batches
3. Males are quite gentle with the females so having more males than females doesn't seem to cause issues for this species.
4. I've been feeding grindal worms and BBS every couple days so perhaps this helped induce spawning.

Member
1 You can just use your fingers. The eggs are fairly robust.
2 They generally spawn in the morning. Best time to check the mop is early afternoon, especially if there is anything in the tank that might eat them.

HikarI first bites may be a little large for newly hatched werneri. They usually need food in the 50-100 micron range. There is usually some infusoria floating around in a planted tank that will get them through to the bbs stage.

Great job! These are not the easiest of rainbows to raise in the early stage. Once they get to bbs you are usually in the clear.

Member
I don't know but I would of guessed rainbows needed infusoria, there's a few people breeding local variants in ponds in Australia.

Member
Well, I've abandoned the first attempt at raising rainbows. I just wasn't prepared for fry and the little buggers ended up dying on me. Since then I've had a lot of time to reassess the situation and I'm trying again. I've added 2 new species of dwarf rainbows, forktails (2M4F) and a trio blue eyed gertrudes. They are absolutely lovely and I don't know why I didn't get into rainbows sooner.

The newest additions were the forktails, they were quarantined for about 3 weeks and I was pleasantly surprised to find 2 little fry in the quarantine tank after moving the adults to the display. They are very cute and eating BBS like champs. The 2 mops I had in the tank were also moved into the quarantine after I noticed the fry, hopefully there are some eggs on them but time will tell.

I started a new feeding schedule with decapsulated brine shrimp eggs and fresh BBS. I've seen the males showing off, especially the blue eyes. Hopefully they find their way to the spawn mops rather than the tangled roots of the anubias. I currently have a group of fireline danios in a 29gal in hopes of them spawning but so far no luck as far as I can tell. I'm debating on moving the rainbows in there for a couple weeks and then moving them back, hopefully eggs are laid and I can rear them in that tank.

Member
I’ve picked eggs twice and there should be ~20 good eggs. They are all at different developmental stages, which is cool to see. There are different sizes so it looks like at least 2 species are spawning. 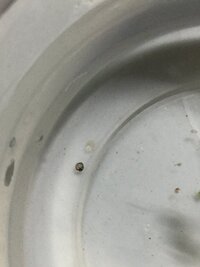 3-4 new tiny fry hatched, I’m not entirely sure they are eating but I’m feeding micro worms and BBS with occasional First Bites. The 2 forktails are very active and almost 3 times the size as the other fry.

Member
Picked another dozen or so eggs today and did a small water change in the fry tank, counted about 2 dozen fry of varying sizes. I’ll have to try getting pictures of the bigger ones.

Finally got some still photos of the adult rainbows. I’ve noticed the threadfins really like to hang closest to the top level and away from all the other fish. They are very dark colored compared to the others. 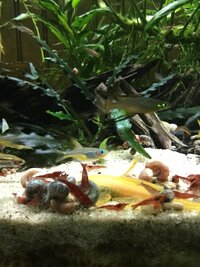 The Gertrudes are very chill too, the only time I see a bit of aggression is when the forktails get too close to the male or his ladies. 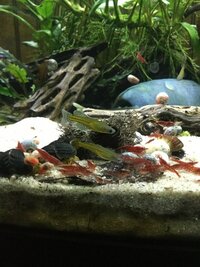 The forktails are crazy, they love to be right in the filter output current, they eat stuff off the substrate and the males are pretty territorial to each other and even the females. Glad there are only 2 males. 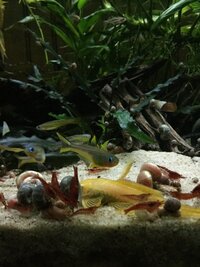 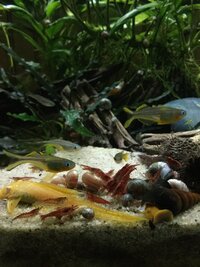 Member
Soooo many babies, right now I have ~16 fry in the 7.5gal cube with black shrimp. All seem to be gertrudes and forktails, no threadfins. The threadfins are so tiny I feel they can’t eat micro worms as first foods so they starve to death. I decided to buy a variety of fry food cultures and micro pellets off aquabid. Hopefully I get a better survival rate out of them.

Side note I think I have choprae danios and maybe least rasboras breeding, might have some fry from them on the way.

Not many pictures of the fry, they move way too fast. Here’s the tank instead. So far the largest ones are about half and inch, others in this tank are about new born guppy size and growing fast. 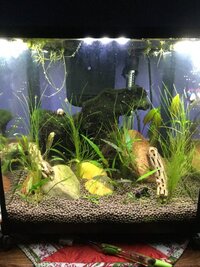 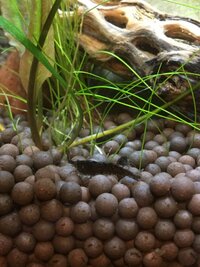 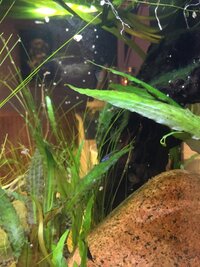 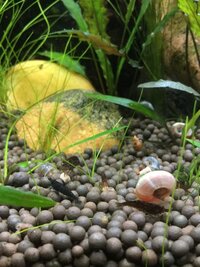 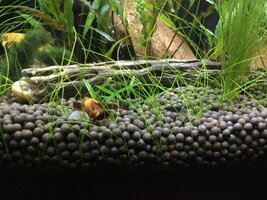 Member
Hi all, Demeter I don’t claim to have all the answers but can share my story. I have had some success raising a couple of batches of rainbow fry ( praecox) and other tiny mouthed fish ( pencil) . I have dropped them straight into a green water tank that had an air stone using a turkey baster . After a week or so I changed out some green water for more green water from outside fire buckets. I did not add much additional food on the later batches of fry for 3 weeks. I started adding dry foods and micro worms. brine shrimp etc at around 3 weeks so the fry learnt about other foods.

To make green water just leave dirty old aquarium water out in the sun without any floating plants. 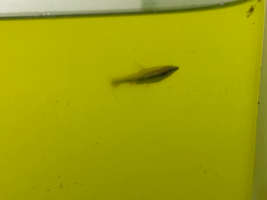 Second photo is what passes as a fire bucket down under. 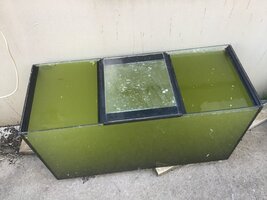 Flyfisha said:
Hi all, Demeter I don’t claim to have all the answers but can share my story. I have had some success raising a couple of batches of rainbow fry ( praecox) and other tiny mouthed fish ( pencil) . I have dropped them straight into a green water tank that had an air stone using a turkey baster . After a week or so I changed out some green water for more green water from outside fire buckets. I did not add much additional food on the later batches of fry for 3 weeks. I started adding dry foods and micro worms. brine shrimp etc at around 3 weeks so the fry learnt about other foods.

To make green water just leave dirty old aquarium water out in the sun without any floating plants.

Second photo is what passes as a fire bucket down under.

That's certainly one way to do it! I figured I'd be alright with just micro worms and BBS as that is what I used for several betta spawns, I'm guessing the micro worms sink too fast and are on the large side for the tiny rainbows. I'll be getting a starter culture of paramecium (basically green water if I remember correctly) along with walter worms, banana worms and vinegar eels. Also wanted to try the same sellers "fry crack" so I have 3 different sizes of that on the way too.

Member
Sounds good. Yes I agree the micro worms probably sink to fast.?
Vinegar eel certainly swim at the surface/ the right place. I have only one culture of vinegar eels but have never feed them to fry. I should start more cultures of them and start going through the siphoning off routine to be ready for the possibility of more fry.

I have tried to make an Infusorea/ paramecium culture but believe I just didn’t see it if I had anything. Or I had way to much plant and vegetable material and poised anything . Sure did stink.

I like the laziness of green water but what I did not say is mine has hydra in it. No big deal but it was the first time I had seen Hydra.

Member
I’ve started feeding paramecium to the young fry, hopefully I will start seeing threadfin mixed in with the other species. I also have a handful of glow light danio fry so we’ll see how they do. I’m also trying “super fry” which is basically powdered green water, looks like they are eating. It also works great to feed brine shrimp.

I moved 6 of the largest fry into the adult tank. 4 gertrudes and the first 2 forktails that started it all. They’ve been in there for a few days with no issues, I plan to up the school or Gertrudes to at least 6 so we have a good start. 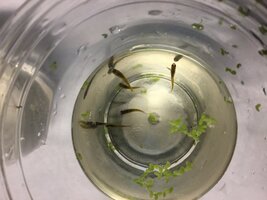 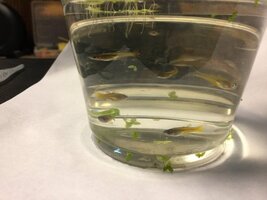 A batch of smaller fry were moved to the 7.5gal cube and are doing well. I hope to start selling some in a couple more months. 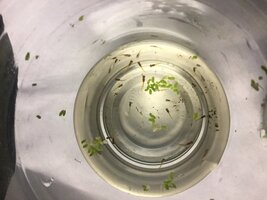 Member
Isolate the threadfin eggs and fry, or you will never get any. The other two species' fry will eat them. I managed to raise a couple on vinegar worms/eels. I almost always had green water in the fishroom somewhere, except when I needed it for these fish! I have fed green water to other species of fish by just putting a few drops in the fry container. Two advantages, you can still see the fry, and as algae, it helps keep ammonia down.
You must log in or register to reply here.
Share:
Facebook Twitter Reddit Pinterest WhatsApp Email Link
Top Bottom