The freshwater Angelfish is a very popular tropical fish because of its unique shape and because of their interesting personalities. They are aggressive eaters and will go to the top of the tank when they see you approach. Because of their aggressive feeding habits, make sure that your less aggressive fish are getting their share around feeding time. 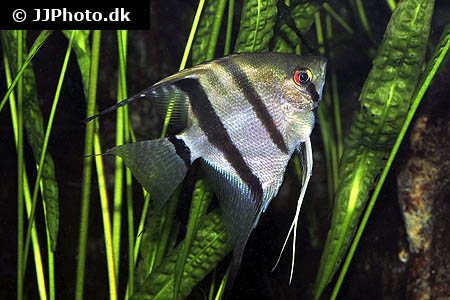 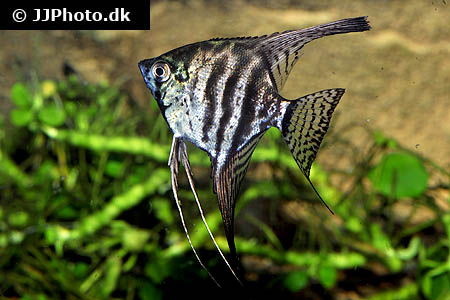 Angelfish are curious about their environment and can become very territorial, especially around breeding time. They will pair off and if any other fish tries to enter their territory they will go after them. So use caution when stocking. Read the article on breeding Angelfish for more information on breeding them.

As mentioned earlier, they are not picky eaters. They will go after many types of fish food, including vitamin enriched flakes, frozen, freeze dried and live foods. As they grow in size they may even go after smaller fish like neon tetras, so keep that in mind when stocking your aquarium.

They prefer tall tanks over short tanks because of their tall body shape. 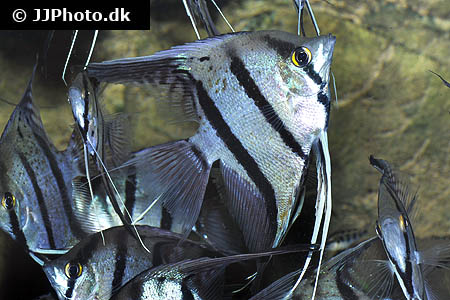 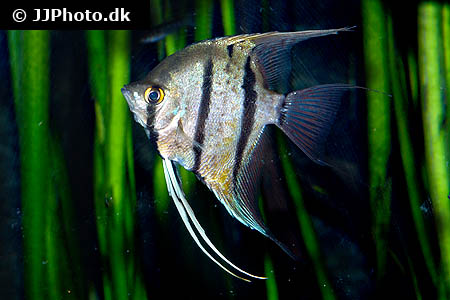 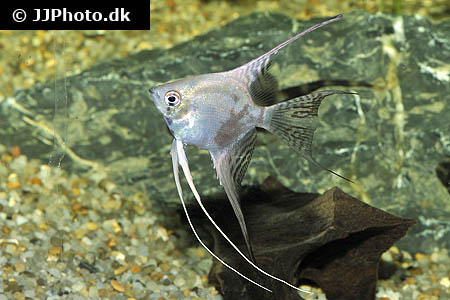 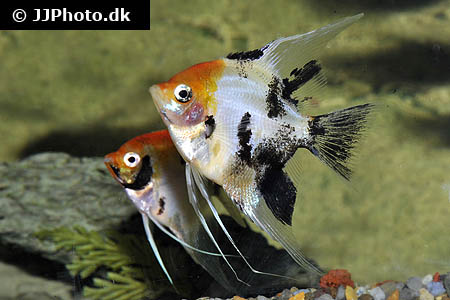 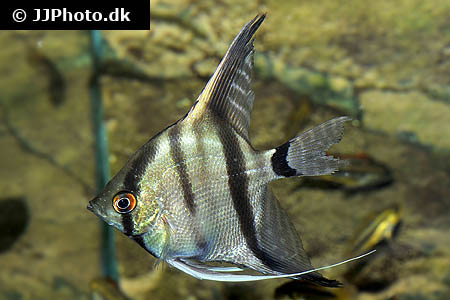 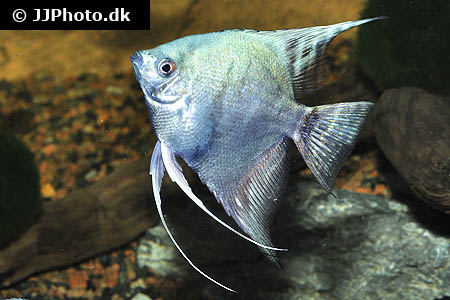 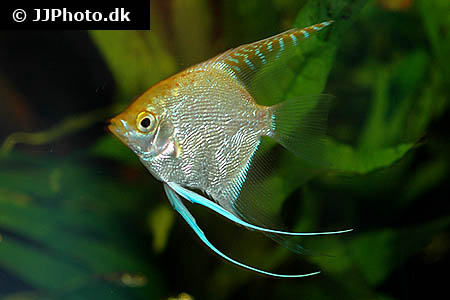 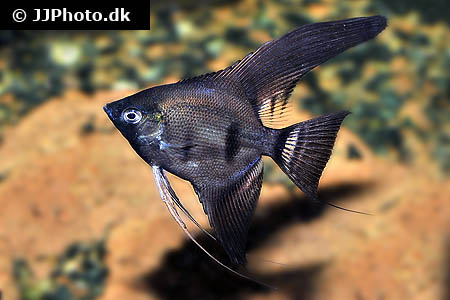 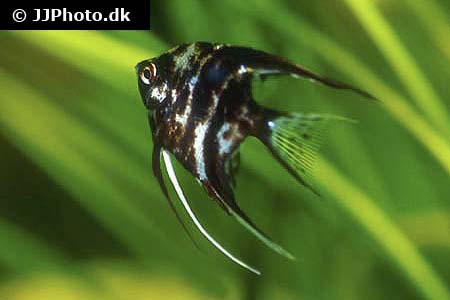 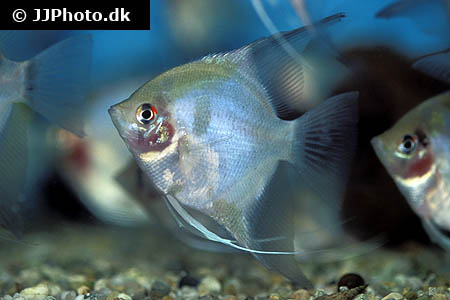 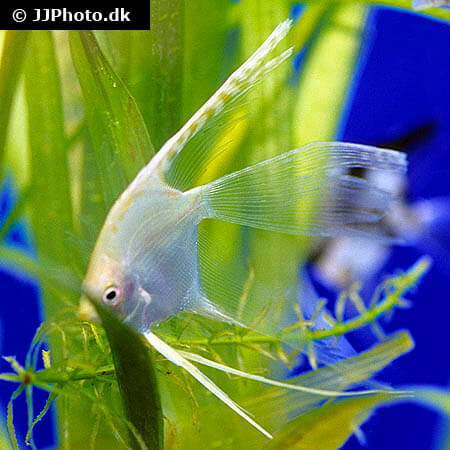 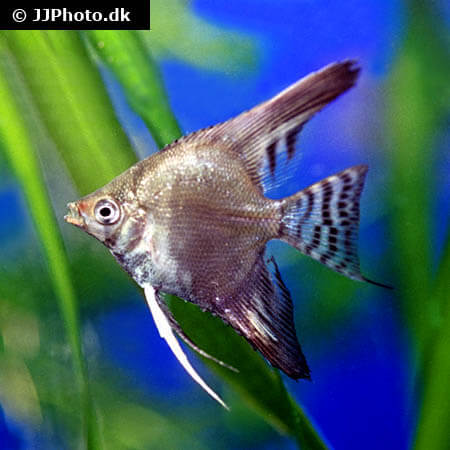 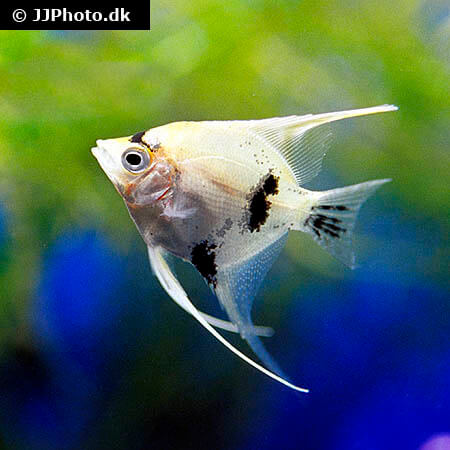 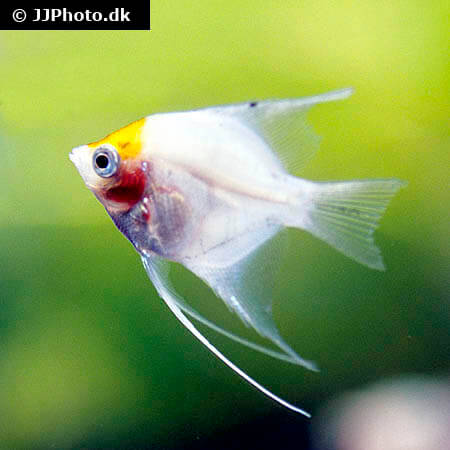 Common Names : There are many types with many different color varieties including: Albino, Black, Gold, Silver, Marbled, Koi, etc - seems there is a common name for each color variety.

Temperament / Behavior : A lot of people wonder if these cichlids are aggressive? They are generally peaceful, but can be aggressive eaters and may become territorial while breeding.

Breeding / Mating / Reproduction :This fish can breed in 7.5 or lower pH. They can breed in 78-80F water, but cooler water works as well, the fry just develop slower. They are substrate spawners and will lay the eggs on a vertical or diagonal surface. Assuming you have a pair, they are not difficult to breed. Assuming you have a male/female pair... an aquarium with live plants, smooth rock or flat slate will be good options for them to place the eggs on. Once the eggs are placed by the parents it is usually a good idea to remove the parents to prevent them from eating the eggs. Especially during the first few breeding attempts. An air stone placed under the eggs with very gentle flow over the eggs will help produce a good hatch rate. Pre-conditioning the parent angelfish with high quality live foods will also increase the chances of a successful hatch.

Tank Region : All levels of the aquarium.

From: Mark
I bought a small freshwater angel fish (2") at the pet store and I didn't notice until I got home that the fin had been nipped or eaten. Will it grow back?
FishLore:
Since you did not notice it at first, we are assuming that a very small piece of the fin is missing. Small nips in a fin should grow back provided that you give your Angel fish a good quality diet, provide them with good, frequently changed water in a cycled tank and make sure they are kept with peaceful fish that will not continue the bother (nip at) their fins.
From: Jimmy D via email
Great fish to have. I have about 22 of them and they are big.
From: Mike
I have 7 different angel fish in one tank. Are they able breed if they are mixed?
FishLore:
Sure, provided that you have males and females. Wait and watch your fish as they form pairs when they are ready to breed. Check out the article on breeding them (links above). Be prepared to remove some of them as aggression could become a problem with all of them in one tank.
From: Sean
What are some sutible tank mates if I wanted to include Angel fish in a community tank?
FishLore:
Because they are usually very peaceful, there are quite a few freshwater tropical fish you could keep with them. However, they will become territorial if they have formed pairs and are ready to spawn.

It's always a good idea to ask the fish store to test their store tank water and let you know the readings (at minimum ph, ammonia, nitrite and nitrates). When you get home with your new fish, test your tank water and compare the store's tank readings with your own to determine if you need to have a longer acclimation period. Use a fish quarantine tank before introducing any new fish into your display tank to avoid the spread of disease.

From: Sabrina Watson
Hi, I have recently recovered some angel fish that have been in a tank with tiger barbs where the angels fins have been badly bitten and large parts are missing, will the fins grow back?
FishLore:
If you separate them from the fin nippers, give them good water conditions and a good diet the fins should grow back. Watch for any signs of bacterial infections and keep the water clean by frequently doing partial water changes.
From: Discus with Angelfish
I kept a pair of angelfish with my 4" Blue Diamond Discus, they got along together ok until the Angelfish matured and ended up as a mated pair. It was at that time that I had to remove the Angelfish because my discus could not fight them both at the same time. It basically became an issue of territory.
From: Tay
Hey just a quick question. Do angels like to be kept in schools? Or could I keep only one in my tank and have him be okay? Thanks!
FishLore:
Once they forms pairs they can get aggressive with other angelfish, especially if they are protecting eggs. Keeping only one should be fine.
From: Denis
I have 2 paired Angelfish. They laid thier eggs on the corner of the tank. I then transfered to a fish net breeder to protect it from other fish and their parents that are trying to eat them. After a while it seems like it has some fuzz covering some of the eggs. What is it? And should I worry about it? If I should is there something I can do?
FishLore:
The fuzz sounds like fungus is growing on the unfertilized or dead eggs. You need to keep them aerated. An air stone that bubbles placed close to the eggs should keep the eggs well aerated. It's similar to what the Angelfish parents do when they are fanning the eggs. Methylene Blue is also supposed to help prevent the fungus. You'll need to put the babies into a separate tank if you're going to use this medicine. You don't want to put it into the main tank. Try the air stone first though.
From: Maria
I just added an Angelfish to my approx 70 gallon tank. I already had 3 bala sharks, 2 dwarf gourami and 4 very small tiger barbs. I had been told the tiger barbs wouldn't be a problem with the Angelfish, but now reading some of your posts about it, I'm concerned. What do you think?
FishLore:
The tiger barbs are notorious for the fin nipping, especially when kept in smaller groups or individually. I'd return them to the store, but you can always see how it goes first. 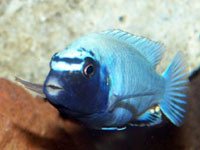 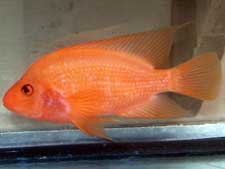