The Guppy is perhaps the most popular freshwater tropical fish species and a great fish for freshwater beginners. Although this is a very hardy fish, be warned that it is also a very prolific breeder!

The male is easy to distinguish from the female because the male is usually more colorful with extremely colorful and large caudal fins (tails). The female is usually larger, thicker bodied, with less color and a smaller cuadal fin (tail). 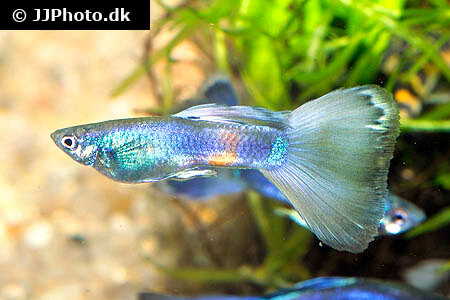 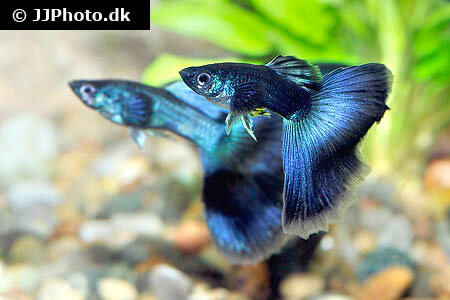 They are livebearers which means that the babies are free swimming at birth. At each birth, the female can have anywhere between 4 and 60 or more babies. If left in a community tank, the fry will be quickly eaten if not secured in a breeding net or breeder's box. Sadly, even the parents will partake in the baby fish feast.

Please be responsible and have a plan for what to do with the fry. If you're not interested in breeding them they should do just fine when kept as all males or all females. Or if you've come to this page because you have a tank full of unexpected babies, read the breeding guppies article for more information on what to do. If knowing that the larger fish in the tank are having a feast (as they would in the wild) on the baby guppies bothers you then only keep all males or all females. You may sometimes see some aggression amongst the males but nothing too out of hand.

They will accept most fish food including vitamin enriched flakes, frozen, freeze dried and live foods. Try to give them a variety of foods for optimum health and coloration. Feeding them live or frozen foods every once in a while should do wonders for their activity levels and general well being.

If you are looking for guppies for sale you can usually find them locally for a few dollars with show quality guppies going for much more. Also check out the buy and sell forum here on FishLore. Several members sell them.

See the Care Sheet on the forum for even more details on keeping guppies. 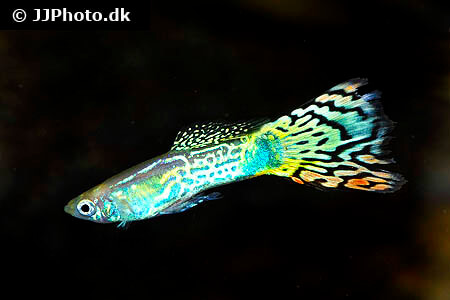 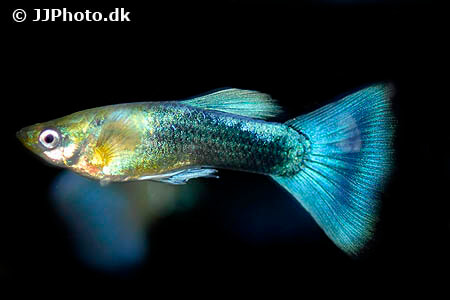 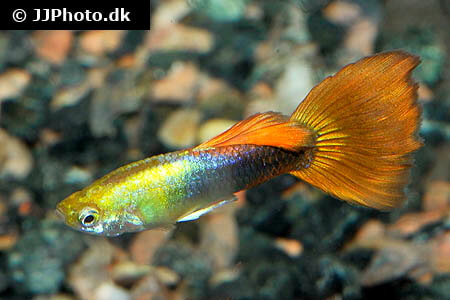 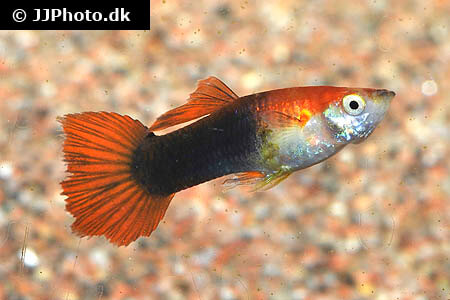 Origin : Originally from an island northeast of South America. They are produced largely on asiatic farms these days.

Care Level : Easy, good for freshwater beginners when you have only one sex. This fish will breed easily in your tank if you plan on keeping males and females in the same tank.

Size : 2 inches (5 cm) - The majority of males reach 2 inches in length. They are much more colorful than the females, generally with larger dorsal fins and caudal fins. Female fancy guppies tend to be 2.5 inches in length.

pH : 7 - 8, harder water rather than softer, and slightly to moderately alkaline

Temperament / Behavior : This is a mostly peaceful and hardy fish that is good for beginners. Male guppies can get aggressive with other male guppies.

Keeping them in an aquarium with a hood might be necessary since keepers have reported that their guppies have jumped out of the tank! I had to do some research on this because I had never heard nor seen them jumping. Sure enough, they do with the hypothesis being that they do it to reach all available habitat in Trinidad's mountain streams, which is where they originate. Evolution is amazing.

Breeding : Guppies are livebearers and are not very hard to breed. If you have males and females, chances are you will eventually have babies. Parents will eat their young if not separated. When presented with multiple females to breed with, males seem to prefer the larger females. Read the breeding guppies article for more information if you have a pregnant livebearer or fry.
If you want to try and raise the fry look into investing in a breeding box or breeder net like these:

From the caresheet on the forum:
The females are larger around the abdominal area, with the tell-tell purple cresent moon shape in the area directly above the vent. The vent being the opening in which waste is excreted as well as fry are dropped from. Purple cresent moon, also referred to as gravid area, denotes the containment of fetii, or developing baby fish.

Gestation period for poecilia reticulata averages 28-32 days depending on several factors. Water temperature, population density, availability of hiding places, quality of food, stress level, and other species in the tank all can be contributing factors to gestation period's length.

80-82 degrees farenheit water temperature has been known to cause a shorter gestation period. Population density, lack of availability of hiding places, and differing species in the tank all contribute to stress level, which can prolong gestation period, or holding of fry.

Fry become sexable at about three weeks of age, given proper conditions. Then become sexually mature around 3 months of age. Females that begin spawning at 3 months of age will have small spawns, but get progressively larger as the fish ages, until about a year of age. At one year of age they will hold steady for a few months and then begin to decline in fry per spawn, until they stop spawning all together. Males will begin breeding as early as 45 days, and continue until death for the most part.

Line breeding, or inbreeding, is often used to set desired traits. Line breeding is defined as breeding fish and their offspring back to each other, so that specific desired (desired by the human in control of breeding) traits become the dominant traits in any offspring of the fish. Generally when line breeding, new, unrelated stock needs to be added no less frequently than every 4th generation.

We've seen some adults learn not to eat their fry, some not have the issue at all, and some that we have agreed will never learn. We theorize the eatting of fry to be strain specific. Any of our primarily black guppy strains eat their fry everytime they have the chance. We've had a cobra strain learn not to eat their fry, much the same way angelfish learn. Of the strains that do not eat their fry, the mothers seem to keep an eye on them for several months, or until they become sexually mature. Females have been seen to go as far as to defend the younger juveniles from adult males in our tanks. The defending was seen more in the platinum or pastel strains than any other.

Tank Mates : Many, given their peaceful nature.

Diseases : Freshwater Fish Disease - Diagnose, Symptoms and Treatment. Guppies can easily get finrot so keep your water parameters in check and the water very clean via lots of partial water changes.

Diet / Foods : Give them flakes, freeze dried and live foods. Vary their diet for optimum colors and health. Good quality well balanced foods would be a positive, whereas low quality foods could put them in an imbalance of certain needed ingredients. In the wild they consume small insects and bugs that have plant material in their digestive tracks as well as other things, which balance them out. If you want to improve the growth rate and reproductive capabilities of your guppies, this study study suggests supplementing vitamin E.

Gender : Easy to determine. The male will have the larger, more colorful tails. 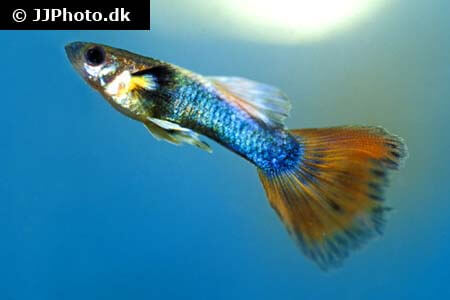 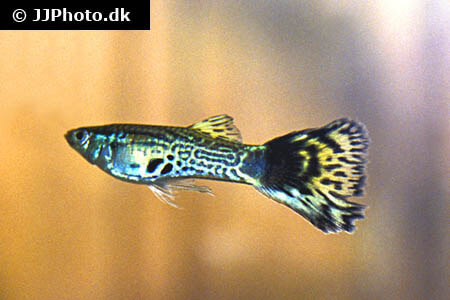 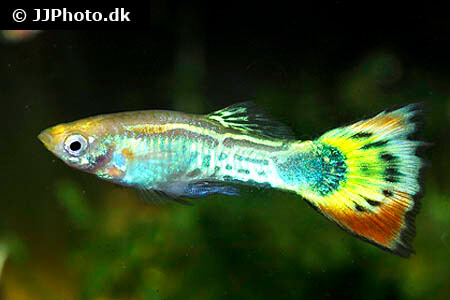 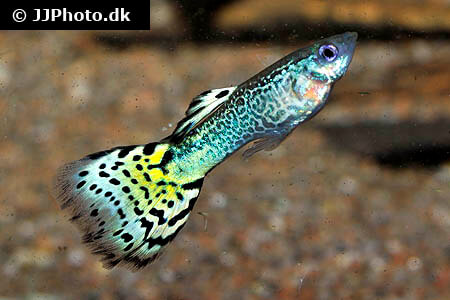