29 all in one matten style corner with diy cave

Hi all, I never finished the write up on my network tanks and rack, but I'm still not happy with my weirs on those top tanks. I'll finish it once I solve the issue.

In the mean time: Here's a quick and easy one I put together in a week so I could adopt a friend's fish as he's getting ready to move across the country. This sits in the bottom right of my 6 tank rack; the cave I detail in this, as well as the black out treatment matches the theme.

First I set up the all in one, it's powered by a 130gph pump. I used a polypropylene trash can to make the corner filter holder. The one inch thick sponge gave more resistance than expected so I ended up siliconing the thing in a second time after drilling stitching holes around the edges as silicone doesn't stick to polypropylene very well. 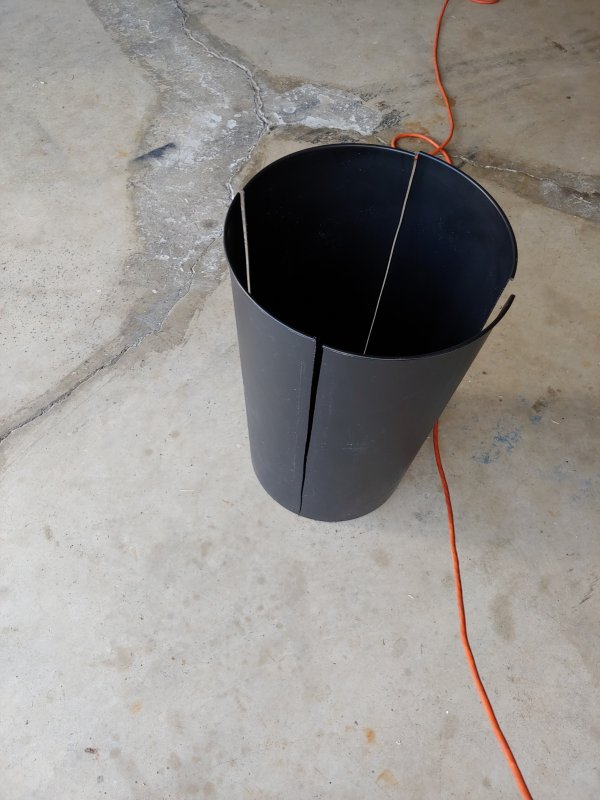 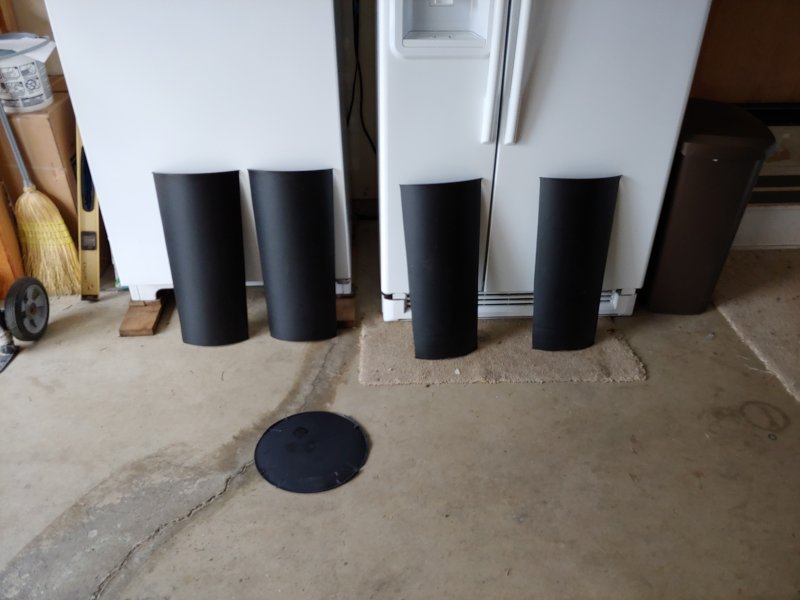 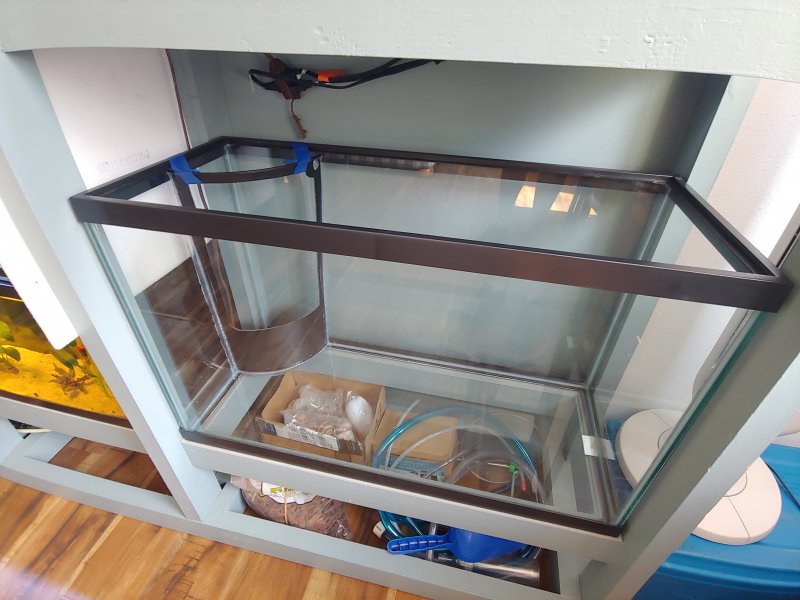 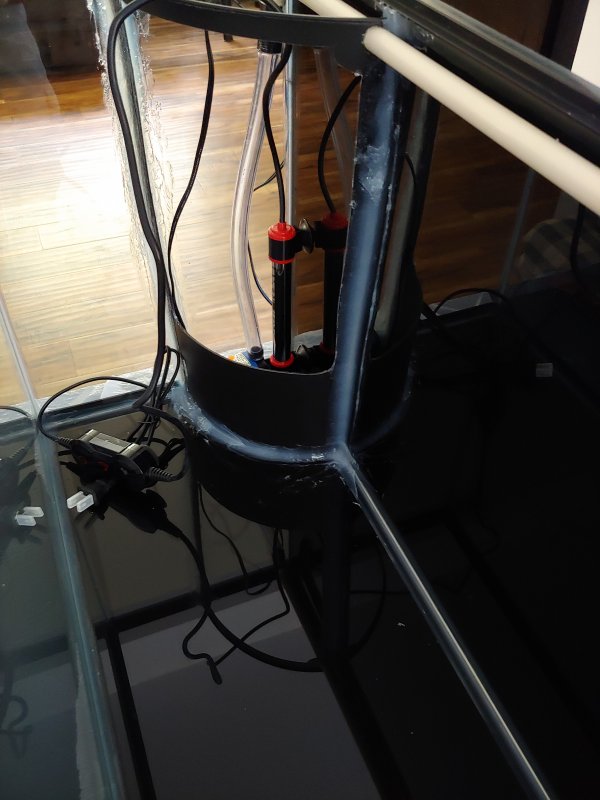 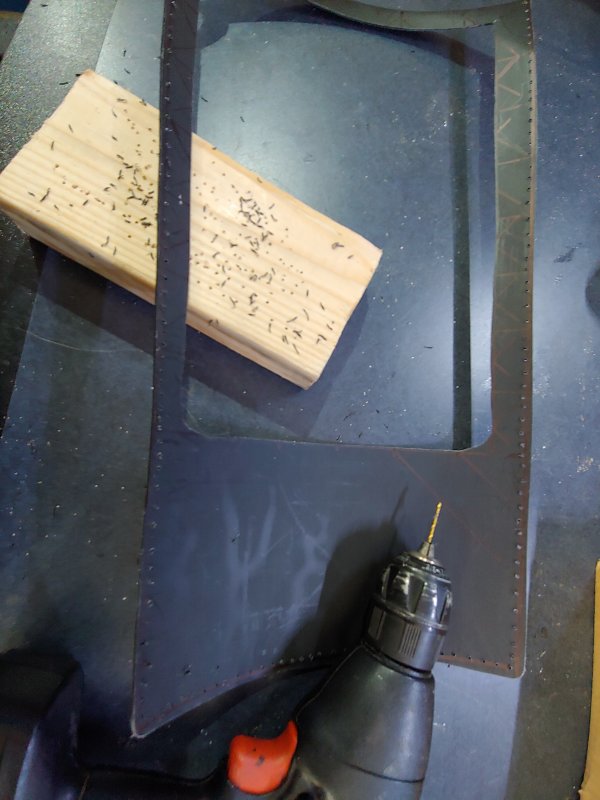 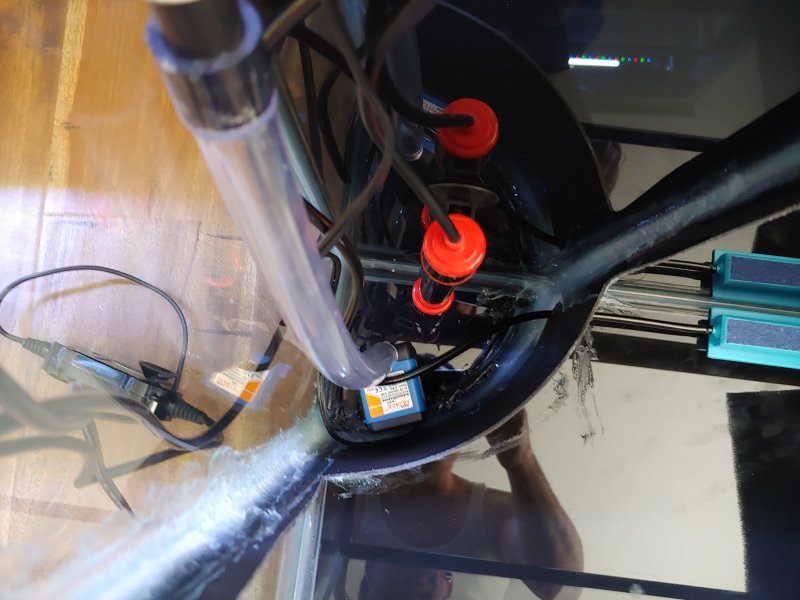 When I do my black outs, I use craft acrilic paint, thinned slightly with water. Once it dries, I cover it with packing tape to prevent scratches. 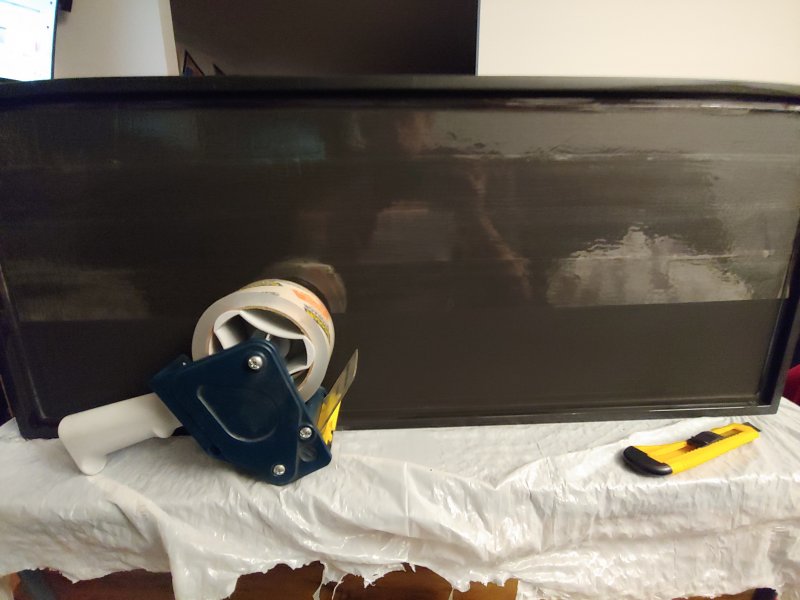 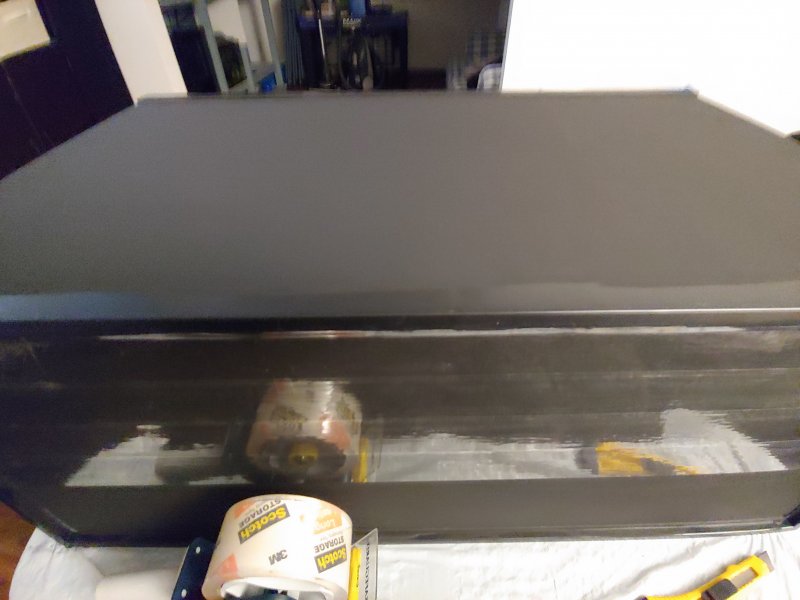 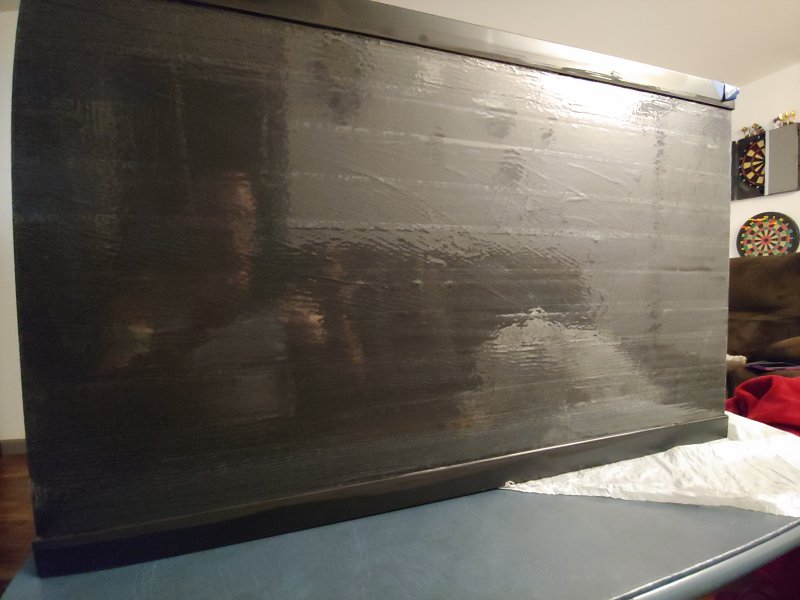 Continued in next reply:

Next, I washed some black diamond blasting sand and filled it up: 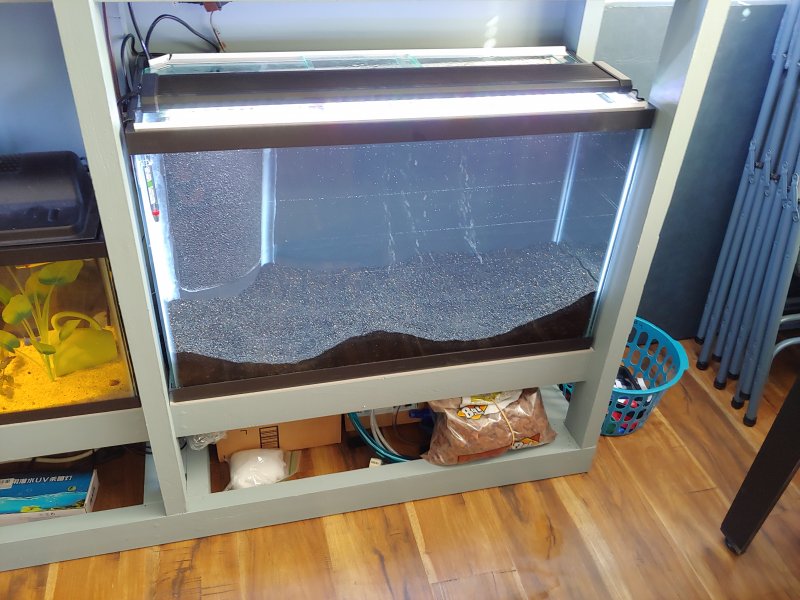 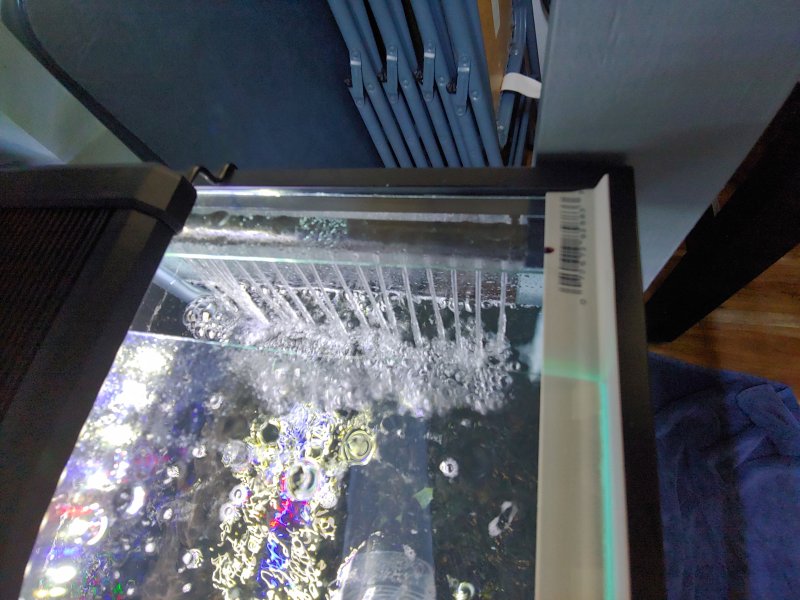 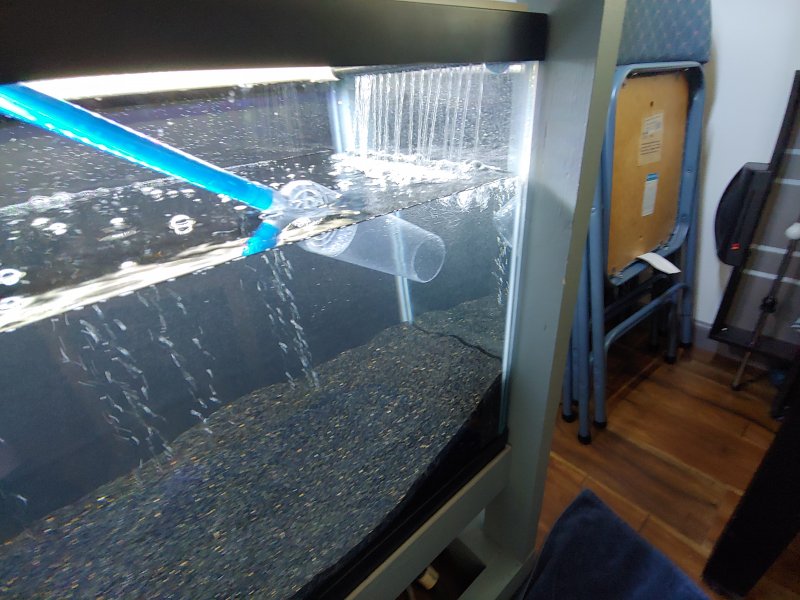 Then it was break down day at my friend's home, fish were coming whether I liked the tank or not. 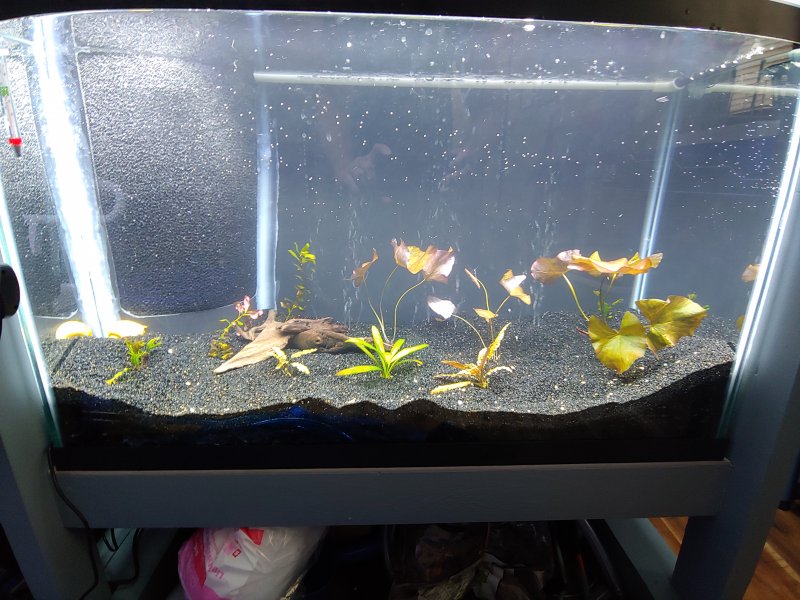 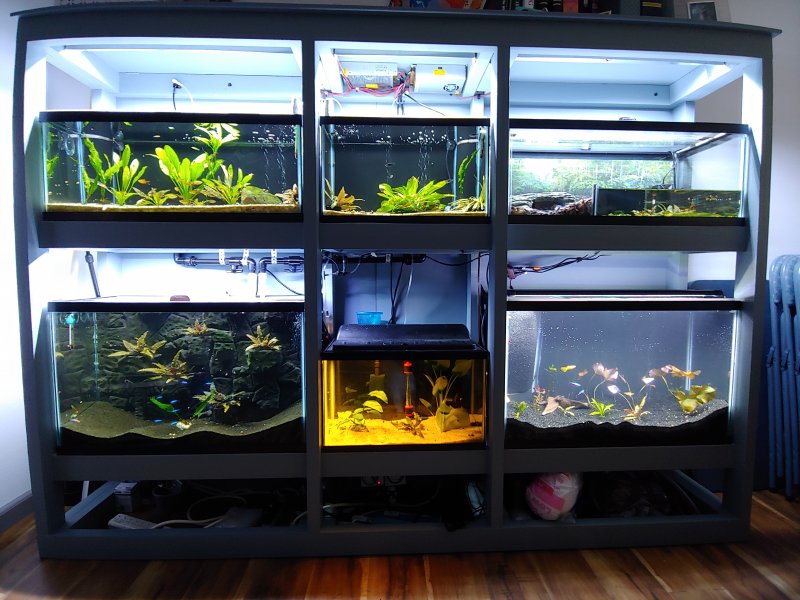 It looked kinda cool but... I tried salvaging some of his plants and just didn't have enough height. Also, his guppy was a brute and continuously nipped at the Cardinals so.... Time for more fish if I'm going to run a medicated QT anyhow (some of his fish are destined for my other tanks, but he has recently had some illnesses in his tank and a drastic reduction in stock)... and then Sorg67 gave me a unique idea so I built a cave, and added a still converting sword with a matured runner from one of my other tanks to break up the line of sight:
First made a template and gathered/cleaned some rock. I had some abs pipe laying around so I cut it to 5", and a taper on one end. 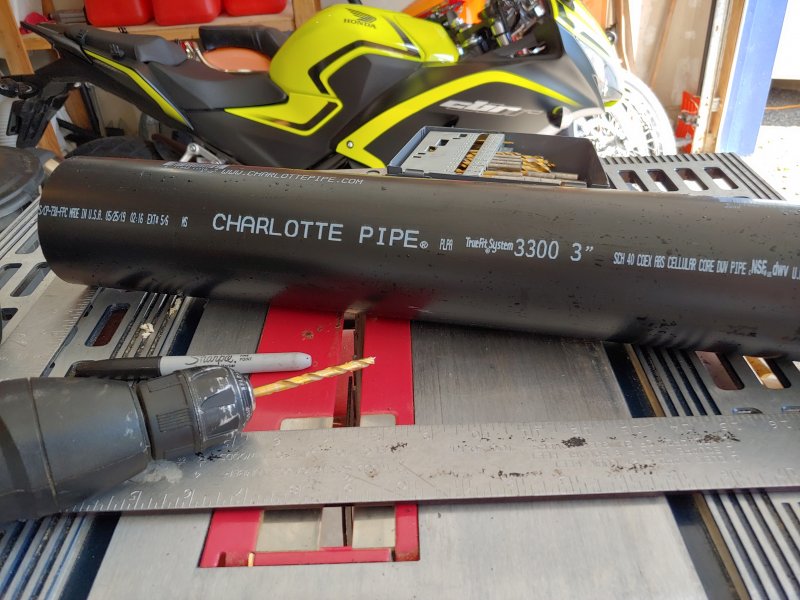 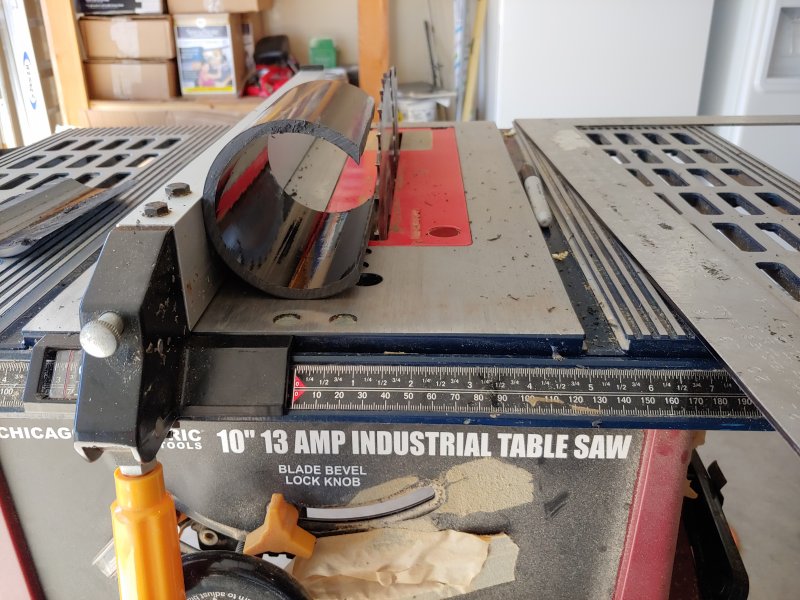 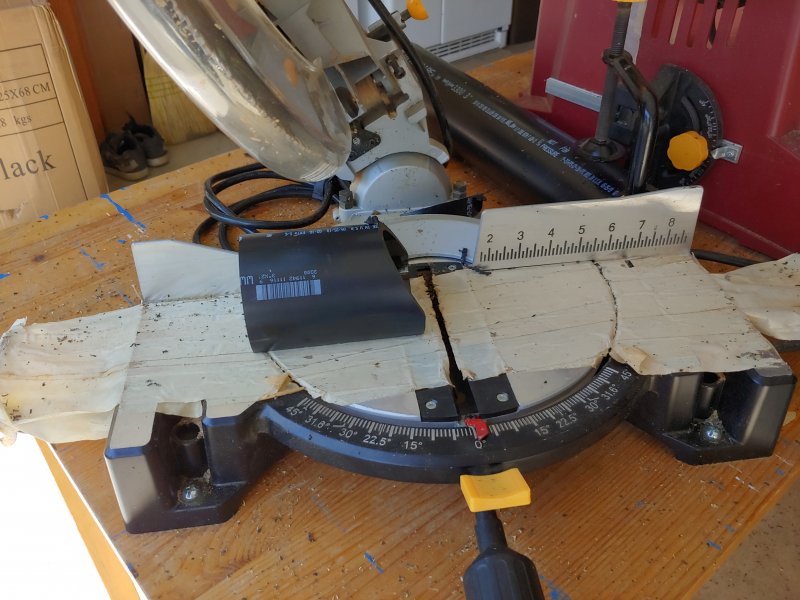 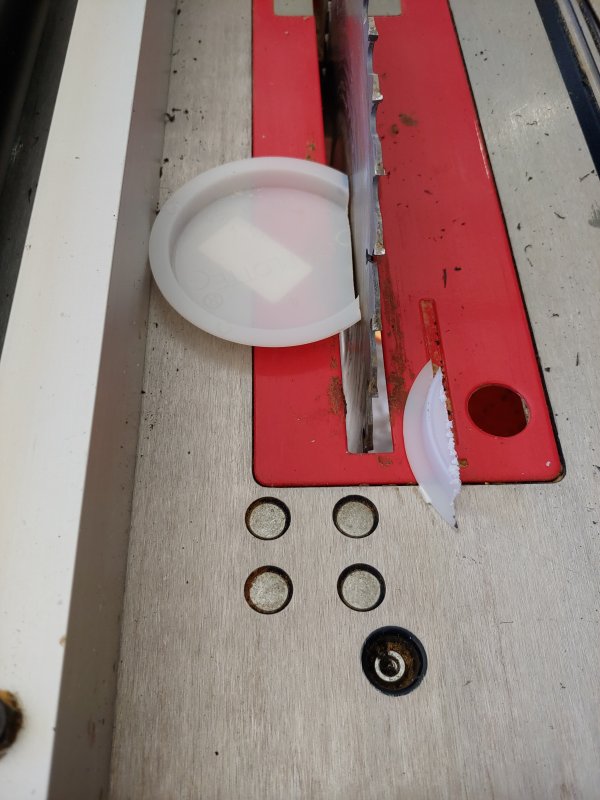 Continued in next reply:

I hot glued layer by layer staying within the template until it was 5" tall. 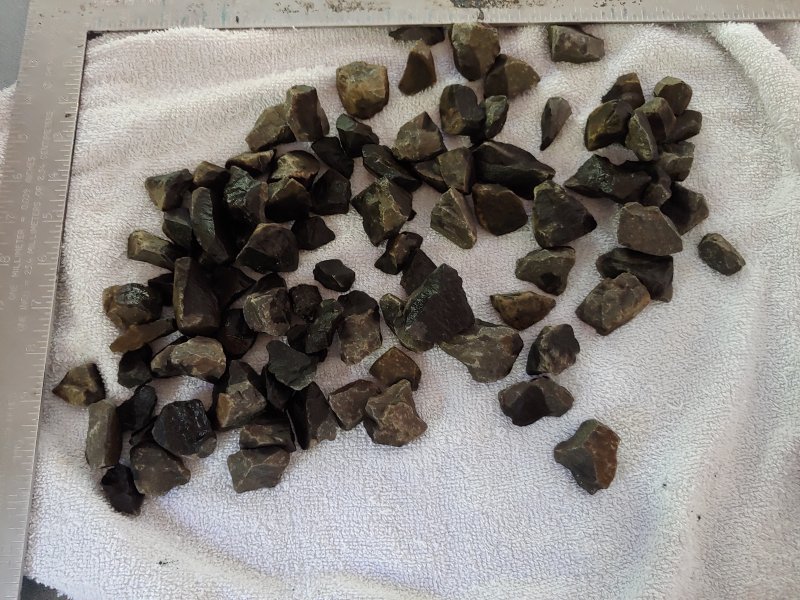 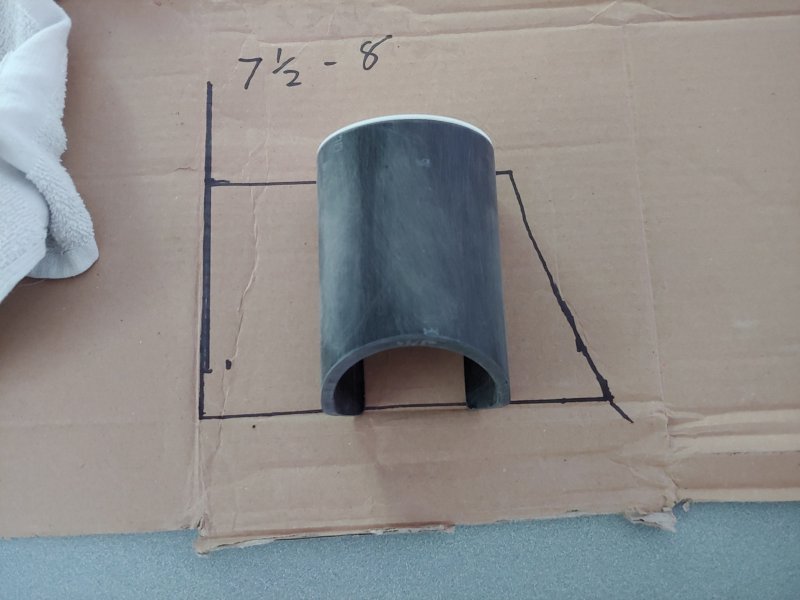 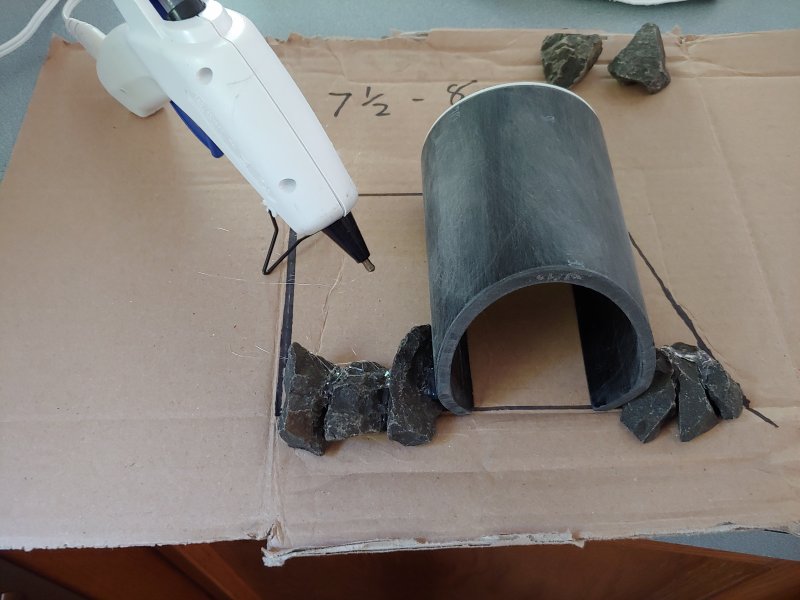 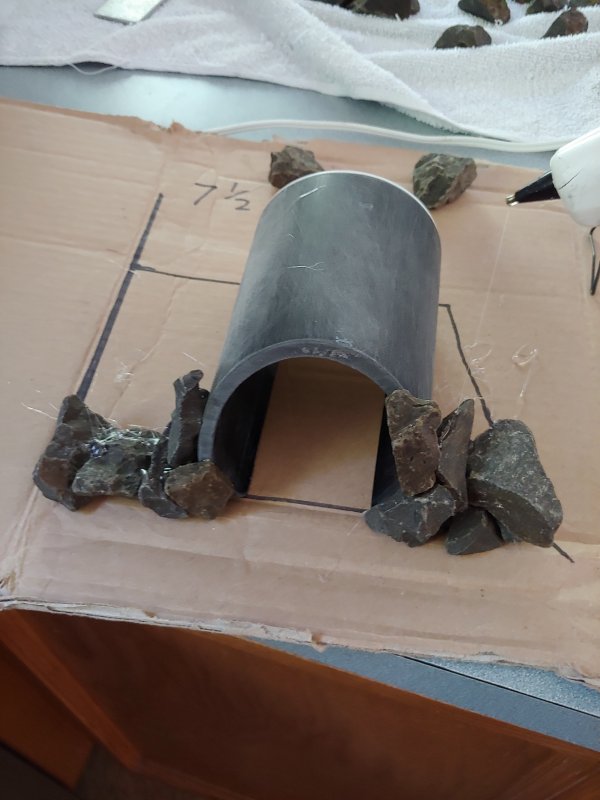 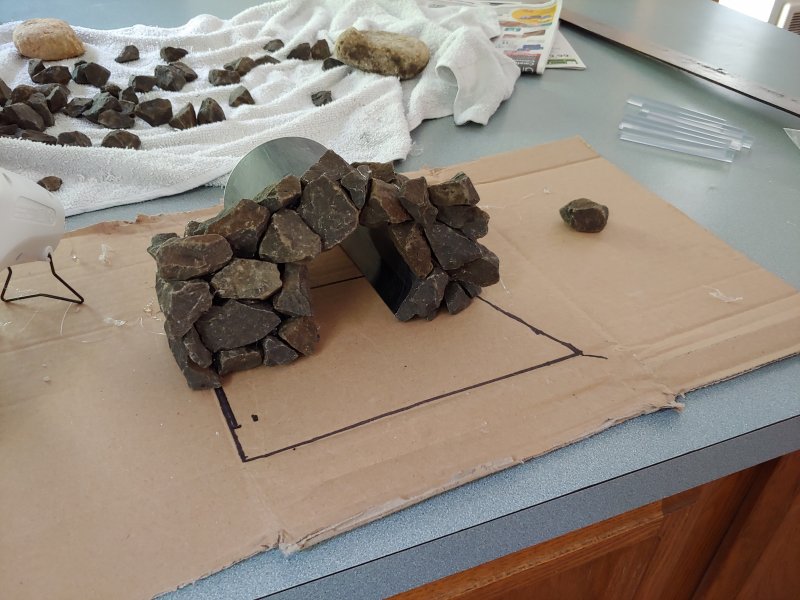 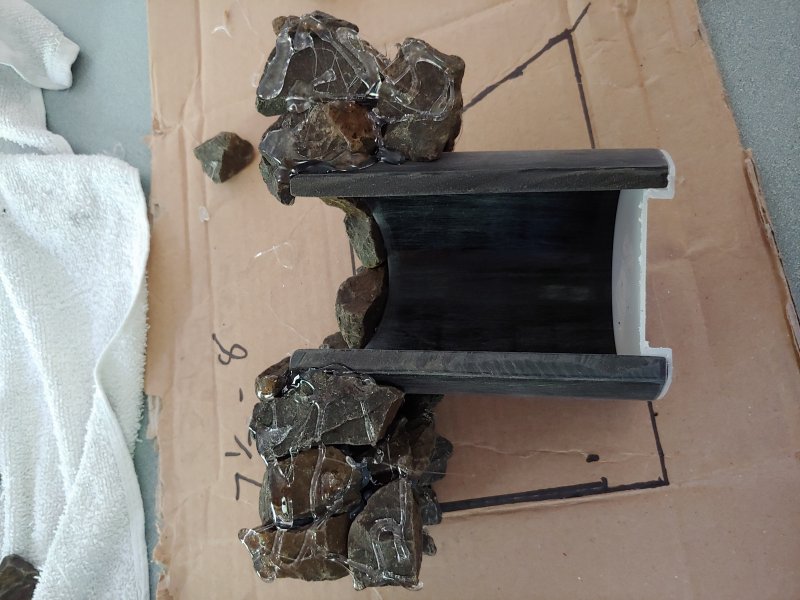 After it all cooled I rinsed it. Use cold water if you do this, hot glue, while generally aquarium safe, will release it's hold in real hot water.

Then I carefully scooped the corner into 2 Tupperware containers and buried my new cave: 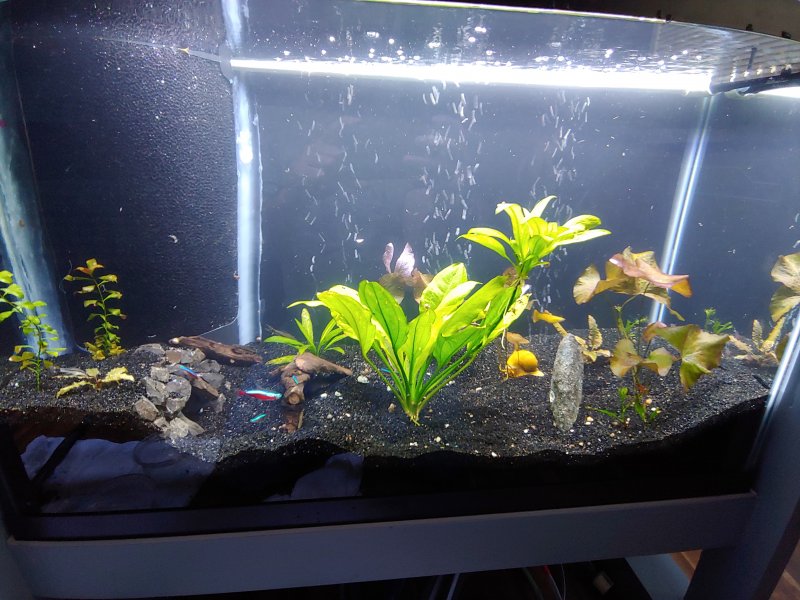 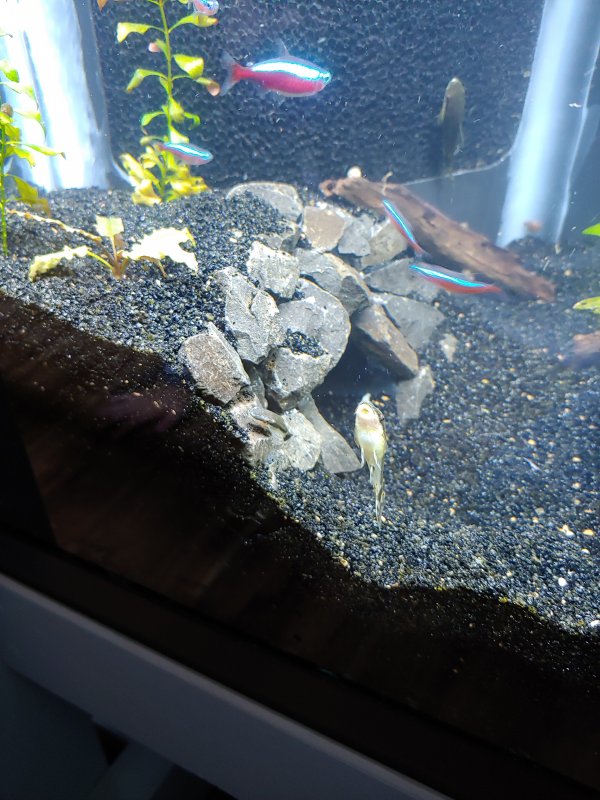 Most of the clouding is from replanting, if you use the lid on your containers whole adding sand it clouds very little
Hopefully this little guy decides my cave is worthy: 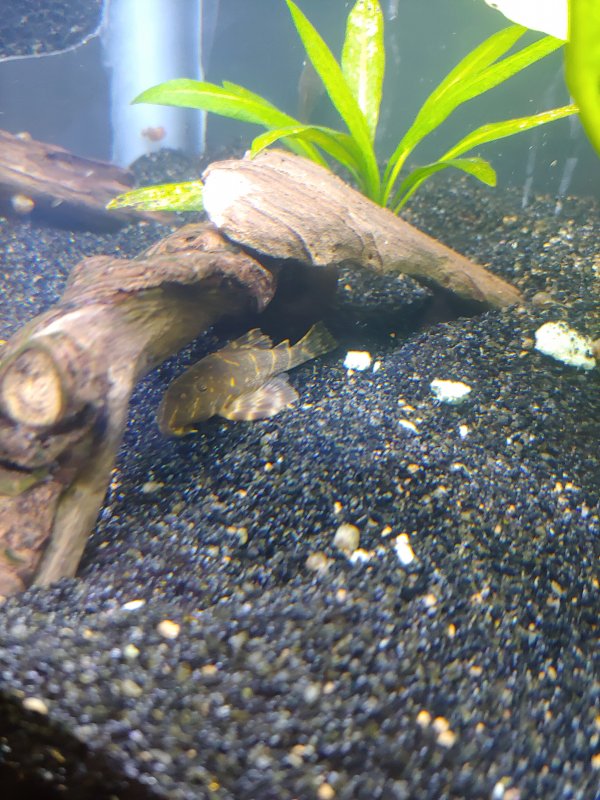 It was a pretty straight forward build, I seeded it with sponges from my wet/dry system so I think it'll be ok with some attention to the water quality as should always be the case anyhow. Wish my new fish friends luck getting medicated up and healthy, if all goes well they will be mixed in within 3 months as I re-arrange and adjust my networked tanks.
OP

Clown did indeed give in and move into the new cave, I lured him out with a a wafer chunk. Here are a couple pictures after the water settled from planting: 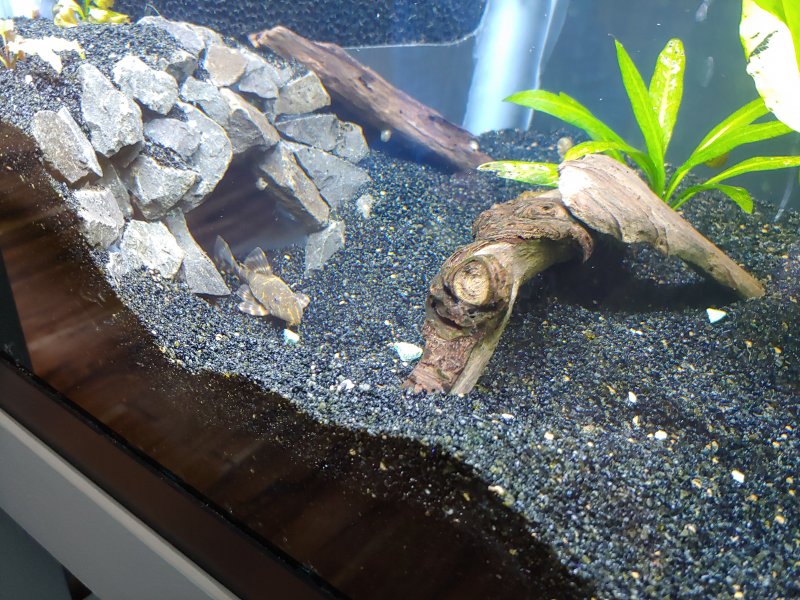 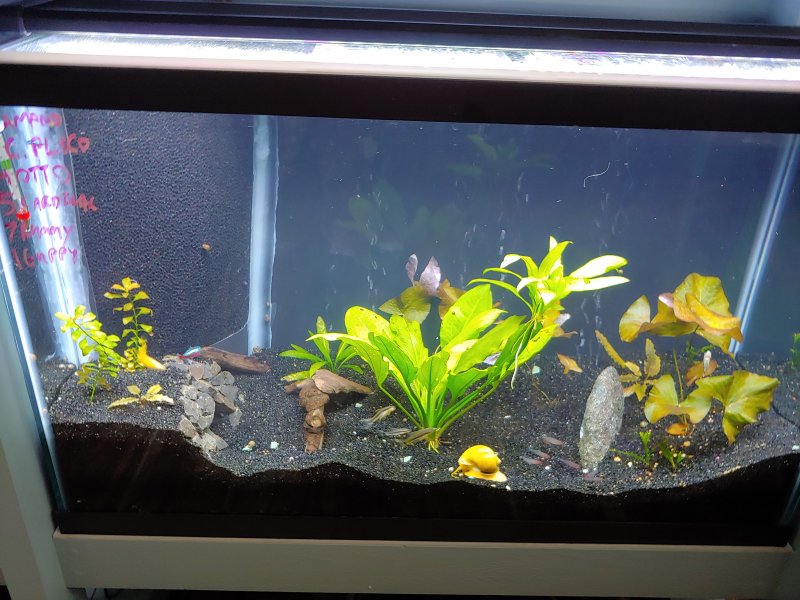 Sadly the water is now that classic shade of blue, I am treating for suspected worms or parasites (possibly why he had random deaths for the last 6 months), and ich that was observed on some of the rummynose school. I'm running basically the co-op med trio. The overly aggressive guppy has been put into a large breeder net for the duration of treatment and once clear I will try him with some silver tips or rasbora. He had continuously attacked Cardinals, even after increasing their school size to near appropriate (I didn't want too many more, I have seven that will be joining then after the tanks qt) today I even saw him dividing the school and chasing them down one at a time, multiple fins on multiple Cardinal were damaged within a minute or so, in came the jumbo net. I believe he has an aversion to blue for some reason, I have not seen him chase a rummy, or an Otto, and hopefully he will get along well with fish if a different color in one of my species tanks.

Anyhow, thanks for checking out this build, I will update here if the hardware has any issues so if you follow along on your own build watch this thread for updates. Enjoy the build.

I'm following, that cave in pretty unique and I might steal that

I really like that! I love the cave idea. I might want to try that someday.
OP