Scar tissue ? Have tried many things

stats and such
ammonia has generally been 0 for last several month had a slight reading after first antibiotic thought had hurt filter retested ok.
nitrate 0
nitiites ..ehh well they do creep up to 40+ but that’s water change day and similar in all my tanks.

water is changed weekly 15 gallons on a 55 gallon tank heavily planted and even a bit overgrown at times. I also will do a mid week change on this tank as it is heavily stocked.


can see the whitish edges almost looks like a scab that wants to peel off. No flashing or rubbing on decor at all. 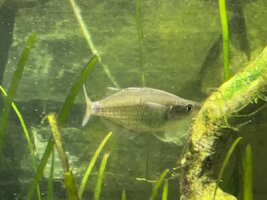 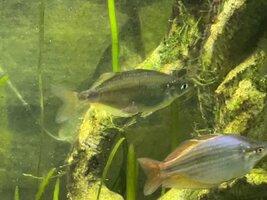 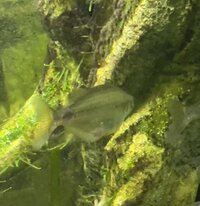 as she swims away can kind of see how thick it is...


im thinking its scar tissue from nipping early maybe was infected and is just going to be like that ? Anyone seen something similar. She is active in feeding and spawning.

Looks like a healed abrasion to me.
Maybe scraped up while trying to avoid an aggressive male?
I don't think there is anything to be done about it other than upping the water maintenance & nutrition quality.

thanks kind of what I was thinking.

my goal is to reduce the rainbows down by net 2 removing the three Australians and adding 1 male zig zag so it will be 2-4 ratio males can pick on each other instead of the gals.

that’s is the spot that gets nipped at for sure which is partly why I thought scab like.

also the shark will be moved it’s just getting to it ..

Update - got worse and then better ,..almost there.

it was getting better but then got red and looked inflamed so I pulled her and put in hospital tank and did another round of API fin and body cure. Followed by this last week of feeding her blood worms every-other day, she loves them and is eating anything I put in. redness is gone and the “scab “ is reduced in size and thickness. Giving her another few days and back to general population!
You must log in or register to reply here.

Jan 4, 2019
AquariumX
Platy Exposed To All Yuckies, How Long To Treat