Member
haven’t been here in awhile so here a Video of all my tanks!

I see you have some of coralbandit rams, little terrors.
You have surely proved all the naysayers wrong, when it comes to keeping Discus in a Planted Community.
I am sure you mentioned it but what is that black fish with the whiskers at the one minute mark?

Member
That’s a feather fin squeaker. It’s a synodontis catfish. Great fish plays with the loaches all day. He’s about 8-10”. Started at about 1 1/2”.
Thanks folks!! Allways glad to here from you guys. I like to show how the tank is still going. There’s a lot of people who say you can’t keep discus in a planted tank. As you can see it can be done. But also you won’t get all big discus. Yes some will grow but some will stop at the 5” size. For me it’s been 50-50.
Just want to put up a few pics of some dither fish I’ve gotten from coral and DarkOne.
Dippiedee here’s some pics of the rams in the new tank. Also they are in the video . 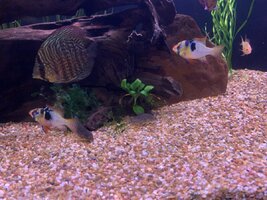 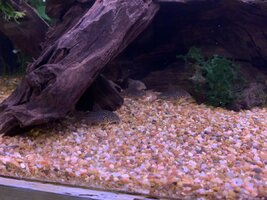 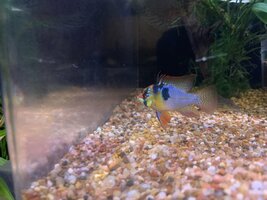 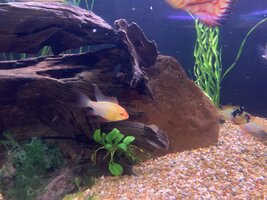 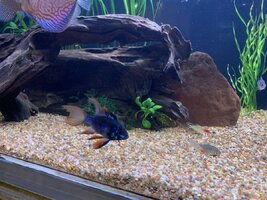 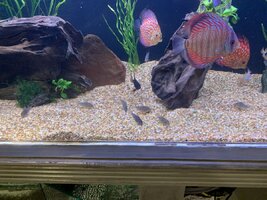 And this group of rummie noses started this tank. 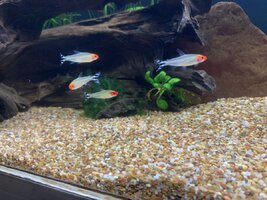 Member
Wow all I can say I’m speechless how well everything’s grown in and done well. I gotta say gravel intimidated me at first. I like seeing that successfully being done,

Member
Did you get 8 more recently? I thought I saw you had some new ones from Hans in a bb grow out.

Hey Gamer didn’t see your earlier message. Yes gravel can be done. Yes I bought 8 from Hans in June and 4 from Kenny in sept. So I’ve got 12 more growing in a new 125. That you with the boxers? 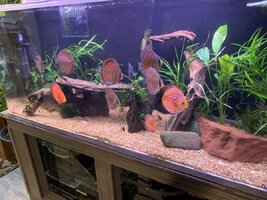 Member
I wish I had a fish room now for more discus.

I am down to one now the really dark reverse brindle Blackjack.

but I thought you had one bare bottom tank in your fish room.

Member
I had a 45 I was using as a grow out tank that was bare bottom. That was it. Not into bare bottom. Many are but to me it’s just to plain. My tanks are planted. I vacuume the substrate when I do water changes.

Member
put the red tigers back in after a failed month in the breeding tank. Noe there trying to redo the pecking order . And a quick view of the original tank.

86 ssinit said:
put the red tigers back in after a failed month in the breeding tank. Noe there trying to redo the pecking order . And a quick view of the original tank.
Click to expand...

Is Freeze-Dried So Bad?