Notes: Made famous by legendary aquascaper TakashI amano in his book ‘Nature aquarium world’, this popular freshwater shrimp is the ideal addition to a planted aquarium. They are effective algae eaters, and are gregarious in nature so they should be kept in groups of 3 or more.

Many fish medications contain copper which is poisonous to all invertebrates – so keep them out of your hospital tank. They’re Bio-load is minimal, and you can add a few to a stocked community without overstocking quite easily.

They will eat algae and bottom feeder tablets. It is beneficial to have some kind of moss for them to hide in, Java moss is excellent. Be careful not to keep them with fish large enough to eat them, loaches, puffers or other invertebrate eating fish.

Top Left Image: This species spends a lot of it's time wandering around the substrate.
Top Middle Image: This shrimp looks like it's eyeing up that algae!
Top Right Image: Far from ugly, this interestign little invertebrate can make a perfect addition to a peaceful aquarium.
Bottom Left Image: You can see the yellowish stripe that runs along the top of an Amano Shrimp's body.
Bottom Right Image: Java moss is great for shrimps - this one looks like it's just come out of it. 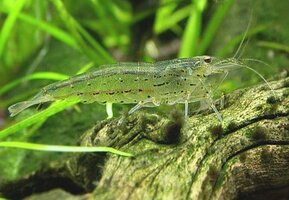 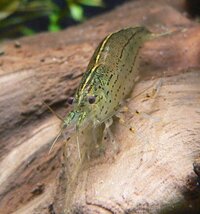 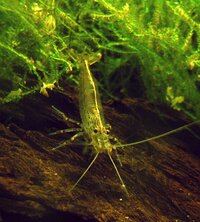 Do I Have To Feed Amano Shimp?