Common names: Red Rainbowfish, Salmon Red Rainbowfish, Scarlet Rainbowfish, Red Irian Rainbowfish.
Size: 12-15cm
pH: 7.0 – 8.0
Tempº: 22ºC - 28ºC (71 F - 82 F)
Tank region: Middle layers
Origin: Indonesia
Gender: Males are bright red; females are more silvery. Males also develop the characteristic high back as they grow.
Notes: This beautiful Rainbowfish is listed as 'Vunerable' on the ICUN Red List and has only been found in the Lake Sentai, New Guinea. Thankfully the species is thriving in the Aquarium trade; being one of the most common Rainbowfish in the hobby. The Red Rainbowfish is a schooling species and thus needs to be kept in groups; preferably with more females than males to minimise aggression between males. Due to it's potential size, this species deserves quite a large tank with plenty of open swimming space. Red Rainbowfish also benefit from the addition of plants to the aquarium; providing a quick retreat when they feel threatened. This Rainbowfish is quite a peaceful species, and makes a good community fish but it's large size can spook small, skittish species. Ideal tank mates include other Rainbowfish, large Barbs and Catfish but due to it's peaceful nature the options are relatively open. Red Rainbowfish prefer their water slightly more alkaline than most other species, but are perfectly happy at neutral pH levels. This species is an omnivore and will happily take most Aquarium foods. There are very few species better suited to a large community tank, and the Red Rainbowfish's vibrant colours paired with boisterous activity make it a very entertaining species to own. 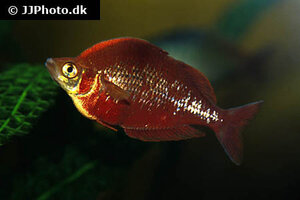 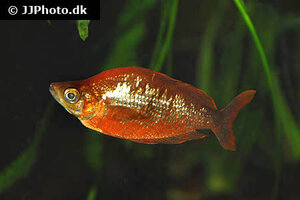 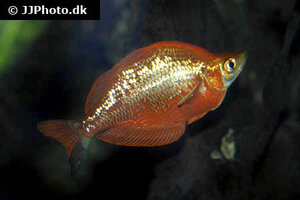 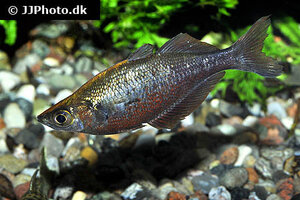 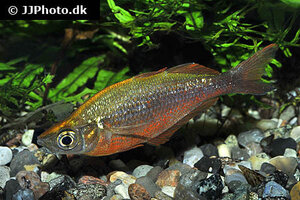 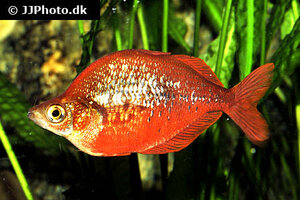 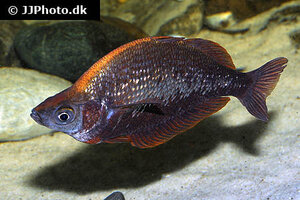 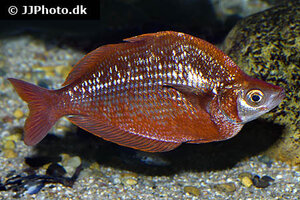