There are over 2000 identified species of the Cyprinidae fish family (the barb fish species) and the cyprinids are probably the largest group of fishes in the wild.

The water requirements varies from species to species with some such as the Goldfish and the White Cloud Mountain Minnow doing well in sub-tropical water temperatures. Some of these fishes get very large, such as the Tinfoil Barb and the Bala Shark. Others, like the Harlequin Rasbora and the Zebra Danio, stay on the small side.

Some can make good commnunity tank mates whereas others may not be the best choice in a community tank setup. Some that you should think twice before adding to your community aquarium would be the Red Tail Shark and the Tiger Barb. The Rainbow Shark can sometimes be very territorial as well. The "freshwater" sharks are listed here. 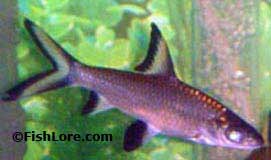 Balantiocheilos melanopterus
Bala Shark
Gets big and likes to be in schools making optimal care conditions difficult in the home aquarium.

Rasbora einthovenii
Brilliant Rasbora
They are very peaceful, and need to be kept in a school of at least 6. They are relatively uncommon in the aquarium trade.

Clypeobarbus congicus
Congo Barb
This species is rather unusual in the Aquatic Trade. It can be exceedingly shy when introduced to the Aquarium, so it is important to give it ample plant cover and lots of caves.

Oreichthys crenuchoides
Drape Fin Barb
This peaceful schooling species can be quite shy, making it largely unsuitable for communities of big boisterous fish.

Trigonostigma espei
Espe's Rasbora
These popular rasboras look a lot like the slightly larger Harlequin Rasbora, having a bit more red on the body.

Puntius filamentosus
Filament Barb
Large, hardy and active are three of the first words used by aquarists to describe the Filament Barb. 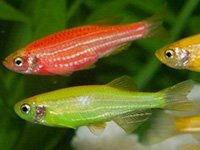 Danio rerio
Glofish
The Glofish were genetically modified with the purpose to detect environmental pollution. Scientists were able to inject a fluorescent protein gene (from marine organisms) into the zebra danio embryos to create the glofish.

Danio choprai
Glowlight Danio
A great addition to a community without any fish large enough to eat it. 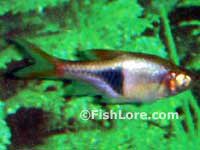 Cyprinus carpio
Koi
This is a pond fish and not suitable for most home aquariums unless you're wintering your koi indoors. 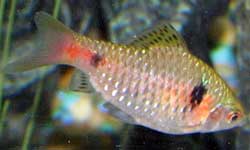 Puntius sp.
Odessa Barb
A beautiful barb that is quite colorful. Not very common at the local fish store.

Epalzeorhynchos frenatus
Rainbow Shark
Best kept as a single due to aggression with members of the same species.

Rasbora Borapetensis
Red Tailed Rasbora
As with all rasboras, they enjoy the company of at least 5 fish of their own species. 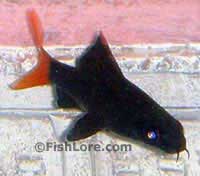 Epalzeorhynchus bicolor
Red Tail Shark
Another "freshwater shark" that is very territorial and will not do well with other red tails.

Barbus conchonius
Rosy Barb
Also known as the Red Barb, this fish should bring lots of activity to a tank. 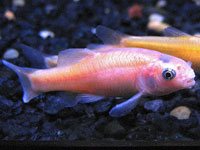 Pimephales promelas
Rosy Red Minnow
If being used as a feeder, they'll need to be quarantined, and medicated so that it will not pass on disease to your larger fish. It is best to breed your own rosy reds if you plan on using them as feeders.

Sawbwa resplendens
Rummynose Rasbora
Males have a blue and red body, females are all silver. Females aren’t always imported, as they are not as colorful as males. 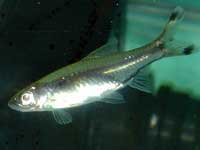 Rasbora trilineata
Scissor Tail Rasbora
Named for the unique motion of it's caudal fin that moves like scissors. 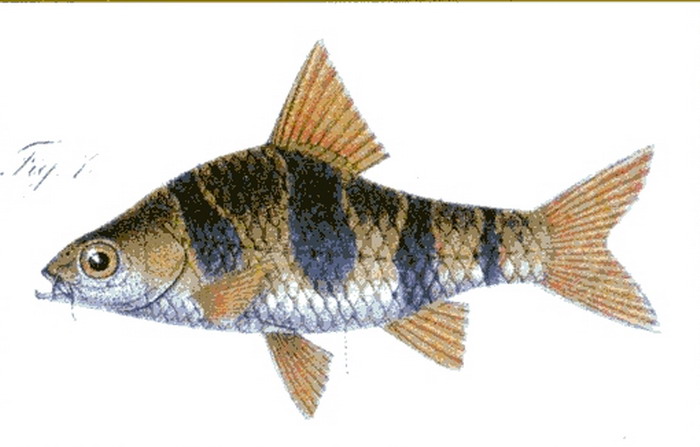 Puntius rhombocellatus
Snakeskin Barb
The exotic looking Snakeskin barb is quite hard to find in Fish Shops, but is much sought after by aquarists.

Puntius johorensis
Striped Barb
One of the larger Barbs, the Striped Barb makes an excellent choice for a larger community aquarium due to it's peaceful nature. 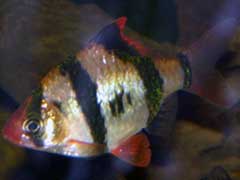 Puntius tetrazona
Tiger Barb
A notorious fin nipper that doesn't do all that well in community tanks.

Barbus schwanefeldi
Tinfoil Barb
Likes to be in schools but gets too big for most freshwater tanks. The Tinfoil Barb pictured is a juvenile.

Tanichthys albonubes
White Cloud
Mountain Minnow
Can tolerate colder water temperatures and can be very active and easy to breed. 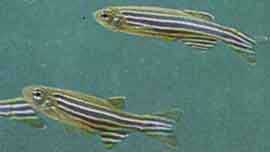 Danio rerio
Zebra Danio
Another very popular freshwater fish that used to be used to cycle new tanks. We don't do that anymore, right?