DISCLAIMER: I have not done any actual tests or experiments with Sculpey polymer clay, I put the cured pieces in the tank without any thought. It may not work for all aquariums/fish.

So I don't see a ton of threads with people mentioning polymer clay for DIY decor, I know I have been bombarding them with my Sculpey ideas though lol. I would like to make this thread so that way it would be easier to direct people who might be kinda curious about it.
When I got my betta fish, the first two pieces of clay I made for him was in his three gallon eclipse tank (got my betta Dec. 29th 2015, began polymer clay sometime in Jan. 2016). I still have those pieces of clay and have been using it in all of his tanks. I have no idea if it is actually doing anything. But my fish is still alive and well. My two nerite snails seemed to be doing fine, though one did pass on Dec. 1st, the other is still alive and active, I got them both in Jan. 2017. From all of the research I have been doing, polymer clay is a very pliable, non-toxic, and soft material unbaked, but once it has cured in an oven, it turns into a PVC like material. The only reason why Sculpey clay is not food safe is because of the porous surface that could house bacteria, which is good for aquariums. I have baked my pieces with tinfoil to hold the shape, I have sanded down rough edges, and cut the hardened material to make logs and smooth surfaces. My pieces go in and bake for thirty minuties to an hour, the thickness of my clays ranges between centimeters to inches. When I get done drying, sanding, cutting, rinsing, and drying again I rub it to see if it feels like its no fully cooked. If undercooked will come off on your hands a little usually and still be pretty flexible. If done right mine usually has a crack or two and it pretty hard, nothing rubs off. I have begun using the colored clay for themed decor, Sculpey III, but mixed a lot of the Original Sculpey (white) in with it, about a 1:3ish ratio (cautious about the dyes). I tend to overbake my clay a bit even though it is advised not to (sometimes it cracks a little).
On the Sculpey FAQ page, it says this:
Q: "Can I use your clay to make items for my aquarium?"
A: "While our clays are non-toxic, we have not done any testing on any of the products to be used in aquariums."
Even though they have not tested it, many people have and had no obvious ill effects. I believe they also used it in an episode of "Tanked".
In conclusion I believe polymer clay can make a good piece of aquarium decor (if overbaked a bit and handled properly). I think if it did any harm then my small fish would be dead already and so would the small snail, just my opinion. Here are a few website forums that may also help:
Trying out Sculpey caves - The Planted Tank Forum 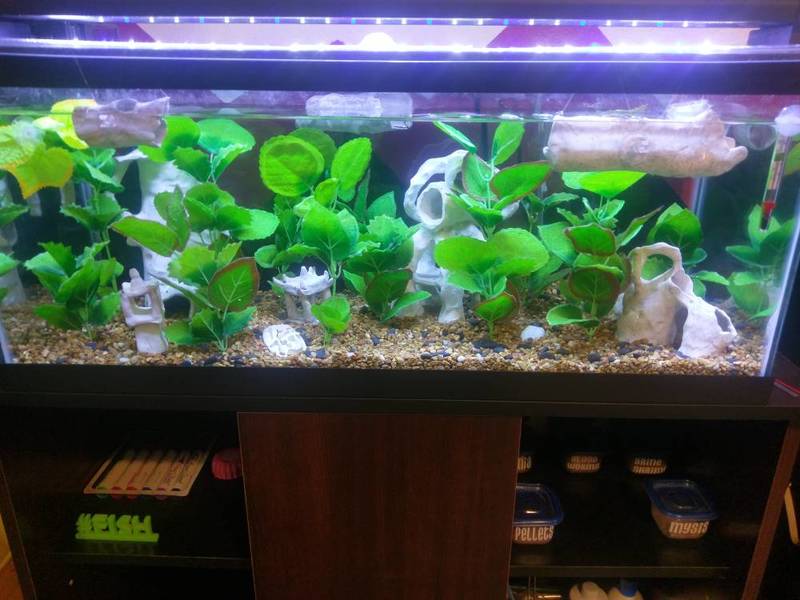 (I hot glued the edges of all of my plants so they wouldn't fray...I wonder if hot glue is safe...)

Thank you to those who have read this, I was really nervous about posting this idea because I don't want to give advice and end up killing people's fish, I hope the disclaimer made that clear lol.

hot glue is safe I belive

I am going to t
ry this, with that acrylic spray you suggested, Brett.

So cool! Definitely trying next break

Thank you for sharing! Would love to also add some colour, what is this acrylic spray? Brett S. , MrFluffie

KiwiEnthusiast said:
Thank you for sharing! Would love to also add some colour, what is this acrylic spray? Brett S. , MrFluffie
Click to expand...