Neglected Oscar tank- what can I do to help in 1 afternoon?

I went to a restaurant I've never been to before today and they had an Oscar tank that immediately caught my eye. There's one Oscar and a common pleco in it. I didn't get a good photo of the tank, but here is the "little" fellow: 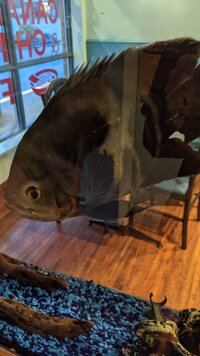 I'm not sure exactly how big the tank is. I would estimate about 120 gallons. I do know that it is barely big enough for him to turn around in. His tail fin gets folded against the glass when his nose is touching the other side.

I spoke to the owner, he bought the restaurant... Maybe within the last year? The Oscar (and presumably the pleco as well) is about 9 years old. The tank has what looks to me like a fluval 30(?) (external canister) for a filter, a heater, and an air line. The air line doesn't have an airstone, and is either dying or blocked since it barely works. The outflow for the filter is a spray bar, but it's about 4" below the surface. There is almost zero surface agitation. The inflow and outflow of the filter are both caked with algae.

I spoke to the owner, and he knows nothing about keeping fish. He has never done a water change, only topped up the tank from evaporation. I doubt he uses water conditioner. I don't think he's ever cleaned the filter. I think he said he has a siphon, but has never used it. There is a lot of old poo in the gravel.

He thought the pleco would eat the waste. He has never fed the pleco, but luckily there's a good large piece of driftwood in there. I don't know what he feeds the Oscar, but I saw a stray shrimp pellet on the lid.

I don't know much about Oscars or cichlids in general, as I've mostly kept smaller community fish, bettas, and axolotls. But I can tell that he is not in great condition, despite being old(?)

HIs fine are all ragged. Most of his colour is gone. He seems very stressed out from the small space, but there's not much I can do about that. I'm not sure if this is a skin infection or part of normal colouring, but it looks off (the black spot ringed with orange). 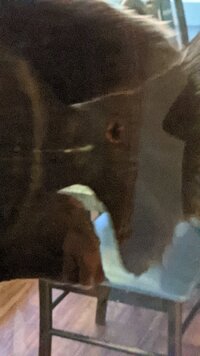 He appears to have a parasite on one of his fins, the white thing is between the spines of the fin 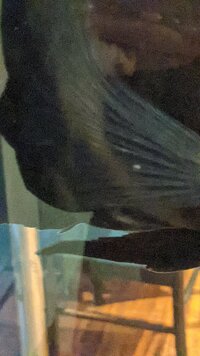 And I didn't get a picture, but his gills may or may not show signs of ammonia poisoning, again I'm not sure if that's a normal part of their colouring. I'm also not sure how much oxygen they require.

There is a good chance that the pH is very acidic, and that is what's keeping the water safe while presumably being very toxic. Our city water is 7.2 ph, 0 gh, 1-2 kh.

I asked the owner if I could please come clean the tank up, for free, because I love fish. He was surprisingly totally down, and I made arrangements to come back in a few days. Obviously I cannot do everything in one day, since that would disrupt the delicate balance everything is currently in. So, what should I do?

Right now, my thought is to clean the algae off the inflow and outflow, and get the air flowing properly + add an airstone. Otherwise, I'm not sure what would be the best, gravel vac or cleaning the filter (by clean, I mean squeeze the gunk out of the media). I don't want to bring my own tools, since I know my system has mycobacteria/fish tuberculosis, and I don't want to spread that to his system. So if he doesn't have a siphon (not sure if I understood him right), I won't be able to gravel vac anyway I guess.

How big of a water change could I get away with doing? I'm going to go out on a limb and say that nitrates are 160ppm+, but I will bring my test kit.

I'm also going to try to educate, in the simplest way, the little things he can do to keep the tank healthier. There is a language barrier, and whatever I do will hopefully have immediately noticable results/improvment to encourage and model what he should be doing in the future.

I was also going to bring some water conditioner, sinking wafers, carnivore crumbles, and frozen brine shrimp/bloodworm cubes. Would that be okay? Would the frozen food potentially cause more issues getting stuck between the gravel?

I also have meds I could bring, but I'm not sure I want to start messing with the balance of the tank to treat things that are not causing life threatening illness.

I would love to hear thoughts from people who keep oscars, common plecos, or who have rescued neglected tanks. Please! I'm all ears

That spot on the tail i am quite sure is coloration. Definitely should do some sort of water change. Ideally the vac and filter too. I would go with the vac first personally, if you have the equipment. Filter if you have time.

Good on ya! Both species are pretty hardy, as proven in this scenario. I would say a water quality test would be a good start. As you had mentioned, I wouldn’t clean too much at once. This may be a multiple trip cleaning. He does look a little on the malnutrition side, as he doesn’t have a lot of Orange coloring. If it were me, I’d feed him some feeder fish for a nice boost of nutrients. Good luck.

a new toothbrush or other brush from the dollar store.

if the tap water is very soft, you can add some crushed coral or crushed seashells to the substrate. and a small bag inside the filter.
You must log in or register to reply here.

Help.. My First Oscar.. Rescue Looks Weird!! What Is He??

Is Driftwood Needed For A Bristlenose Pleco?