The axolotl is a fascinating creature, one of the few salamanders which are fully aquatic. The Axolotl salamander is sometimes referred to as the Mexican Walking Fish, but this is not a proper name, because they are not fish, but amphibians. Originated in Mexico, 'axolotl' is derived from an Aztec word meaning water dog.

However, with the expansion of Mexico City, the axolotls' native lakes are almost gone, so they are highly endangered and rarely found in the wild. Any specimen found in aquaria has been bred in captivity. The good news is that they are actively being bred, because of their use in science. They are one of the few animals who can fully re-grow a lost limb, and although they grow large, they never leave their larval stage, as most salamanders do. Axolotls come in several different colors, including grey, black, brown, white and gold albino, and pink.

The axolotl has teeth that are made for gripping, rather than tearing. This enables them to hold a squirming, slippery earthworm with ease, but makes it hard for them to bite any food that is large. Therefore, only feed what they can fit in their mouth. Many axolotl owners hand feed their axolotls. This can be done easily, and although the axolotl may latch on to your finger, their teeth are not strong enough to pierce skin, and it does not hurt.

Provide your axolotl with many hiding spaces, and be wary of using aquarium plants, as they tend to uproot them. They can also be sensitive to sudden bursts of light, so gradually turn on lights around the tank before the tank light goes on. You also want to provide them with a dark bottom, whether this be a sheet of black paper under the tank or darkly colored gravel. 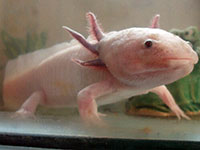 Care-level: Easy to medium, not the best for a beginner, but not only for experts

Origin/Habitat: Originally in Lake Xochimilco and Lake Chalco, Mexico, but as Mexico City has spread, and these lakes diminished, they are rarely found in the wild, and all specimens are bred in captivity

Temperament / Behavior: may be slightly aggressive towards its own species, but usually peaceful

Breeding: Breeding takes place about twice a year. Axolotls reach sexual maturity around 7 inches long. It is generally not recommended to breed them, however, until 18 months of age and above 12 inches long. Great strain is put on females after breeding, and they should only be bred after they stop growing, and kept away from males for many months after breeding, or they may fall ill. A good way to stimulate breeding is to keep the male and female in separate tanks, then transfer them together to a tank about 5*C cooler than what they were in before. Up to 1000 eggs may be laid at once. The eggs should hatch after 17 days.

Compatible Tank mates: Tank mates are not a good idea. Anything smaller than the axolotl will be eaten and other fish are very likely to nip at the axolotl's feathery gills. Juveniles are best kept alone, because of cannibalistic tendencies, but once they reach adulthood they can be kept with other adults

Fish Disease: Signs and treatments for some common freshwater fish disease When water temperature is too high, they will refuse food and develop white patches on the skin. This can be treated best by lowering the temperature, and as you would treat a fungus. Rapidly moving water is one of the most common causes of stress related illness, and the first sign of this is forward turned gills.

Fish Food / Diet: The axolotl is carnivorous. Adults are best kept on a steady diet of organically raised earthworms, blood/ blackworms, and soft, sinking trout pellets. Younger axolotls need to be fed live food, such as white, blood, earth or blackworms, or daphnia.

Gender: females will be rounder when viewed from above.

Tank Size: 20 gallons minimum (larger tank needed as they grow), and longer rather than taller tanks are appreciated

Substrate: Axolotls are known to swallow aquarium gravel, causing blockages in their gut, which can prove to be fatal. If gravel is to be used, it needs to be larger than 2 cm in diameter. Fine sand is an option, but they can find it hard to grip, which can be stressful. Axolotls dying from swallowing gravel is rare, but not rare enough to risk it.

Filtration: Over-filtration is a common problem in axolotl tanks. While they are large waste producers, they are highly sensitive to water movement. It is best to buy a filter made for the size of the tank you have, and provide slightly more frequent water changes.

Similar Species: other aquatic salamanders such as Ambystoma species