Bucephalandra is a fairly new species of plant to the aquarium trade. It is a rhizome plant with growth and care very similar to Anubias. What makes it so unique, is the extremely wide variety of colors it can display, as well as having many different leaf shapes as well.

Native to Borneo, this plant prefers year round tropical temperatures. While Borneo stays warm year round, it's seasons are differentiated between the dry season, and the rainy season. Bucephalandra has adapted very well to this however, in that it can grow emergent on river banks, and then convert to fully submerged once the rainy season comes and the rivers fill back up.

While it can grow perfectly fine emergent, it will generally stay green. Interestingly, when fully submerged, that's when you'll start to see what makes this plant unique. Once submerged, the leaves will start to display much darker and more vivid coloration, ranging nearly the full color spectrum. It is not uncommon under the right conditions, for this plant to display purples, blues, reds, and golds. It also displays tiny pore like white dots on its leaves which add to its beauty. It should be noted that this plant is a fairly slow grower, and may only produce 1-2 new leaves per week, but in higher tech setups under optimum conditions, faster growth can be achieved.

For the home aquarist, keeping this plant is fairly simple. It is extremely adaptable, and will grow within a wide range of parameters. In lower light setups, it will generally stay closer to green. Once you get into the medium light range, and with some fertilization, it will show a bit more color. In high light, and with CO2 or a substitute like Excel, along with regular fertilization, it will really show its colors.

Being a rhizome plant, it can be utilized in many ways, but the rhizome itself must not be buried. It can be wedged between rocks or decor, or attached to rocks or driftwood. While it is fairly similar to anubias, its roots will grab much harder as in nature, it is used to some moderate current, so in that sense, it can even be grown on smooth rocks and such. When planted as a single plantlet, growth tends to be a bit more upright, especially if wedged between decor on the substrate. When attached to driftwood, and especially so with good water flow, it tends to make more of a mat, commonly called a clump.

One complicated aspect of this plants nature is species identification. Aside from a few of the more commonly known varieties, such as Brownie Ghost, Theia, Catherinae and Achilles, the rest is often a guessing game. There are so many species variants, and often it is found that they are named based on where they originated, or what colors they display, but unfortunately this is often decided by sellers and retailers, and a single species may end up going by quite a few different names.

One other very fascinating feature of this plant, is that if healthy, it will flower from time to time underwater. The flowers are usually trumpet shaped, similar to a calla lily, while a few varieties have flowers similar to anubias or peace lilies. They will also flower much more often than anubias, which makes them an exciting and unique addition to an aquarium.

One thing to consider regarding this plant is responsible sourcing. Due to its rapidly increasing popularity, and still being very new to the hobby, it has been and still continues to be collected aggressively in the wild in Borneo. Some species are near endangerment due to extreme over collecting. On the flip side, its popularity has also encouraged individuals to grow and propagate it, and it is becoming steadily more available through hobbyists as a result. If you decide to purchase, I highly recommend purchasing something that is captive grown to ensure this plant can still live in its natural habitat.

Pictured below are three varieties of Bucephalandra, attached to MopanI wood. The top section is the "Purple Comet" variety, followed by the "Brownie Phantom" variety in the middle area, and then the "Royal Blue" variety on the bottom. As of this writing, these plants have been in this tank for about 2 weeks. As they color up which can take a few months, I will update the photos. Special thanks to fellow Fishlorian Vyvid for providing some close up quality pictures in the comments below. 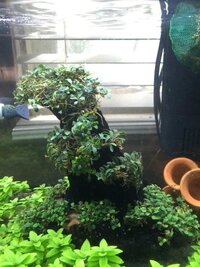 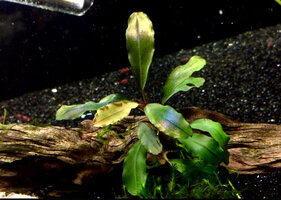 Here's the deep purples and blues and white spots he mentioned, and they flower sometimes!!! 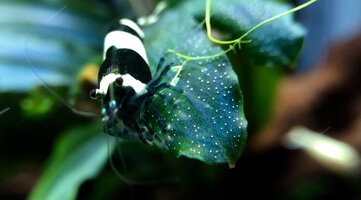 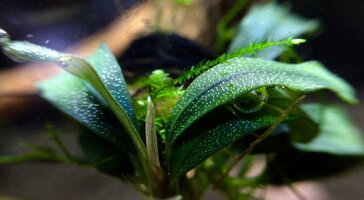 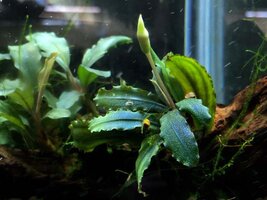 Here's the deep purples and blues and white spots he mentioned, and they flower sometimes!!!

That is awesome. Wonder where I could find some. I love plants in my tanks. 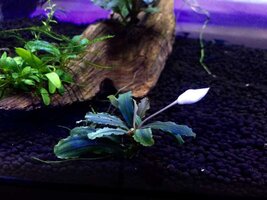 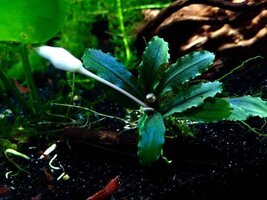 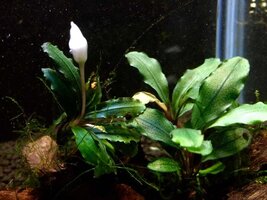 I don't use cO2 and mine have grown well. They grow slow, very similar to Anubs

Yeah the CO2 isn't required although it does help. I personally use excel, not a fan of CO2 injection. 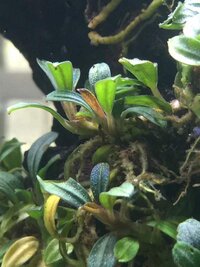 If you look at the leaf just below the very center of this picture, you can see some blue and purple starting to show. This one is the Brownie Phantom, which over time should turn a nice dark purple and magenta color. 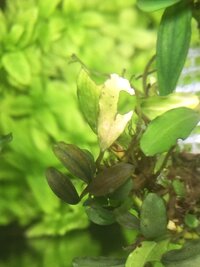 Here's some "Brownie Brown" getting its nice new growth of dark golden brown with hues of blue. 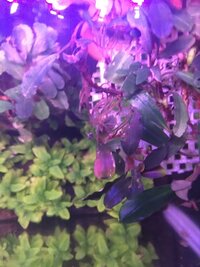 Here is some "Dark Wave" that I got. This one has been doing really good for me, getting nice bright red new leaves that turn to gold and then blue.

Here is some "Dark Wave" that I got. This one has been doing really good for me, getting nice bright red new leaves that turn to gold and then blue.
Click to expand...

I have a pair of dark wave just starting to color up ,my peacock so far is doing the best as far as color nice blue leaves.

Feb 24, 2012
Dino
What Makes Plants from Vishaquatics Different Than the Rest?

Dolfan has a good thread on Seachem plant fertilizers:
Seachem Fertilizers And What They Do