The Tang or Surgeonfish is one of the most popular fish families for saltwater hobbyists. There many color varieties of tangs along with many different temperaments and eating habits. Some surgeonfish are excellent eaters and others might make you want to pull your hair out because they won't eat what all the other fish in the tank are eating.

Offer then marine origin algae or nori. Some of the better algae comes enhanced with garlic or they are vitamin enriched. I can vouch for the Ocean Nutrition and Julian Sprung's sea veggies because I give it to my tangs on a daily basis (sometimes twice a day) and it gets devoured in minutes. I try to mix it up between the brown, green and purple seaweed when feeding the surgeonfish in my tanks. Check out the video of tangs eating seaweed below.

Generally speaking you don't want to keep saltwater tangs in smaller tanks because they are active swimmers and many of the tangs can grow to well over 8 inches as adults. Many of these tangs are ich magnets so inspect them closely at the store, make sure they are eating and only put one in an appropriate sized aquarium.

Plan on high water flow, give them plenty of algae to eat, only keep them in tanks that are big enough to house them as adults and research compatible tank mates thoroughly.

Acanthurus achilles
Achilles Tang
This is another tang that is considered very difficult to keep because it doesn't adapt very well to aquarium life. Hard to get on foods and is known as an "ich magnet". Definitely keep this tang with a cleaner shrimp species. 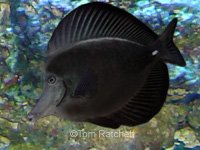 Zebrasoma rostratum
Black Tang
The Black Tang is an extremely rare tang that goes for ridiculous prices, anywhere from $600 to $1,500 or higher depending on the size. Considered just as hardy as the other Zebrasoma tangs.

Paracanthurus hepatus
Blue Tang
Another tang that needs lots of swimming room. They are always on the move and look fantastic. Try not to buy the very small ones though, they don't seem to adapt to the aquarium as well as those 2 inches plus in size. 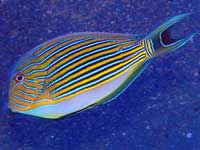 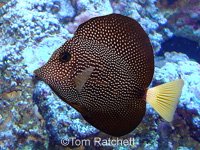 Zebrasoma Gemmatum
Gem Tang
The Gem Tang is considered hardy just like the other Zebrasoma tangs but good luck finding one to buy. If you do find this tang for sale be ready to pay several thousands of dollars. 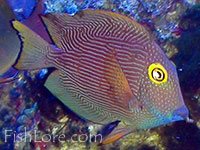 Ctenochaetus strigosus
Kole Tang
The Kole Tang will race around the tank all day long, so a large tank that can provide plenty of swimming room will be needed. 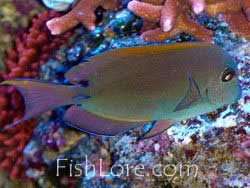 Acanthurus nigrofuscus
Lavender Tang
Often overlooked because of it's less striking appearance, it is a good looking tang once acclimated and fed a proper diet. The Lavender Tang looks amazing under the right lighting that can bring out it's pastel colors. Our pictures definitely don't do this fish justice. 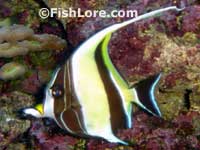 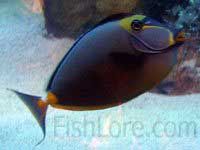 Zebrasoma veliferum
Pacific Sailfin Tang
Looks very similar to the Red Sea Sailfin, but the one collected in the Pacific doesn't have as many spots. Lots of marine algae and a very large tank are some care requirements. Check the profile for more care information.

Acanthurus leucosternon
Powder Blue Tang
Often sought after due to their beauty, the Powder Blue Tangs will quickly leave the uninformed hobbyist singing the blues if they are not prepared to care for this tang. 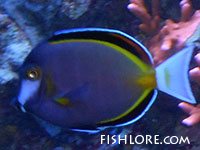 Acanthurus japonicus
Powder Brown Tang
Adapts to the aquarium much better than the Powder Blue Tang. 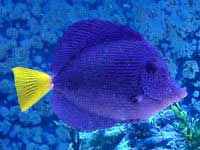 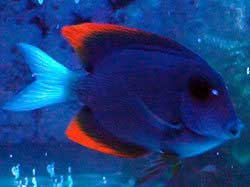 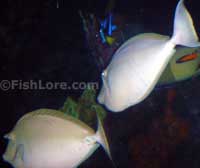 Naso unicornis
Unicorn Tang
Commonly named for the unicorn like projection on it's head. This is another big tang and needs a big saltwater aquarium. 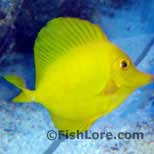 Zebrasoma flavescens
Yellow Tang
This is probably the most popular of all tang species because they might be the hardiest and their canary yellow color looks great. Like other tangs the Yellow Tang is prone to cryptocaryon (saltwater ich). They may be harder to come by and more expensive in the near future if pending legislation in Hawaii passes and bans the export of this species.