Here we present the livebearing fishes that are so common in the freshwater aquarium hobby. The guppy, platy, swordtail, and mollies are the mainstays of the freshwater world and the ease of breeding them has been implicated as one of the primary causes of a problem amongst fish keepers known as MTS or Multiple Tank Syndrome. This syndrome is not life threatening but it has been known to cause problems in smaller homes. Where do you put all those tanks?

Soon after getting a few of these prolific breeders, assuming you have a male and a female, you will soon have a tank full of small free swimming fry. If you have larger fish in the tank with them, these small fry will soon be eaten, even by the parents.

To successfully raise the young fish you will need a separate tank and/or a breeding trap placed in the tank. Breeding traps or breeding nets can be useful if used correctly. Unfortunately, it can be hard to determine the right time to put the pregnant female in the trap before she releases her babies. Placing her in too soon could cause her to stress. If you're serious about breeding these fish you would really need to have separate, bare bottom tanks set up so you could remove the adult female once she released the babies.

Please be responsible with your fish and keep the males and females separated, only get one gender or be prepared to deal with the large numbers of fish that will be coming your way.

Poecilia wingei
Endlers Livebearer
The Endler's livebearer species might be extinct in the wild. They have very similar care requirements as the guppy and the two are closely related.

Poecilia reticulata
Guppy
One of the first species for beginning hobbyist to breed. The Guppy is a prolific breeder that can be quite hardy and colorful as well. Keep males separated from females if you don't want baby guppies! 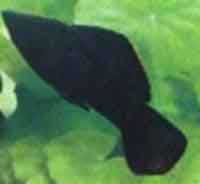 Poecilia sphenops
Mollies
Pictured is the black molly. These livebearers like some aquarium salt in the water and will give lots of fish babies. Be responsible and only breed them if you have a plan for what to do with all the fry.