The Three Stripe Damselfish is readily available and often quite inexpensive compared to other saltwater fish species.

Three Stripe Damsels usually go for about $3 to $7 at the fish store. Online they might be even cheaper, but after you factor in shipping costs maybe not so much. They are easily confused with the Dascyllus melanurus which is more commonly known as the Four Striped Damselfish. This one has 3 vertical black stripes, the other has 4 black stripes running vertically. 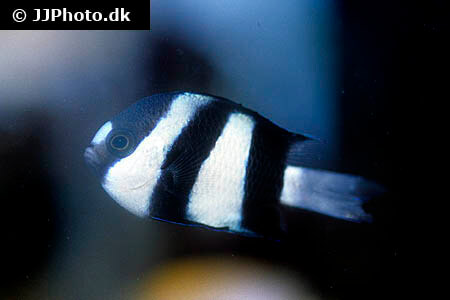 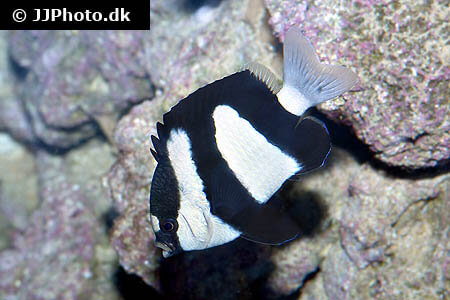 Similar to many other damselfish species, the Three Stripe Damselfish too have been used to cycle an aquarium or two. This is not an advisable practice nowadays though. It's so much easier (and better for the fish) to cycle with live rock or even some of the forumlations containing the necessary beneficial bacteria. Besides, after cycling your tank with these fish you may realize that you didn't really want to keep them (due to their aggressive nature) but you find out too late how hard these little guys are to catch. Especially in a tank with live rock. Forget about it. You will be removing some rock to get these guys out of the tank.

As alluded to previously the Three Stripe Damselfish can be quite aggressive. They definitely have the "little man" syndrome and will nip at much larger fish to keep them away from "their" territory. This is definitely not a community type fish. Choose tank mates wisely. Tank mates that are too big and these Three Stripe Damselfish become a nice snack. Stock them in with tank mates too little and they will pester the smaller tank mates.

Feed them a variety of fish foods and they should live a nice long time for you. This is definitely an interesting species in it's own right but needs to be kept in a stocking scheme that is well thought out before hand. Be ready to remove them if needed. 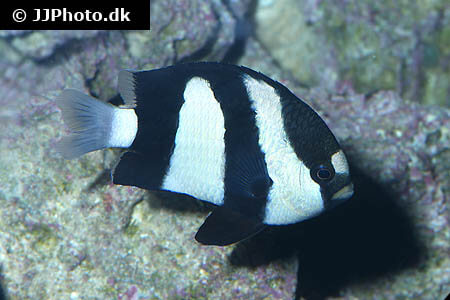 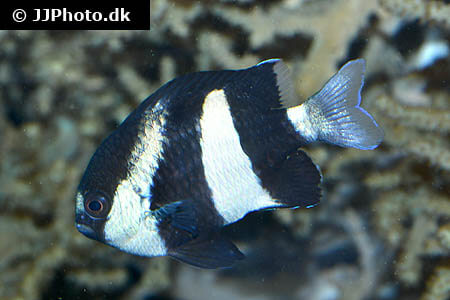 Care Level : Easy, good for saltwater aquarium beginners, but don't use them to cycle your tank! Using live rock is currently one of the best ways to cycle a tank fishless.

Origin / Habitat : From the Indo West Pacific and to South Japan. Often found living with the lemon damselfish Pomacentrus moluccensis.

Temperament / Behavior : Much like other damsels, this one can be aggressive and even more so as it matures. They may not tolerate other damselfish in the same tank and less aggressive tank mates may get bullied.

Breeding : Males form nests in the substrate and entice females to breed. Afterwards the males guard the eggs until they hatch and enter the water column. There have been studies on the effect of the lunar cycle with this species.

Tank Mates : Avoid keeping them in an aquarium with Lionfish, Snappers, Groupers, Triggers, Eels or any other predatory fish large enough to eat them.

Reef Tank Compatible? : They shouldn't bother the corals, anemones and other invertebrates. Some have reported that they will nip at hermit crabs and shrimp species.

Fish Disease : Saltwater Fish Disease - Diagnose, Symptoms and Treatment - This is a fairly hardy species like many of the other damsels. Using damselfish to cycle a tank used to be one of the advised ways of cycling marine tanks.

Diet / Foods : Omnivore - they will do best with a variety of foods. Small marine origin meaty foods along with some herbivore rations will be good for them. Frequent small feedings everyday are advised.

Tank Region : Middle to bottom and usually near cover of some sort. 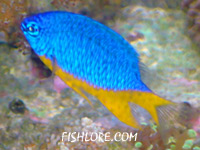 Chrysiptera hemicyanea
Azure Damselfish
Like most damselfish species, the Azure Damselfish is considered very hardy and often recommended to new hobbyists as a good first fish in new tanks.

Chrysiptera cyanea
Blue Damselfish
This fish is also known as the "Blue Devil Damsel" due to it's temperament. It's a good thing these fish stay on the small side at around 3 inches (6 cm). Use caution when stocking a tank with these little devils. 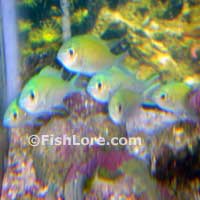 Chromis viridis
Green Chromis
One of my personal favorite saltwater fish species of all time. Photos hardly ever do our Green Chromis friends justice. You just have to see a school of them in person to appreciate their beauty and personality. They are quite peaceful except amongst themselves where you may see tests of dominance within the group.