The Six Line Wrasse (Pseudocheilinus hexataenia) is one of the wrasses that can be considered reef safe. The Six Line should leave your corals, clams, and most other invertebrates alone. They may get a little rowdy with new fish introduced to the tank, but more on that later. They have really nice coloring and markings. They have a purple/blue body with six horizontal yellow/orange lines. The caudal fin is often a shade of green with hints of yellow. The coloration on males may become even more vibrant when they are ready to spawn. 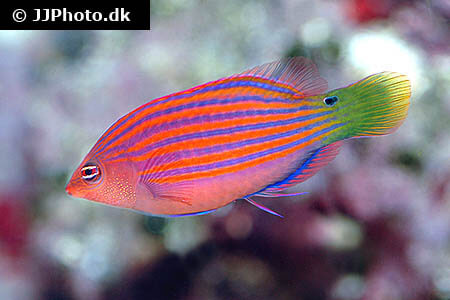 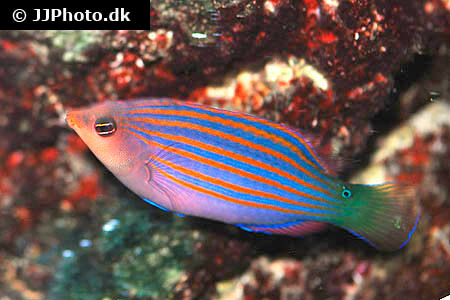 The Six Line Wrasse can be quite hardy if shipped and acclimated properly but they are known as "poor shippers" and online merchants may not reimburse you if this fish dies in transport. As always, it's a good idea to take your time and slowly acclimate your sixlined wrasse into your quarantine tank and keep them there for several weeks so you can get them eating and so you can monitor them for signs of disease.

Getting them out of a tank full of live rock is not fun. Use this time while they are in quarantine to give them highly nutritious fish food to help them overcome the stresses of shipping. If after several weeks in QT and you see no signs of disease you can slowly acclimate them into your display tank.

Behaviorally they may be kept in multiples in larger tanks but may get aggressive with other six lines in smaller tanks. Keeping them with other wrasse species is not recommended in smaller tanks (like less than 100 gallons). They should do fine with other marine fish species though but each fish can be different and you'll need to watch closely when first introducing them to your tank.

It is recommended that they are one of the last species introduced to your tank to help limit aggression. 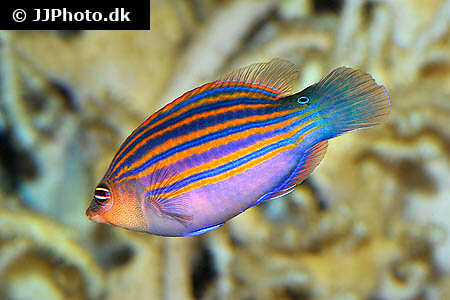 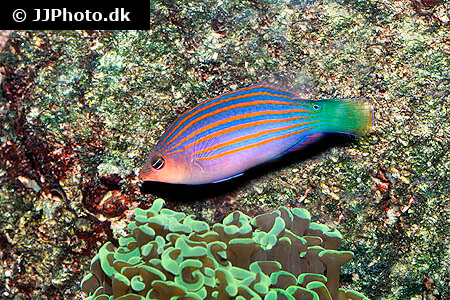 Feeding wise, the Six Line Wrasse is not all that picky and they should eat standard marine fish foods. They also will pick at the live rock in between meals. Six lines can also be used to help control the pyramidellid snails that are known to prey on your prized saltwater clams. 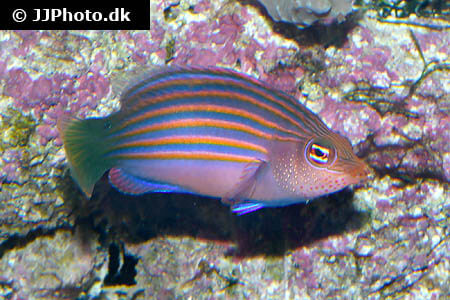 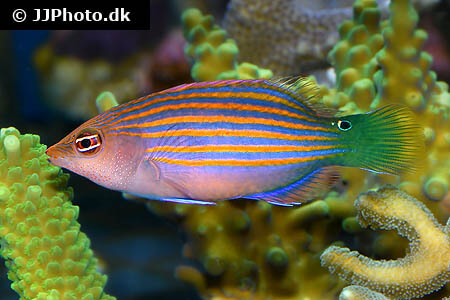 Temperament / Behavior : They can be peaceful if you introduce them last to your aquarium. They are considered semi-aggressive since they may scrap with other wrasses and similar looking tank mates.

Breeding : Although spawnings have been reported, we don't believe they've been successfully raised in captivity.

Tank Mates : Avoid mixing them in with other wrasses but if you do, watch closely for signs of aggression between the wrasses. Although they are considered one of the more peaceful species of wrasses, they may also harass other tank mates such as grammas, gobies, pseudochromis, etc. If you wait to introduce them last into your tank you may have a better experience with keeping them.

Reef Tank Compatible? : Considered reef safe in that they should leave your corals and other beneficial invertebrates alone. They may even act as cleaners (albeit rarely) on larger fish species in the tank. They may even help control pyramidellid snail populations if you're having problems with these snails and your clams.

Tank Region : Usually hanging around their turf on the live rock.

Gender : Males may become more colorful when ready to breed. 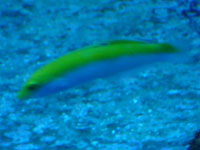 Halichoeres leucoxanthus
White Belly Wrasse
Sometimes mistakenly sold as the yellow coris wrasse, the white belly (Halichoeres leucoxanthus) is fairly hardy once acclimated but is still a prolific tank jumper. Many hobbyists have reported that they will eat montipora eating nudibranchs and acropora flat worms. 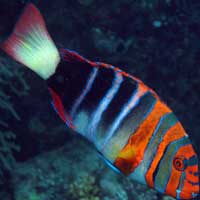 Choerodon fasciatus
Harlequin Tuskfish
These tuskfish can be quite pricey and those coming out of Australia will usually fare better than those coming from the Phillipines. If you have a large saltwater aquarium with the right mix of tank mates this species can be a great addition or center piece to a display tank.