The Regal Angelfish (Pygoplites diacanthus) is also known as the Royal Angelfish. It is one of those species that is highly sought after by more advanced saltwater aquarium keepers. It comes with a long track record of being known as hard to keep. They are also highly sought after because of their looks. They are incredibly beautiful and of all the fish I've kept or researched extensively over the years this is my favorite fish. 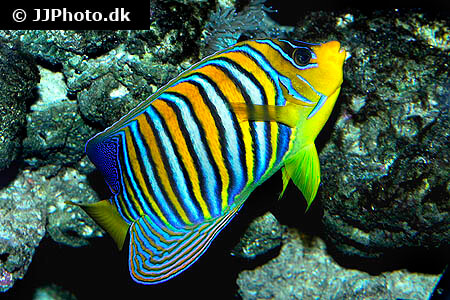 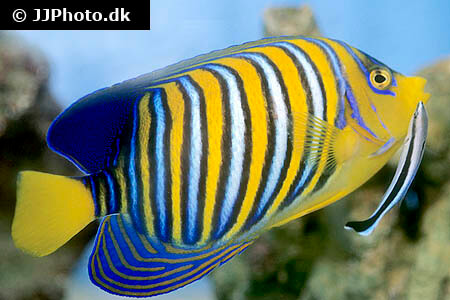 However, they should be avoided by most hobbyists because they do not adapt well to aquarium life. If you do decide to get one of these regals make sure you see them eating in the store first! Try to get one originating from the Indian Ocean instead of the Indo-Pacific. The Indian Ocean species seem to be able to adapt better to aquariums and feeding than their Indo-Pacific counterparts. 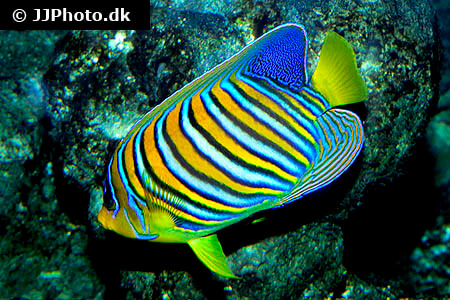 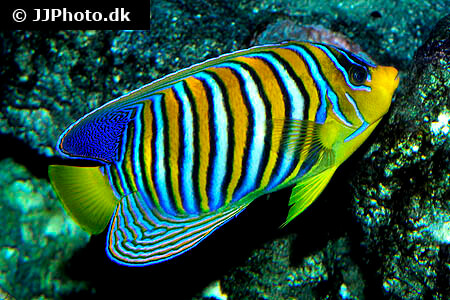 The Regal Angelfish is sold for around $75 to $250 depending on size and location collected. Since the Indian Ocean regals are adapting better they are going for higher prices.

Seriously consider taking a pass on this species unless you feel completely confident in your abilities to get them eating. Several companies are now making frozen marine angelfish food and that is making it easier for us to give the foods these angelfish need and perhaps make it adapt better to living in an aquarium. 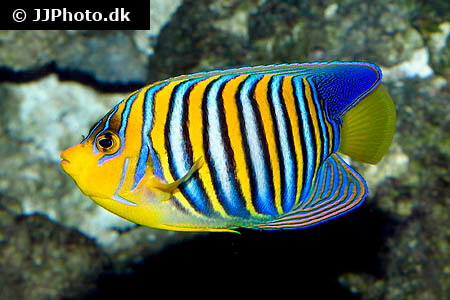 Queen Angelfish Care Level : Difficult, does not adapt well to the aquarium, hard to get eating.

Origin / Habitat : Indo-Pacific and Indian Oceans - found at depths of 1 to 48 meters in areas with high coral concentrations. Through analysis and DNA studies it is believed that they originated in the Pacific.

Reef Tank Safe? No - may nip at LPS, SPS and clam mantles.

Temperament / Behavior : May get bullied by other large angelfish species

Tank Mates : Introduce first to the tank and let it claim a territory if you plan on stocking it with other large fish species. Fish only and FOWLR type setups.

Food : Feed them several times per day with specialized marine angelfish formulas heaving in sponges. Mix in live foods such as mysis shrimp, brine shrimp, etc. Clams on the half shell, scallops or tiny bits of fresh fish may help get them eating. Feed them often.