The Red Fire Shrimp (Lysmata debelius) is also known as the scarlet cleaner shrimp and the blood red fire shrimp. This shrimp is a deep blood red with with antennae that are used to signal fish with their cleaning services. You can buy a fire shrimp for around $20 to $30 locally and online.

The fire shrimp will hang out on a live rock overhang and wave their antennae about waiting for fish to come up to them at which point they will clean the body, fins and gills of the fish. It is really quite the sight to see the red fire shrimp doing this. I like to keep a cleaner shrimp species in all of my tanks (reef or FOWLR) even though there are some things to keep in mind regarding keeping them with corals. 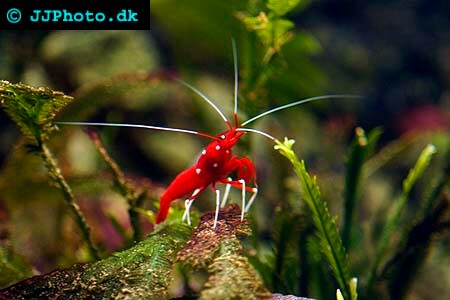 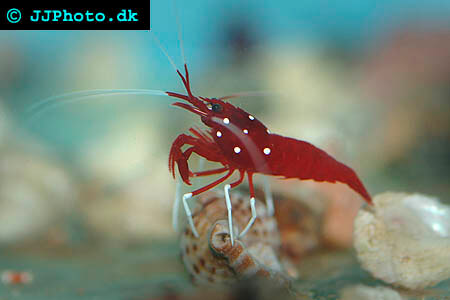 The fire shrimp has been reported to prey on corals - both large polyp stony (LPS) and small polyp stony (SPS) coral polyps. They are rather reclusive when the tank lights are on but come night time (while you're sleeping) they may be out and about crawling all over the tank nibbling on your prized corals. So, just keep this in mind if you have a reef tank setup full of expensive corals, they may be doing some damage to the corals.

The fire shrimp doesn't seem to be as active in the cleaning fish department as the skunk cleaner shrimp but they do in fact clean fish. I need to get a video up of mine cleaning the fish but until then check out youtube for videos on this cleaning behavior.

I personally don't target feed my scarlet cleaner shrimp since they will grab any foods that get past the fish. But if you don't see them eating when you feed the fish use a feeding stick to target feed them. They will scavenge at night too. You won't see them out and about very often in intensely lighted tanks, but in aquariums with subdued lighting you should see them more often. 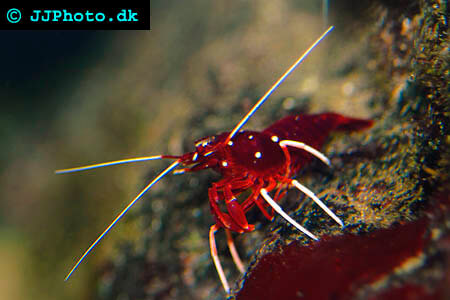 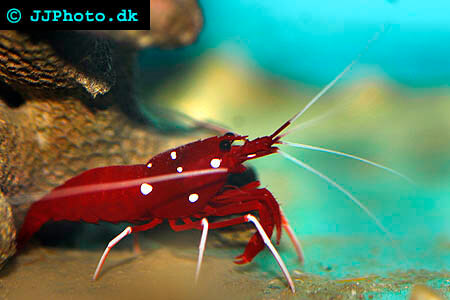 Keeping the fire shrimp with other fire shrimps can pose problems unless they are a mated pair or the tank is big enough to keep multiples. They may also bicker with other shrimp species.

Also, the fire shrimp will molt periodically, shedding their exoskeleton to form a new one. The old skeleton will be seen floating around the tank and may cause some to panic thinking their shrimp has passed on to shrimp heaven. Don't worry, they have just molted. Remove the old skeleton from the tank and discard. Some authors have reported that iodine supplements are needed for them to grow new skeleton. My advice would be not to dose iodine unless you have a test kit. If you are getting low iodine readings on your test kit, then dose. Otherwise, let it be. 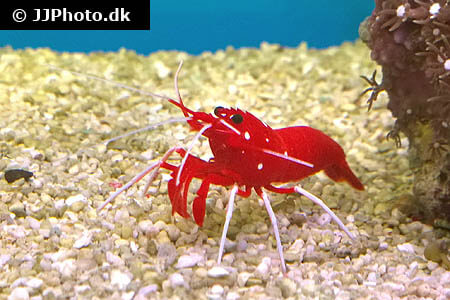 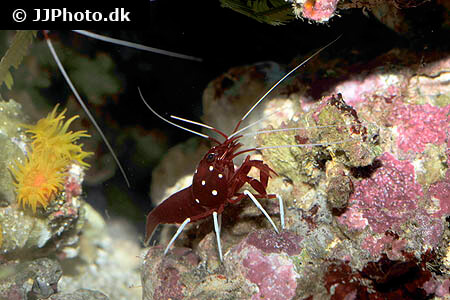 Care Level : Easy, take an hour or longer to acclimate and use a slow drip acclimation.

Temperament / Behavior : They may fight with other red fire shrimp and possibly other cleaner shrimps. Since this is a cleaner shrimp the fish should leave it be, but you never know with some of the larger triggerfish and lionfish.

Breeding : The fire shrimp has been bred in the home aquarium and for commercial enterprises. Also see: How to Raise and Train Peppermint Shrimp for a complete how-to on breeding saltwater shrimp.

Aquarium Size : 10 gallon (114 liters) minimum but preferably much larger to provide more stable water conditions. One shrimp per 30 gallons would be a good starting point.

Tank Mates : Don't keep them with larger fish that may eat them. Being cleaners, most fish somehow know not to eat them, but if a larger fish is hungry you don't know what they'll do.

Diet / Foods : They will eat most meaty type foods that get past the fish. They will come out an be more active when the lights are off looking for bits and pieces of food.

Tank Region : Stays near its cave or ledge in the live rock.

Gender : Hermaphrodites - has both male and female reproductive organs. 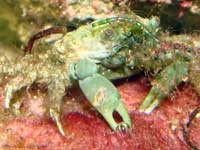