The Purple Firefish (Nemateleotris decora) is also known by various common names such as the Decorated Firefish and even the Fire Goby. The colors on this fish are simply amazing. Purple Firefish have a white or yellow body that fades to black towards a multi-colored caudal fin, and a purple face along with red/orange fins lined in streaks of black. 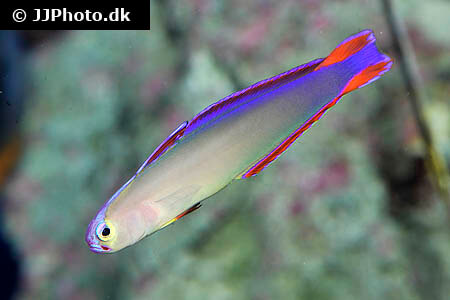 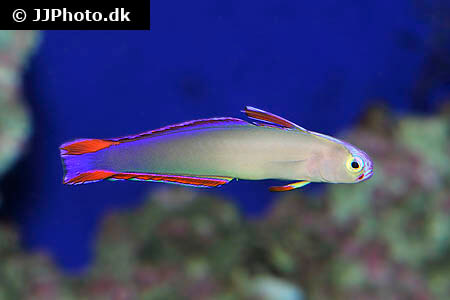 This fish likes to hover in the water column just outside it's hang out or over the sand substrate. While hovering they flick their dorsal and pectoral fins in unison, perhaps for stability. This firefish is considered a very good if not great beginner's fish because they are very hardy, should eat most fish foods offered, and should remain disease free if kept in optimal conditions. Just because they are listed as a "hardy" fish, doesn't mean that they can't or won't come down with a disease. Quarantine ALL new arrivals!

The Purple Firefish only gets to be about 3.5 to 4 inches when fully grown and can be kept in saltwater nano tank setups as small as 10 gallons.

Obviously, with a small tank you need to be extra diligent with your water quality. Behavior wise, they should do well with most species of similar size and temperament. If you're planning on keeping them in multiples, you may have issues. Some say it can be done (in very large setups) others say you should only keep one per tank. According to Scott Michael, "they (N. decora) are the most aggressive of the firefishes, it should be housed singly or in male-female pairs". Determining gender is very difficult if at all possible. Be on the safe side and only stock one per tank. Also, given their size, you don't want to keep them in tanks with Triggers, Lionfish, etc. 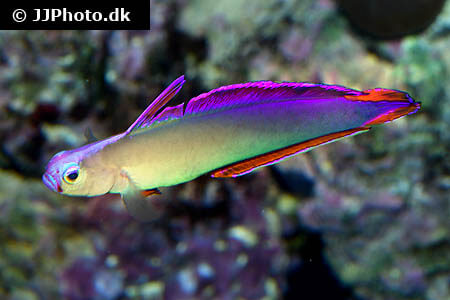 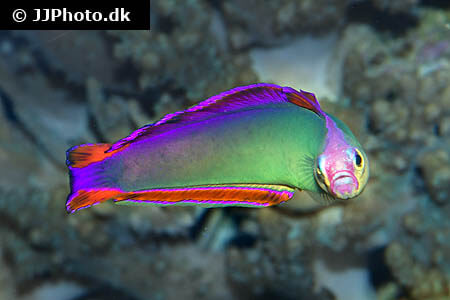 You should also know that they are accomplished tank jumpers. Having an open top tank may not work out for you with this species. A fitted aquarium hood with limited escape points is a necessity. Live rock or other suitable items that can provide shelter for the Purple Firefish are also needed. These hiding places may help them acclimate quicker and lessen the chances of tank jumping.

Feeding them shouldn't be much of a problem. This firefish should accept fresh or frozen (thawed) marine fish foods, live foods (brine shrimp, mysids) and even flake foods. If you're having difficulty getting them to eat, check your water parameters and try a variety of foods until they start eating. You may notice a behavior that looks like they are biting at the water. This is how they eat, picking at swimming zooplankton in the water column. 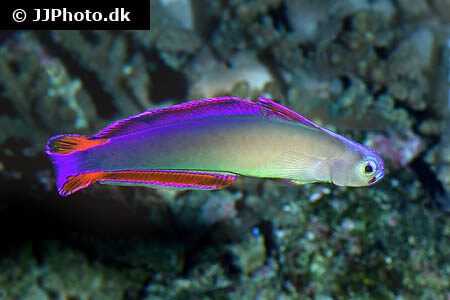 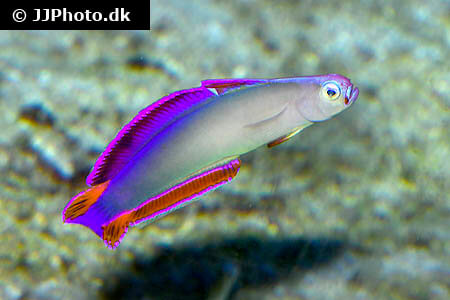 Temperament / Behavior : This is considered a good nano reef tank fish. They should leave most other animals alone, except if you're keeping multiples of this dartfish. Actually, it can depend on who you talk to. Some say you can keep multiples with no problems in sufficiently large tanks, others disagree. We have kept ours one to a tank. Fishbase has them listed as being found in pairs occasionally in the wild.

Breeding : Very difficult to breed in the home aquarium because the young are thought to go through a planktonic stage. Paired off couples will build a nest and may take turns guarding this nest.

Aquarium Size : 10 gallon (38 liters) minimum, since they are not the most active fish. They do need hiding places, caves, some sort of shelter to help make them feel secure.

Tank Mates : Use caution if you plan on keeping multiple dartfishes, especially multiple N. decoras in the same tank. Should do well with invertebrates, corals, etc. Obviously you'd want to avoid keeping them with larger saltwater fish, such as Lionfish, Triggers, etc.

Reef Tank Compatible? : Yes, they are good fish for a reef tank setup.

Fish Disease : Saltwater Fish Disease - Diagnose, Symptoms and Treatment - they are one of the better species for beginners because of their hardiness and for those that are just starting out.

Diet / Foods : Believed to feed on copepods and zooplankton in the ocean, but should do well with frozen marine preparations, flake fish food, brine shrimp, etc. Try a variety of foods to keep your fish active, healthy and vibrant.

Tank Region : Often found near it's preferred territory in the tank, near overhangs and caves in the lower half of the tank.

Gender : To our knowledge, there is not a way to determine external differences between male and females of this fish species.

Lythrypnus dalli
Catalina Goby
A cooler water goby that can be territorial with members of the same species. This fish won't live out its normal lifespan in a higher temp reef tank. 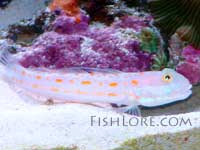 Valenciennea puellaris
Diamond Goby
Diamond Goby Excellent sand sifter that is also quite hardy. Needs a live sand bed and will require supplemental feedings which shouldn't pose a problem since they will go after typical aquarium foods.

Elacatinus oceanops
Neon Goby
A cleaner fish that may help keep the other fish free of external parasites, stays quite small, but not very long lived.