The Pink Skunk Clownfish gets their common name because they have pink bodies with a white, skunk like stripe running the top length of their body from mouth to tail. 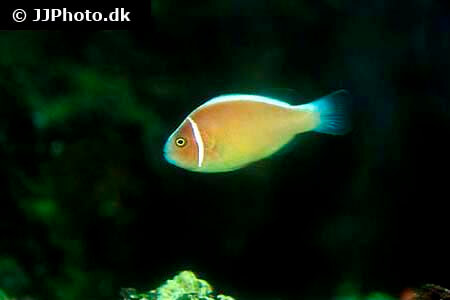 As adults they get to about 4 inches (10 cm) in size and will do fine in aquariums 30 gallons or larger. The pink clownfish doesn't really require all that much swimming room, especially if they have an anemone present. In the wild, they use the sea anemone for protection from predators. They are not quite as aggressive as some of the other clownfish species and may even get bullied by some species such as damselfish. Also, they do not need an anemone present in order to survive. They will do just fine without an anemone in your aquarium.

They can usually be purchased for $20 to $30 online if you can't find them locally. Look for tank raised or aquacultured specimens and help support the captive breeding programs in your area or online. When buying pink clownfish from your local saltwater fish store make sure they are eating and ask if they are captive raised. This is very important! Tank raised clownfish are often times more expensive but definitely worth the premium given that they will do much better acclimating to your tank than those pulled from the ocean. 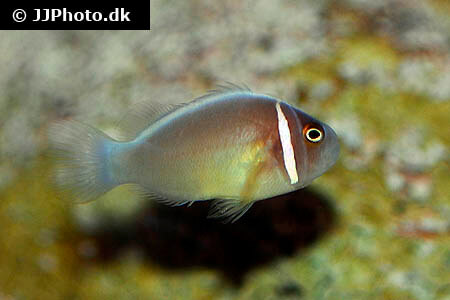 Overall, tank raised species are fairly hardy and will go after most fish foods placed in the tank. Feed them a good pellet based food (1 mm in size - NLS is great) and supplement with thawed saltwater fish foods as treats from time to time.

Like other clownfish they are considered easy to breed as far as saltwater fish species go. If you are interested in breeding them an excellent book is the Clownfishes Guide to Captive Care and Breeding.

Care Level : Easy to Moderate, can become territorial and aggressive.

Breeding : They are protandrous hermaphrodites, which means that they are born males but can change sex into a female. In many clownfish species the females are much larger, but with the pink skunk clownfish the differences in size between the male and female is not quite as big.

Tank Mates : They will do fine in tanks with other peaceful fish species. Avoid keeping them in tanks with fish large enough to eat them or fish that may harass them such as other clownfish species or damselfish.

Reef Tank Compatible? : They do just fine in reef tanks and will leave the corals, inverts and clams alone.

Fish Disease : Saltwater Fish Disease - Diagnose, Symptoms and Treatment. As with all new purchases, use a quarantine tank.

Diet / Foods : They are omnivores which means that they will go after both meaty and vegetable/algae based foods. A good quality pellet food (like NLS) can form the base of their diet and you can supplement with occasional feedings of thawed marine origin foods like mysis shrimp, brine shrimp, etc.

Tank Region : If an anemone is present and is hosting the clownfish they won't usually stray far from it. But without an anemone they can sometimes be more active and swim more often around the tank.

Gender : All are males when they are born. As they mature and start to pair off the dominant one will change into a female. The female is usually larger than the male and will be the primary defender of their territory. Once a paired is formed they will place the eggs on a hard surface like the live rock or a piece of tile and then tend to the eggs until hatched. The fry need to be feed very small foods multiple times per day and be provided with excellent water quality if you plan on raising them into the juvenile stage. Check out the Clownfish breeding book by Joyce Wilkerson linked below.

The magnificent sea anemone (Heteractis magniica) is their primary host 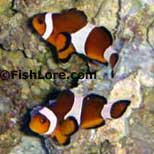 Amphiprion ocellaris
Ocellaris Clownfish
This has to be the most popular saltwater species out there and rightly so. They are fairly hardy once acclimated and quarantined. Clownfish are one of the easier saltwater species to breed and they are being aquacultured. Buy aquacultured species over wild caught whenever you can to help support marine fish breeding programs. 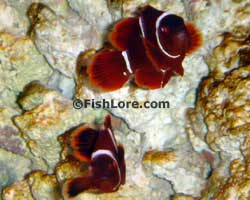 Premnas biaculeatus
Maroon Clownfish
Comes in maroon colors with either white or gold stripes. The gold striped maroon clowns are usually more expensive. This clownfish can get aggressive as it matures.