The Peppermint Shrimp (Lysmata wurdemanni) is a smaller saltwater invertebrate, reaching about 2 inches (5 cm) in size as adults. Peppermint Shrimp have transparent bodies with red stripes all over. This shrimp is fairly common and can be bought for anywhere from $5 to $10 dollars. It is sometimes called the Candy Cane shrimp or the Caribbean Cleaner Shrimp but the name Peppermint Shrimp seems to be the most common. 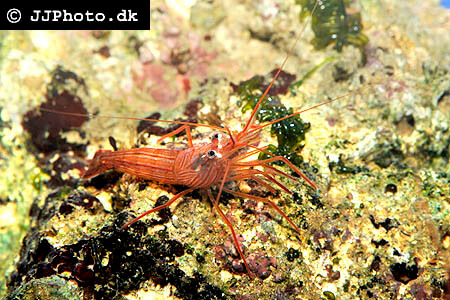 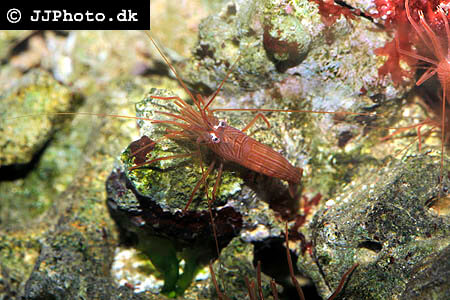 The peppermint shrimp is supposed to eat aiptasia (glass anemones). Aiptasia is considered to be a pest in the saltwater aquarium because it will reproduce rather quickly in tanks with high nutrient loads and because it can sting corals and fish.

There are a few different ways to control this anemone and using this shrimp is a popular choice for many aquarists. The problem though, as some have stated, is that they may only go after the smaller aiptasia anemones and leave any larger aiptasia alone. Some hobbyists have also complained that their peppermints will not touch the aiptasia at all. Perhaps its because they don't have the Lysmata wurdemanni? There is another shrimp similarly named with the scientific name Lysmata rathbunae and it may not eat aiptasia. L. wurdemanni and L. rathbunae can be very difficult to tell apart. We never witnessed them actually eating the aiptasia in our tanks but these pest anemones quickly vanished, one by one, over a several day time period. There were two aiptasias that had to be at least 1 inch in diameter but these are now with the big anemone in the sky thanks to these shrimps.

The Peppermint Shrimp is a fairly easy going shrimp that should play well with others of its own species but it may fight with other shrimp species in the aquarium. Reef tank keepers have reported mixed results when keeping them in their reef tanks. Some say that they nip at soft corals and others claim that they've never witnessed this behavior. So it is not considered completely reef tank safe. They can be extremely shy at times, seldom venturing out from behind the rock scaping for days at a time.

Like other shrimps, this shrimp needs an iodine supplement periodically added to the tank water to help them shed their exoskeleton in a process known as molting. They can be very vulnerable during a molt and will usually stay hidden in the live rock until this process is complete. Only dose iodine if you have an iodine test kit! You can easily overdose and you may get bad side effects such as excessive brown algae growth.

Feeding this shrimp should not be a problem since they should scavenge the tank for any uneaten foods and detritus. You may want to give them a sinking shrimp pellet or a small piece of fresh fish from time to time. Some folks claim that they will eat hair algae, though we've never witnessed this ourselves.

Temperament / Behavior : This is a fairly peaceful shrimp that might make a nice addition to a peaceful tank. They may not be considered reef tank safe because they sometimes pick at and steal food from your corals.

Breeding : This hermaphroditic shrimp species is successfully being aquacultured and raised commercially. Also see: How to Raise and Train Peppermint Shrimp for a complete how-to on breeding saltwater shrimp.

Tank Mates : They may scrap with other invertebrates in the same tank but they may do fine with other peppermints. Obviously, you don't want to keep them with much larger fish species that could eat them. Not considered as efficient as the skunk cleaner shrimp when it comes to cleaning fish.

Diet / Foods : This shrimp is an aiptasia eater and will also scavenge around the tank looking for bits and pieces. Make sure they are getting enough to eat. Give them a sinking shrimp pellet or sinking tiny pieces of fresh fish.

Tank Region : Tends to hang out on the live rock in the tank and seldom ventures far from it's chosen territory in the aquarium. You may be able to get them out of hiding once food hits the water. 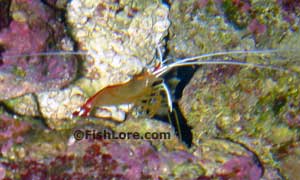 Lysmata amboinensis
Skunk Cleaner Shrimp
This is one of the best of the shrimp cleaners. Check out the profile page for pictures of this species in action cleaning a Yellow Tang. They are pretty hardy too and can be kept in groups or pairs.

Turbo fluctuosa
Turbo Snail
A great snail for cleaning algae from the rock work and tank glass. One per 20 gallons are so should be fine. 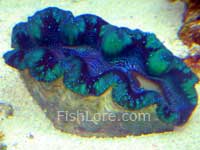 Tridacna crocea
Crocea Clam
This saltwater clam comes in a variety of colors and needs high output lighting provided by either metal halides or T5's. 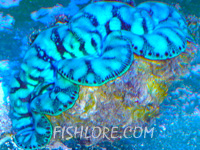 Tridacna maxima
Maxima Clam
They get most of their energy needs from the zooxanthellae living within the mantle and need high intensity lighting over the tank. Metal halide and T5's are recommended to keep these clams.