The Pearl Gourami has many different common names such as the Lace Gourami, the Leeri Gourami, etc. They are all referring to the same fish - Trichopodus leerii. 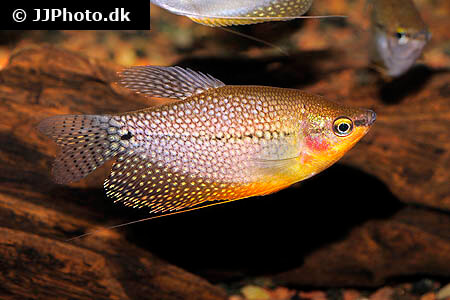 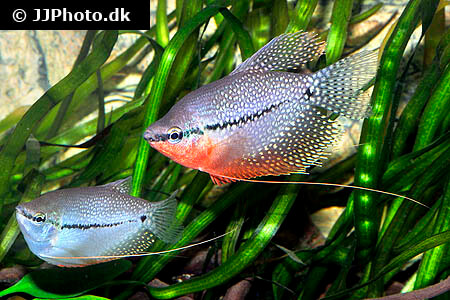 For a gourami, the Pearl Gourami is considered peaceful and will share a tank with most community fish types. However, male pearls may fight with each other, especially if there are females in the tank and it's spawning time. Be ready to use a tank divider or take the other males back to the store and only keep one male with the females in your tank. Even after doing this, the male may still harass the other female pearl gouramis. Take the appropriate action if this happens.

The originate from swampy areas in Asia where the water can be on the acidic side of the pH scale. While it would be good to keep them in similar conditions you should know that they will tolerate a wide range of water parameters.

They are a very nice looking fish with tons of tiny white "pearl" shapes dotting its body. There is a horizontal black bar that runs the length of the Pearl Gourami's body. Males are easy to distinguish from females because they will develop a red breast and their dorsal fins will be longer. 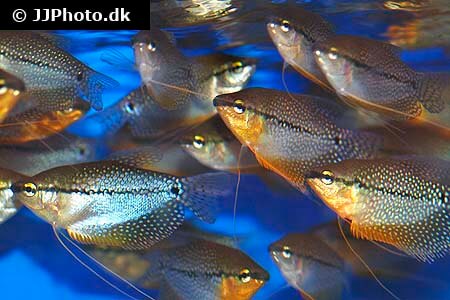 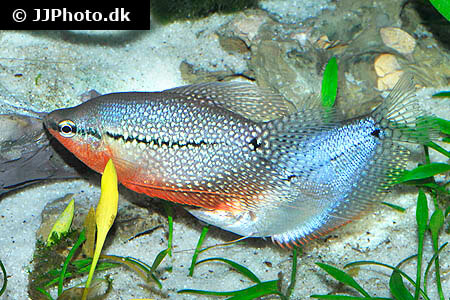 Feeding your gourami should pose no problems since they will eat nearly every sort of fish food you put in the tank. Give them a quality flake food and supplement with live or frozen freshwater fish cubes. Feeding live foods becomes even more important if you're planning on breeding this beauty. If you've successfully bred livebearers you should find that this fish is not that much harder to breed assuming that you can acquire a male and female. Females seem to not be as commonly available at the fish store as the males. 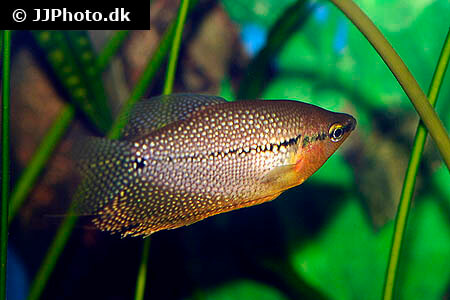 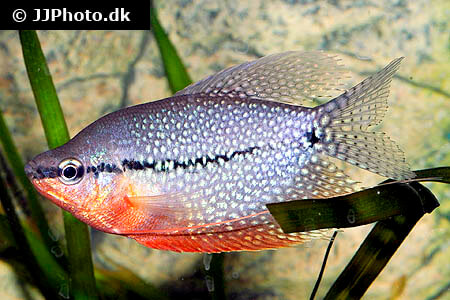 Temperament / Behavior : Mostly peaceful but they may scrap with other gouramis. Males seem to be more aggressive than females.

Breeding : The Pearl Gourami is a bubble nest builder. Increase the tank water to around 82°F (28°C), lower the water level a little and condition them with good foods (live foods and/or brine shrimp) for a couple of weeks. The male will build a bubble nest and then he will try to get the female to come over to his nest where he will wrap himself around her and she will release the fertilized eggs into the nest. He will then guard the nest. The eggs should hatch within a day or two and the fry should be swimming about 5 days later. Make sure you have fry foods ready - liquid fry food works well. You will want to move them to a grow out tank where you can perform frequent (daily) partial water changes.

Tank Mates : Peaceful most of the time, except for when the male pearls go after each other. Watch for signs of aggression and remove or separate as needed. They may also bicker with other gouramis.

Diet / Foods : This is not a picky fish. They will eat flakes just as quickly as they'll eat live and frozen foods.

Gender : Relatively easy to determine. The male will develop a red breast and the male's dorsal fin is longer. The red breast on the males should become even more visible as it nears spawning mode.


Still have questions?
Jump on the forum and ask your question!
Go here: Pearl Gourami Forum