The Maroon Clownfish (Premnas biaculeatus) has a maroon body with 3 vertical yellow stripes outlined in white on its body. There is also a gold stripe variety that comes from Sumatra and the gold stripe is usually a little more expensive. 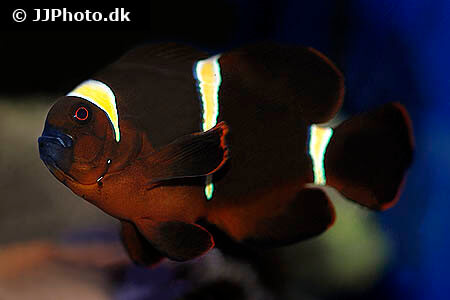 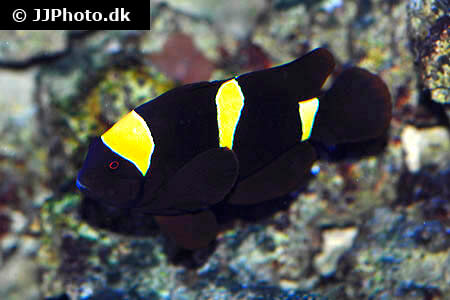 This fish may be one of the most aggressive of the clownfishes. They will not get along well with any other clownfish in the same tank unless they are a mated pair. Even hobbyists keeping them in very large aquariums have reported aggression amongst the maroon clown fish and the other clowns in their tank. They do have the same characteristic swimming style as other clowns and are really interesting to watch.

The Maroon Clownfish is reportedly one of the easier marine fish to breed and they have been successfully breeding in home tanks even without a host anemone present. This is good to know because their host anemone, the bubble tip anemone (E. quadricolor), requires intense aquarium lighting (T5's, LED's or metal halides) to be kept alive for prolonged periods of time. Maroon clowns range in price anywhere from $15 - $50 USD. 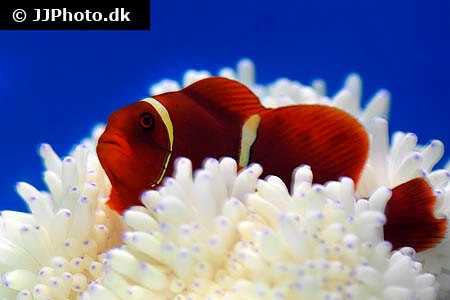 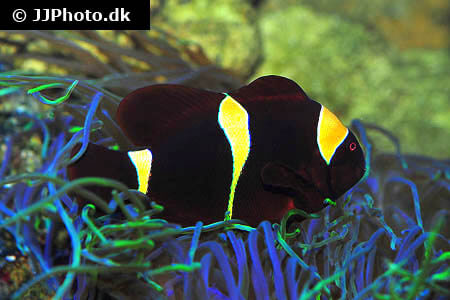 Getting them to eat standard aquarium fish foods shouldn't pose a problem because they are fairly good eaters. In the wild they eat zooplankton and sometimes algae. Give them a nice variety of marine fish foods such as vitamin enriched flakes, frozen marine preparations and every once in a while, live foods.

Unfortunately, Maroon Clownfish are not all that saltwater fish disease resistant and you will need to use a quarantine tank before introducing them into your main tank. Keep them in the qt tank for two weeks or so and watch for obvious saltwater diseases, like marine ich. Be especially careful with any medications you use with this fish. They will not tolerate high levels of copper based medications! 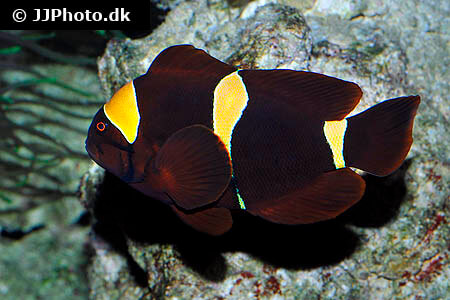 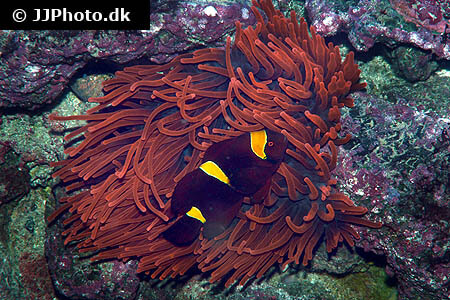 We have a maroon clown fish pair that hosts with a bubble tip anemone. At feeding time, they will bring back food (usually flake fish food) to the anemone. If you have shrimp, such as the cleaner shrimp, be advised that these shrimp are good at taking food from the anemone. The clownfish would bring the food to the anemone and then the shrimp would scamper up into the anemone and remove the food! When this happens we drop in a few more flakes for the clowns to give to their host anemone. It's very cool to watch the clownfish feeding their anemone. 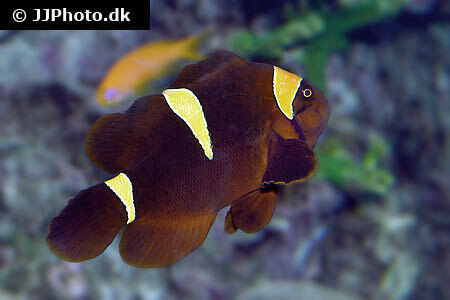 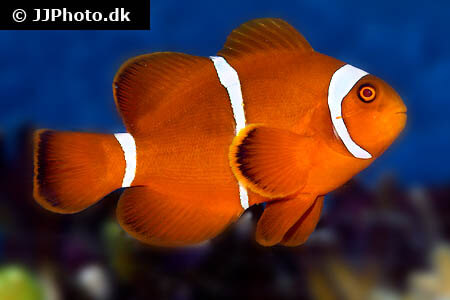 Temperament / Behavior : They may be aggressive with other Clownfishes in most tank setups and might bully smaller tank mates. They will defend their host anemone (if included in tank) aggressively.

Breeding : This fish has been successfully bred in captivity with many tank raised specimens being offered for sale. Once paired off, the pair will clean off a suitable spot (flat rock) and then place the eggs in this location and defend the area aggressively. There was a study done that showed that larval fish fed plankton enriched with algae had better survival rates.

Tank Mates : Use caution when selecting tank mates. It's probably not wise to keep them with Lionfish or Triggers large enough to eat them. Also avoid keeping them with smaller more peaceful tank mates because the maroon clowns may bully them.

Diet / Foods : Maroon Clownfish primarily feed on zooplankton in the ocean but they generally are not very picky when it comes to food. Try to give them a variety of marine preparations. They should accept vitamin enriched flake foods, frozen and definitely live foods.

Gender : Males are generally smaller, more red and less aggressive than the female. This fish has the ability to change it's gender when the top female dies. A larger male will turn into a female.

Amphiprion perideraion
Pink Skunk Clownfish
They are about 4 inches (10 cm) in size as adults and do well in aquariums 30 gallons or larger.

Amphiprion frenatus
Tomato Clownfish
Getting to about 5 inches (13 cm) as adults these clowns are really hardy and are good choices for first time clownfish keepers.