The Magnificent Foxface Rabbitfish doesn't seem to be as common as some of the other rabbitfish species but it is just as hardy.

The Magnificent Foxface Rabbitfish can tolerate a varying range of water parameters and may be a good saltwater beginner fish. They do have venomous dorsal spines so you'll need to use caution when using a net to catch them. Rabbitfish can easily get tangled in the net and if that happens gently move the net back and forth in the tank until they relax their fins. Better yet, chase them into a plastic container with the net. Then you don't have to worry about getting them caught in the net. 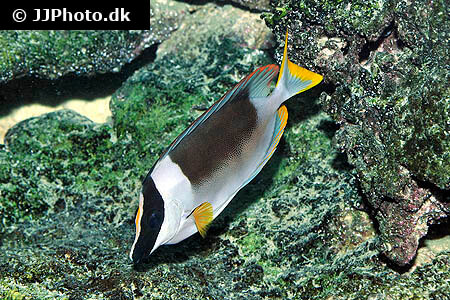 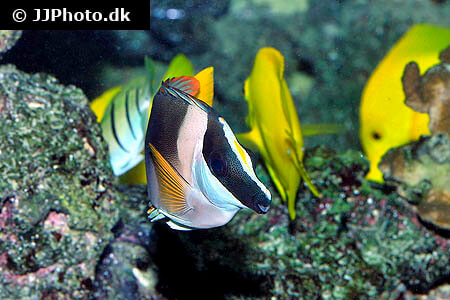 In the wild these Magnificent Foxface Rabbitfish are often found swimming in pairs but it is not advisable to keep multiple rabbit fish in the home aquarium. Other than other rabbitfish, they should get along with most other fish species, even the more aggressive ones. The more aggressive fish should respect those venomous spines. 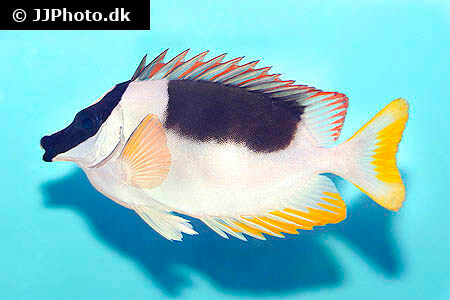 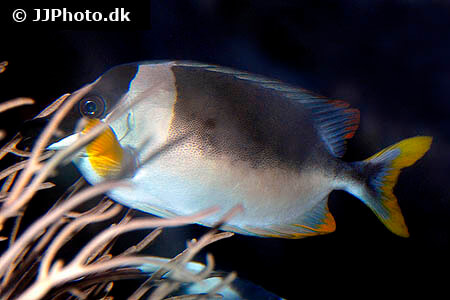 They primarily eat algae (e.g. nori) and having lots of live rock in your aquarium will help make them comfortable, provide them with grazing opportunities and hiding places. Magnificent Foxfaces are not very picky when it comes to fish food and should accept most foods that you give them. Try to give them a varied diet of live, frozen, freeze-dried and vitamin-enriched flake foods. Use a veggie clip with marine seaweed every other day or so. Many believe that this fish is reef tank safe, but if you don't keep it fed it may nip at corals and invertebrates.

They appear to be resistant to most saltwater fish disease but it's wise to be careful and use a quarantine tank before introducing them into your main tank. After they've been in quarantine for two weeks or so and you notice no signs of illness and they are eating well, you can acclimate them into your display tank. 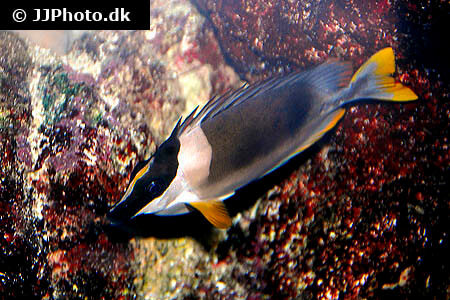 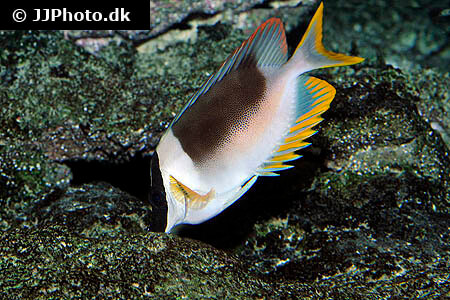 Rabbitfish Care Level : Easy, can be recommended as a saltwater beginner fish for someone with a large enough aquarium.

Temperament / Behavior : Magnificent Foxface Rabbitfish are often found in pairs in the wild but will probably not tolerate other rabbit fish in most tanks unless they are mated pairs and the tank is really large. Should play nicely with most other fish but may nip at crustaceans and other invertebrates. More aggressive tank mates should respect them because of their venomous dorsal spines and so should the hobbyist.

Breeding : Not sure, but they may have been bred in captivity by aquaculture farms.

Tank Mates : Probably best to keep only one rabbit fish to a tank unless it is really large (150 gallons or more). Can handle themselves around more aggressive tank mates. Use caution if you're planning on keeping them in a reef tank

Reef Tank Compatible? : Rabbitfish will do fine in a reef tank and like the tangs, they may help control some forms of algae when grazing on the live rock in between meals.

Diet / Foods : Give them a variety of marine foods but mostly marine algae type foods. They should accept vitamin enriched flake foods, frozen and live foods. They may sample some corals.

Gender : Females are usually larger than males of the same age.