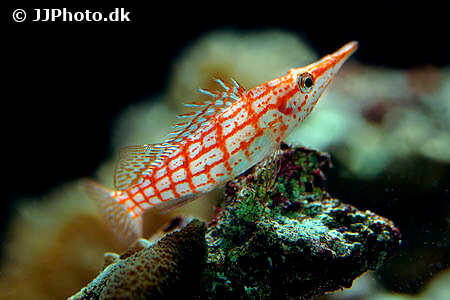 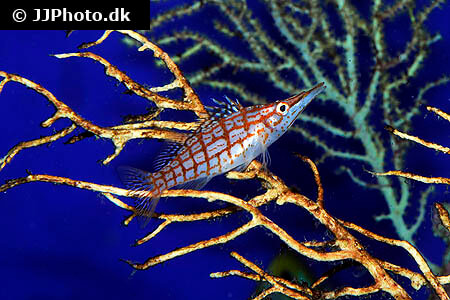 This Hawkfish can usually be bought for $30 to $50 online and they stay relatively small, reaching a potential adult size of around 5 inches. The Longnose Hawkfish is kept in aquariums 30 gallons or larger and in singles. Keeping multiple hawkfish in most home sized aquariums is asking for trouble.

The Hawkfish needs a bit of live rock to perch itself upon and watch life go by. Sometimes something will catch their eye and then they pounce, only to retreat back to their perch. Avoid keeping them in tanks with small saltwater invertebrates because they can and will go after the inverts. Snails, Hermit Crabs and Sea stars are all fair game to the Hawkfish. 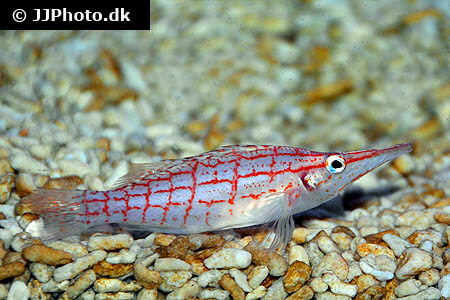 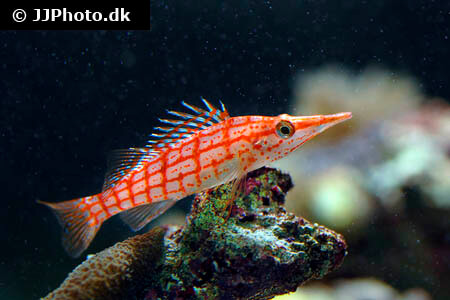 The Longnose is a known tank jumper so a good tight fitting hood or canopy will be needed.

It's interesting to note that all of these hawkfish are females at first and then one will change into a functional male when needed. They are harem spawners in the wild and are considered pelagic spawners. Although in the home aquarium it was reported that they are nesters/guarders. They difficult part is getting them to pair, spawn and raise the larvae past metamorphosis. 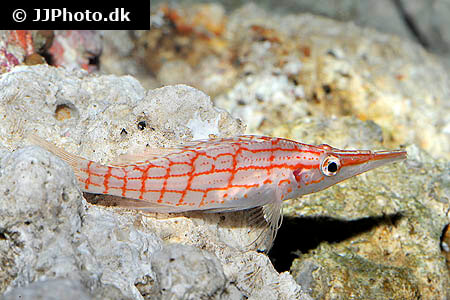 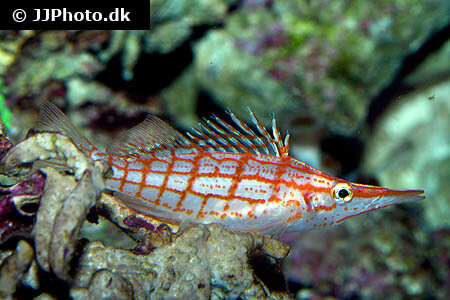 Temperament / Behavior : Might be considered reef safe if kept well fed. Remove it though if it shows signs of going after any invertebrates such as shrimps or snails.

Breeding : Reportedly has spawned in the home aquarium but the larvae have not survived for long. Male hawkfish may be slightly larger with black markings on their dorsal fins.

Tank Mates : Use caution when selecting tank mates. You may have better results if this is the last fish placed in the tank. You may still see some aggression with other fish that are the same size or smaller. These fish are not necessarily reef aquarium safe because they will nip lps corals and may pick on smaller invertebrates.

Reef Tank Compatible? : Not necessarily, see above and use caution if you have clams since it has been reported that they may nip at them.

Diet / Foods : Small frequent carnivore type foods a couple times per day. Rod's foods or thawed shrimp such as brine or mysis work well. Give them a thawed clam on the half shell from your local supermarket. Simply rinse the clam under room temperature water until the shell opens up and then give the meaty side to your fish. The clam meat is usually gone by the time the shell hits the bottom of the tank!

Gender : Males may be slightly large than females with black markings on their dorsal fins.