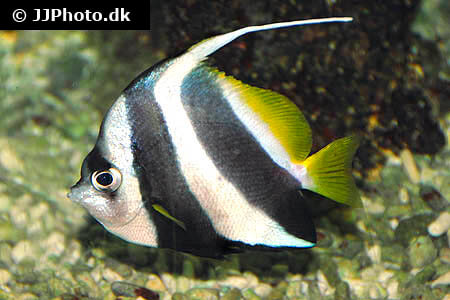 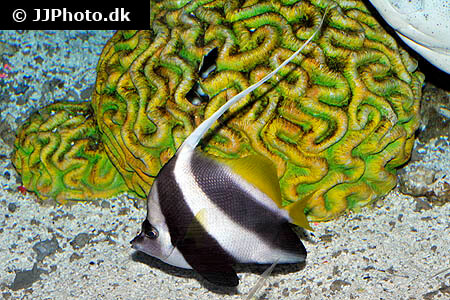 The Longfin Bannerfish is also known as the "Poor Man's Moorish Idol" since it sort of resembles the Moorish Idol but the bannerfish is better suited to aquarium life. They are striped white and black with yellow dorsal and caudal fins along with the signature long white banner fin that can extend out past the caudal fin (tail fin). The body shape of this fish reminds us a little of the freshwater angelfish. 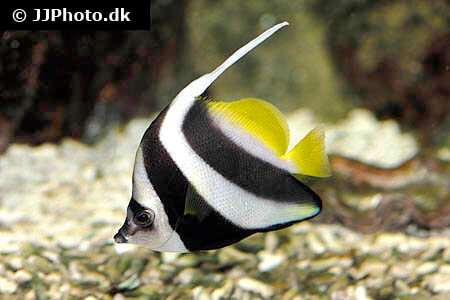 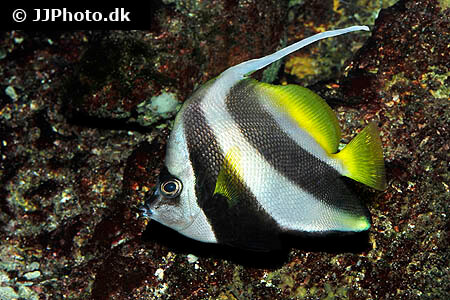 It is possible to keep multiple Longfin Bannerfish in the same tank. In the ocean they form small schools and pairs. They do need a larger tank when keeping multiples given their adult size and their need for adequate swimming space. They are quite passive and rarely bother tank mates. They may get bullied by larger fish species such as tangs and triggerfish.

Assuming that you've picked out a good specimen with no visible signs of illness or disease, Longfin Bannerfish should easily acclimate to your tank. They are not at all picky (usually) about the foods they are given and should eat most fish foods presented to them. Get and use a good flake food and supplement with fresh and frozen foods. If you do get one that is finicky, try the frozen brine shrimp cubes (thawed first) and slowly get them on flakes. The live rock in your tank can provide places of shelter and can also be a food source that they may pick at in between meals.

It is reported that H. acuminatus should not be considered reef safe whereas the H. diphreutes is reef tank safe (S. Michael 2001). 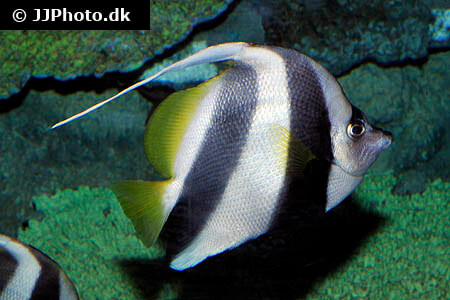 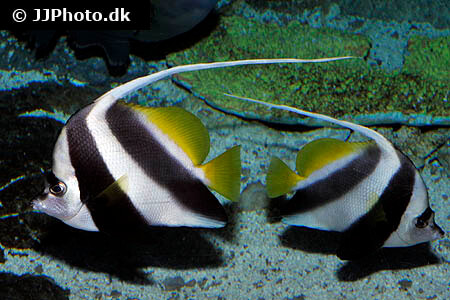 Origin / Habitat : Indo-Pacific, North and South Japan, Micronesia, sticks close to the reef slope and often seen in lagoons. They have even been found in the Atlantic Ocean.

Temperament / Behavior : This bannerfish is very peaceful with other fish species, but may pick at reef invertebrates.

Breeding : Very difficult to breed in captivity. They do form pairs.

Aquarium Size : 100 gallon (379 liters) minimum given that they like to school and need lots of swimming room.

Tank Mates : Since this species is fairly passive, you'll want to stock them similar minded fish species. You may have issues if you plan on keeping them with other butterfly fish and they should be kept out of saltwater reef tanks. May nip at soft corals and smaller invertebrates. May get bullied by tangs.

Diet / Foods : Longfin Bannerfish mostly eat zooplankton in the ocean, but will and should go after most foods offered. Try to feed them a varied diet of fresh meaty foods, frozen foods (thawed first) and a good quality and balanced flake food. They may also pick at algae growing on tank surfaces and live rock.

Tank Region : All over, but usually the middle to the top regions of the aquarium.

Gender : No externally distinguishing characteristics to determine the differences between males and females.