The Lawnmower Blenny (Salarias fasciatus), also known as the Jewelled Blenny or Rock Skipper, is a saltwater utility fish that is used as part of a clean up crew to keep hair algae at a minimum. 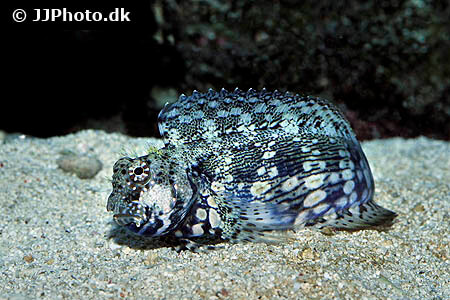 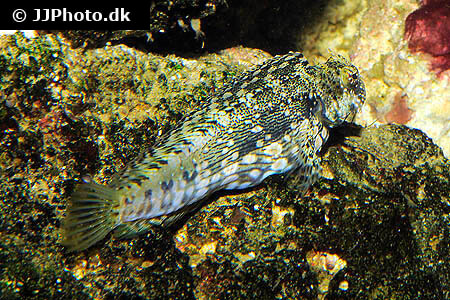 In our opinion, using the Lawnmower Blenny as a means of controlling algae should only be considered as a short-term fix to a bigger issue. Accumulating nutrients that feed the algae growth need to be diluted through better aquarium husbandry.

They will hop from rock to rock rasping at the algae growth and they do a great job on "hair algae". However, once this algae is reduced supplemental feeding may become necessary to prevent starvation. You can put dried marine algae (nori) in the tank to feed them once all the hair algae is gone.

The Lawnmower Blenny can usually be purchased locally or online anywhere from $10 to $20 US dollars. They do ship well but buying one sight unseen can be risky. Use a local supplier as your first option. 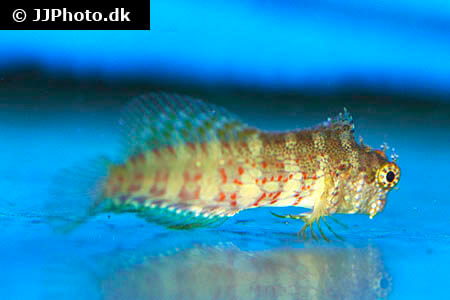 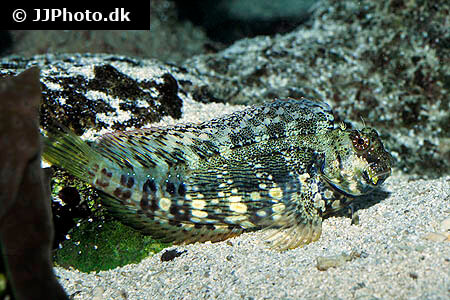 This blenny is quite endearing and has a very curious personality. They may remind you of an iguana or similar lizard the way they look at you with those orbital eyes. A healthy and well adapted specimen will be very aware of it's surroundings and observant of other fish and the aquarium keeper. If you walk by the tank while they are eating, they will stop and take notice of you for a bit and then continue on with what they were doing. Very cool little fish.

Use caution if you plan on keeping one of these lawnmower blennies in a reef tank setup. They have been reported to become more aggressive as they grow and will not tolerate same or similar species in smaller tanks. Obviously, you don't want to keep them with much larger species either that may view them as food (Lionfish, Triggerfish, etc.). Nipping at coral polyps and clam mantles is sometimes reported, so again, use caution if you have a reef tank and be prepared to remove them if this becomes a problem. Since the Lawnmower Blenny likes to stay around the live rock, removing them can be quite difficult. A fish trap may be necessary in this case. Author Scott Michael advises not to keep these Jewelled Blennies with seahorses and pipefishes "which it will harass". 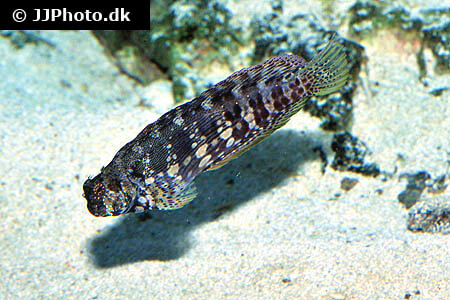 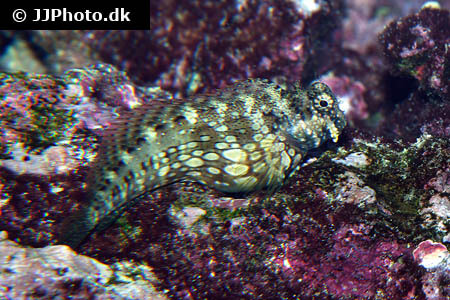 Temperament / Behavior : These blennies can be quite peaceful with most tank mates, but may get belligerent with similar looking species or it's own species. They may get more aggressive with other tank mates as they mature.

Breeding : This fish is an egg layers - they lay eggs that are sticky and attached to the substrate. Can be difficult since they might be aggressive with their own species unless they are a mated pair. Getting the pair is the hard part.

Tank Mates : As mentioned previously, one to a tank is advised unless you have a mated pair or a sufficiently large enough aquarium with lots of algae for them to eat.

Reef Tank Compatible? : Not really considered reef tank safe. They have been known to nip at corals and clam mantles.

Fish Disease : Saltwater Fish Disease - Diagnose, Symptoms and Treatment - although this blenny is very hardy, they can still succumb to the usual fish diseases if you don't practice proper quarantine procedures.

Diet / Foods : You need lots of live rock with algae growth to sustain your Lawnmower Blenny long-term. They primarily feed on algae. You can try to supplement with dried algae sheets (nori) using a veggie clip or placed under some live rock in the tank for them to eat. Make sure they are getting enough to eat or trade them with someone that does.

Tank Region : Usually on, in or around the live rock or sand substrate. They are known as rock skippers because of the way they kind of hop from rock to rock on the reef.

Gender : Hard to determine differences between male and female. 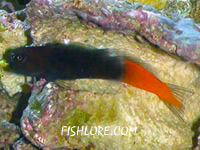 Ecsenius bicolor
Bicolor Blenny
The Bicolor Blenny is considered hardy but you still need to do a drip acclimation of about an hour or so, depending on the differences in source and tank water. Don't introduce them to new tanks without sufficient micro algae growth for them to graze on in between meals.

Ecsenius bicolor
Midas Blenny
This blenny gets to around 5 inches and needs at least a 30 gallon tank or larger. May fight with other blennies.