The Mystery Snail is part of the Apple Snail family in which there are over 100 different documented species. Unlike some other snails, the Mystery Snail stays relatively small and should leave your aquarium plants alone (for the most part). They do like to graze on the tank glass and any other structures in your aquarium looking for algae. If you have a sand tank bottom, they may submerge during the day and come out at night. They are fairly easy to care for but there are a few things to keep in mind when it comes to caring for this snail. 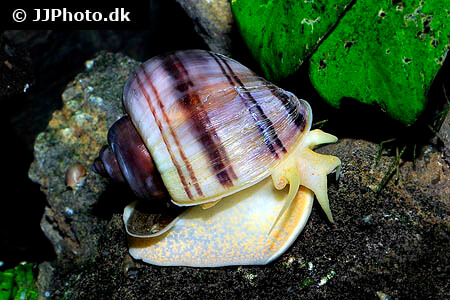 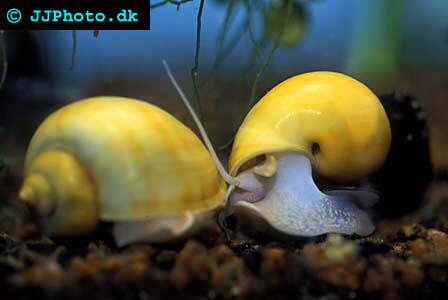 They primarily scavenge on bio-film and algae so they will need a lot of greens in their diet. They may also go after meaty type items at times too. If your tank doesn't have alot of algae, give your snail some algae wafers or attach a piece of lettuce to a rock. This should provide plenty of nourishment for your snails. There was a study done showing the growth rates of these snails when fed various diets and juvenile growth rates were much better when fed crushed fish flakes and green peas. So like fish, they could do with some variety as well perhaps. Interesting: Pomacea bridgesii aquaculture potential.

Avoid keeping Mystery Snails with fish that are known snail eaters like the fish from the loach family. Goldfish have also been known to nibble at them ocassionally. Some fish will even nip at the snail's tentacles, sometimes nipping off most of it. This doesn't seem to bother the snail and often times it will grow back. 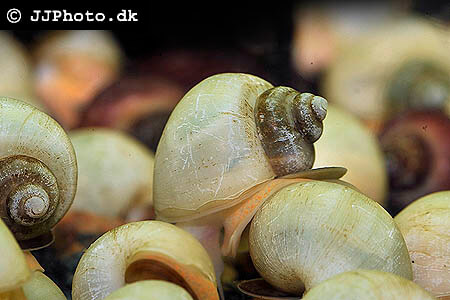 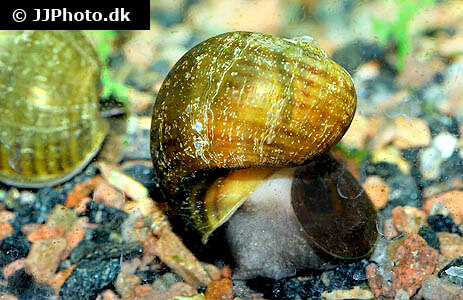 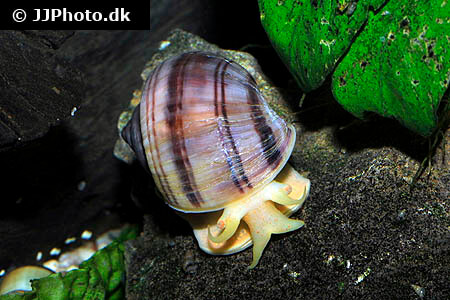 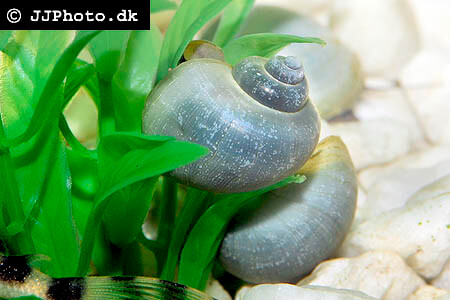 Breeding : They lay their eggs above the water line, so some open humid space should be left in the top part of the tank for them to access for attaching their eggs. If the eggs make it, in a couple of weeks you should have tiny snails. You can try to feed them crushed flake foods (separate them from the main tank) or let them graze on any growing algae already in the tank.

Tank Mates : Avoid keeping them with known snail eaters, such as the Clown Loach and the Dojo Loach

Disease : Most issues are related to irregular shell growths due to improper or poor water quality. Missing tentacles are usually the result of a fish sampling them. The tentacles may or may not grow back depending on the situation. If the snail is isolated from fish and kept in good water conditions it may grow back. Also consider adding a calcium supplement for their shell. This supplement can be found in the saltwater fish section at the fish store.

Foods : An opportunistic grazer they will eat bio-film, crushed flake foods, peas as well as other veggies. They may also sample your aquarium plants. Drop them in an algae wafer when the lights go off for the night.

Tank Region : If you have a sand substrate, they may burrow in the sand. Most of the time they can be found attached to a structure or tank wall grazing on algae.

Gender : Very difficult to determine any external differences between male and female. Females may grow to be slightly larger.

Cambaridae Camburus
Crayfish, Crawdad
Although it is a very cool invert to keep, it is not suitable for community tank setups. 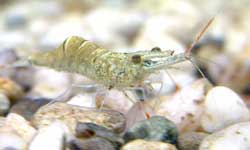