The Harlequin Tuskfish (Choerodon fasciatus) is an interesting wrasse that is usually shipped out of the Philippines or Australia.

If you can (and if they know) ask your pet store where they get their Harlequin Tuskfish from. If they say the Philippines you may want to take a pass on it. If they say Australia you may be good to go but make sure you watch them eat something first. The harlequins coming from the Philippines are caught using questionable practices whereas in Australia the fish have a better shipping and survival record. If all that checks out, assuming you can afford the price tag and you have a big enough saltwater aquarium with the appropriate tank mates you may find yourself owning a Harlequin Tuskfish. 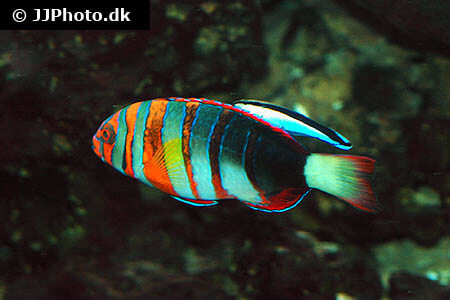 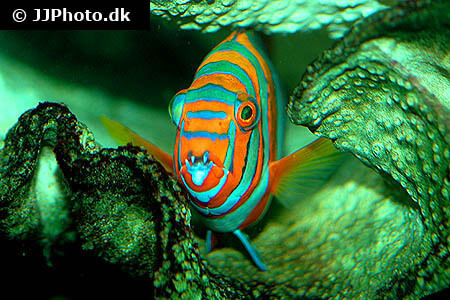 Their blue tusks (teeth), beautiful colors and markings can be hard to resist. You will pay a premium price for those coming out of Australia but it's most likely worth it because they will live longer than a couple of weeks and they are supposed to be more colorful.

Although they can be shy when small and first acclimated to a tank, they usually come around and will be out and about. You may have problems introducing them into a tank with larger angelfish or triggers if they were in the tank first. The larger species may bully a smaller tuskfish. Make sure they are getting enough to eat and they should come around.

Speaking of fish food, the Harlequin Tuskfish is mostly carnivorous but does go after most foods presented to them. Try to give them a healthy, fresh and balanced diet. Fresh fish, shrimp and clams from the market cut up into appropriately sized pieces works well. Try to mix in some sea veggies (nori) too to get some ruffage into their diet.

Reef tank keepers may not be interested in this species due to the fact that they will go after smaller invertebrates such as shrimp and crabs. They may have a harder time getting at the snails. Corals and clam mantles are usually not bothered. 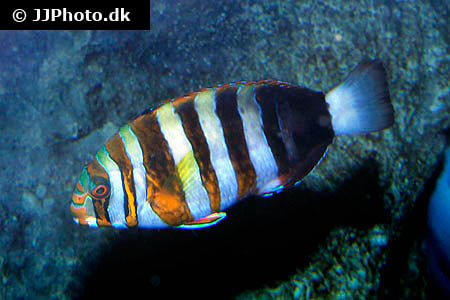 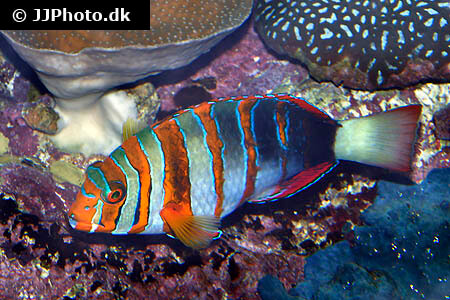 Even though the Harlequin Tuskfish coming from Australia are reported by hobbyists to be quite disease resistant (avoid the Philippines Tuskfish) it would still be wise to do a freshwater dip and/or quarantine for several weeks before putting them into an established aquarium.

This is a really cool fish that could be the show piece in a larger saltwater tank setup with the right tank mates. Provide them a large tank with caves using the live rock, good water quality, fresh foods and they should be happy campers. 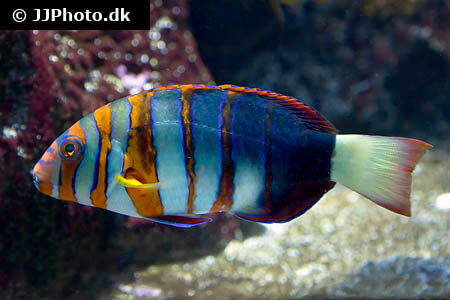 Origin / Habitat : Reefs of the Western Pacific, Indonesia, the Philippines and near Queensland, Australia. Also the Palau Islands

Temperament / Behavior : Does well with similar sized species but can be territorial with other tuskfish. May eat smaller fish and invertebrates as it gets larger. They are frequently quite shy when first acclimated to a tank. Give them some time to adjust and make sure they are eating and they should eventually be out and about.

Breeding : Not sure if this species has been propagated in captivity. They are open water egg scatterers.

Tank Mates : Don't mix them with other Harlequin Tuskfish. Keep only one to a tank and you should be ok. Snails might be ok, but shrimps and hermit crabs will probably be on the menu for these wrasses.

Reef Tank Compatible? : If you're not keeping shrimps or crabs they have a pretty good reputation for leaving corals and clams alone. You need a big reef tank though.

Diet / Foods : Mostly carnivorous, the Harlequin will do well with a varied diet in captivity. Occasional fresh meaty seafood fare from the market such as clams and small pieces of shrimp can be offered. Mix in some sea veggies to round out their diet along with a good quality and fresh flake food or pellet food. Most of the time these wrasses are easy to feed relative to other saltwater fish species. They do have sharp teeth.

Tank Region : Out and about much of the time but they do like a cave to hunker down in at night.

Gender : Don't know of any external differences between the male and female harlequins. 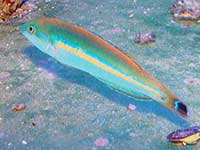 Pseudojuloides ceracinus
Pencil Wrasse
This wrasse can be on the difficult side to feed. They are poor shippers and need a period of adjustment with lots of feeding per day at first. Great looking fish once acclimated.

Pseudocheilinus hexataenia
Six Line Wrasse
Getting this fish past the acclimation stage is critical. They don't ship very well and often develop ich or show signs of other saltwater fish diseases. They might get aggressive with other wrasses. They grow to about 3 inches (8 cm) and are often kept in reef tanks.