The Green Mandarin is one of the most colorful of all marine fish species. These mandarin fish are sometimes called the psychedelic mandarin due to their coloration and markings. 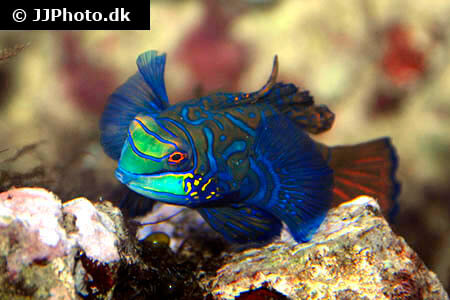 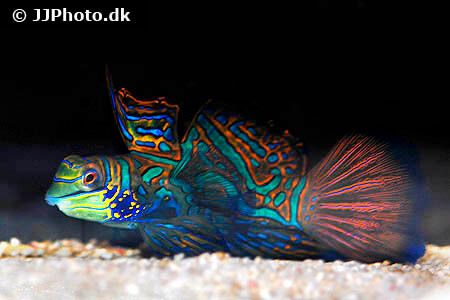 At first glance you might be thinking that a Green Mandarin, which only gets to a couple of inches in size, is the perfect fish for a nano tank setup. However, they are considered quite difficult to keep because it is difficult to get them eating standard marine aquarium foods. In the wild they hunt for pods (amphipods and copepods) throughout the day and in the aquarium they often slowly starve to death because there is not an abundance of these foods in the tank. A well established and larger tank of 55 gallons plus with lots of live rock and live sand is recommended before trying your hand at keeping a Green Mandarin.

The Green Mandarin will make good tank mates with most other species except for conspecifics. If keeping multiple mandarins in the tank aggression will be amplified in the absence or limitation of pods. A well fed mandarin is usually a more peaceful mandarin. They are also considered very resistant to most diseases because of their heavy slime coatings. This slime is also considered noxious to larger fish species that might otherwise consider a mandarin a nice snack. 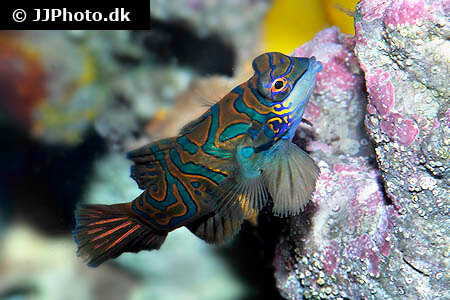 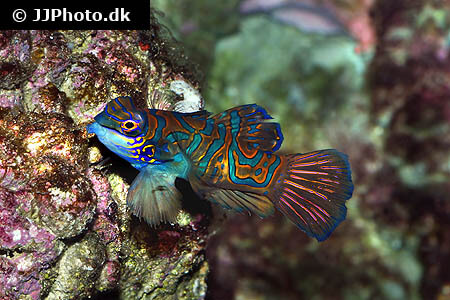 Overall this is an amazing looking fish that should only be kept by the more advanced hobbyists that can give them the proper foods on a regular basis. In smaller tanks without enough live rock, live sand and pods they will slowly starve to death. It is essential to get them eating normal aquarium foods like thawed mysis shrimp, brine shrimp, a good pellet food, etc. Feed them often and keep the aquarium water in top shape through regular partial water changes. They are considered reef tank safe but use caution since some hobbyists have reportedly caught them nipping at coral polyps. An attached refugium growing chaetomorpha will provide a good source of pods for your fish. Periodically shake or stir up the chaeto to release some pods into your display tank. 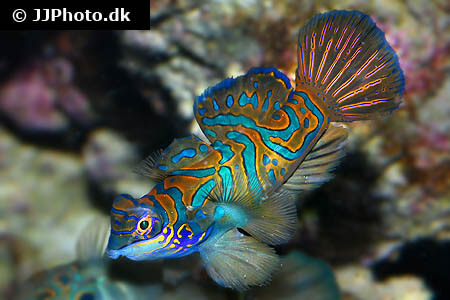 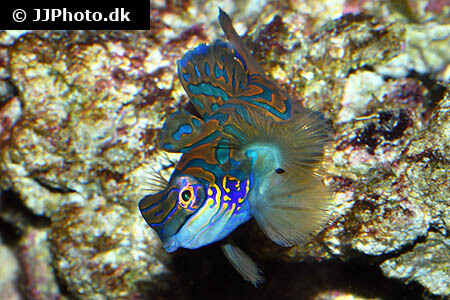 Temperament / Behavior : Males may fight with other male mandarins but is quite peaceful to other fish species. Other fish will leave it alone because of it's noxious slime coating and maybe because of it's markings and coloration.

Breeding : They have been bred in the aquarium. Females will pick the largest male and breed with them nightly. They are open water egg scatterers. The pair will rise to the water surface together (while remaining in very close contact with each other) releasing sperm and eggs.

Aquarium Size : 55 gallon (113 liters) minimum, preferably much larger tanks with lots of live rock. This recommendation is not due to their adult size, it's because of their feeding habits.

Tank Mates : Should do fine when kept with most other species except conspecifics - may fight with other male green mandarinfish.

Diet / Foods : The hardest part about keeping them... they need lots of live rock that will provide amphipods and copepods because they will hunt constantly for them throughout the day. Target feeding pods is a good idea too while trying to get them on standard aquarium foods like smaller pellets and thawed mysis shrimp, brine shrimp, etc.

Gender : Males become larger than females and have a much larger dorsal fin.