The Bubble Tip Anemone (Entacmaea quadricolor), aka BTA, has the reputation of being one of the easier sea anemones to keep and comes in a few different colors or varieties.

There is a brown, green and even a pink colored variety which is commonly known as the Rose Bubble Tip Anemone. 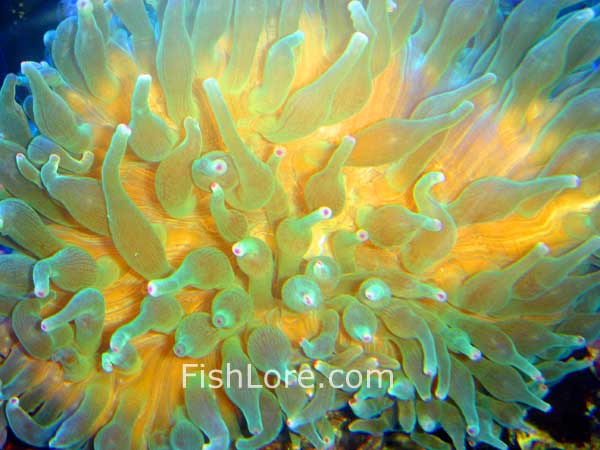 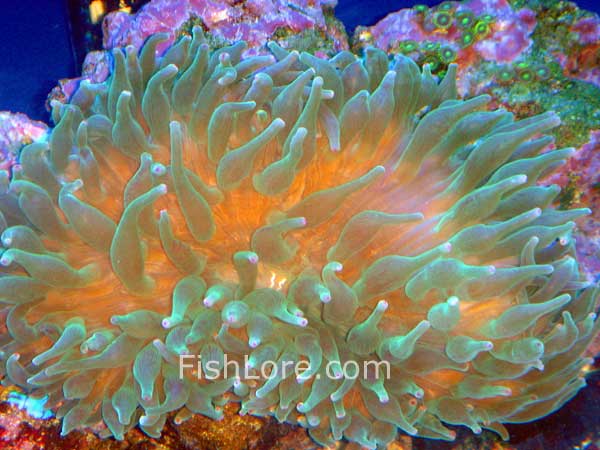 The signature of this anemone is the bulb tips that form towards the ends of the anemone's tentacles. There is much debate and speculation as to why these tips form.

Some think that very high lighting levels are required or even that more actinics are required in the lighting scheme and other hobbyists feel that frequent and varied feedings are required. Whatever the reasoning for these bulbs forming, for long term success with this anemone you'll need to provide high output aquarium lighting such as LED's, T5's, VHO, HO or Metal Halides. Power Compact lighting might work in shallow tanks. Supplemental feeding is a good idea too.

They will move to a spot in the tank or on the live rock that they find suitable. This might mean areas near power heads where they will eventually get shredded. I've had it happen myself. So, you may want to move they power heads up higher in the tank or put a foam filter over the power head to prevent this from happening.

You can manually split this anemone with a scalpel or extremely sharp scissors for a clean cut, sort of like coral fragging. In order to do this successfully you need to leave part of the mouth (the center of the anemone where the food goes) for each section. I've split them in quarters and in halves. Splitting them in half has a better success rate than splitting them into quarters. They will regenerate themselves over a period of several days. Pretty cool stuff and you can sell or trade them to friends in the hobby.

There are many clownfish species that will host with the Bubble Tip Anemone (see below), with the most common being the Maroon Clownfish. You don't need to have a clownfish to keep an anemone, though watching the symbiotic relationship between the clownfish and the anemone is one of the most fascinating aspects of aquarium keeping. The opposite holds true as well. You don't have to keep an anemone if you want to keep clownfish.


As mentioned previously you will want to feed your Bubble Tip once or even twice a week with either fresh, raw shrimp, clams, mussels, etc. Chop or slice this fresh seafood into very small pieces and use a feeding stick or tank tongs to give the anemone the fish food. We like to use a home made feeding stick that is 3 chop sticks taped together. Place the food on the end of the feeding stick and then gently place it on the tentacles of the anemone. They should grasp at it or show some other feeding response. 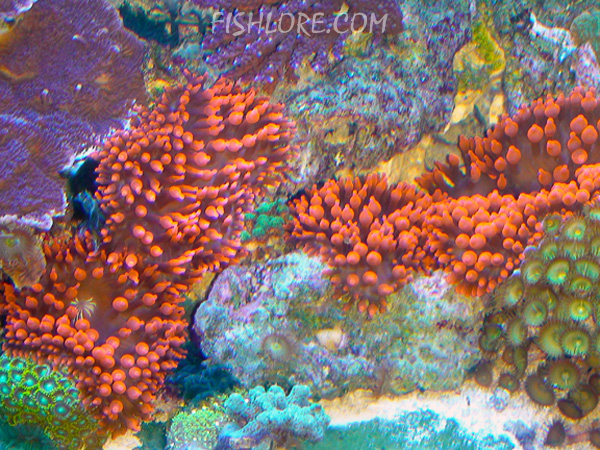 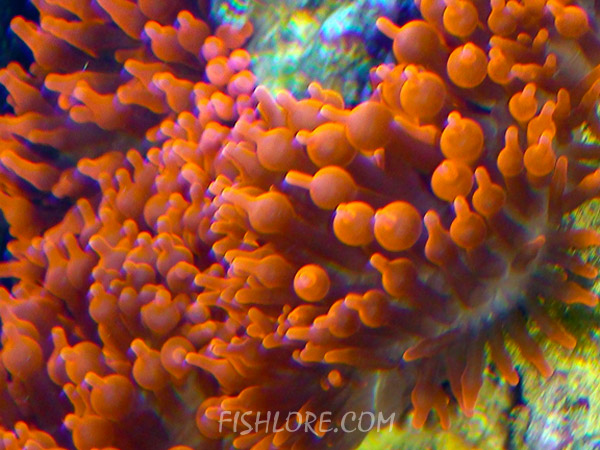 Anemones can live for a very long time and like your fish, they are a major commitment!

Lighting : Minimum recommended lighting levels would be 50/50 (actinic/10,000k daylight bulbs) power compacts in tanks with standard depth (24 inches). For tanks deeper than 24 inches you'll need T5's, LED's, HO, VHO or Metal Halides. They may move to find a spot they like and it may be related to the amount of light on the tank. They can adapt to a range of lighting levels.

Anemone Temperament / Behavior : They can move around the tank to find a suitable location. Ledges in live rock up off the sand substrate are often preferred locations. They can sting tank inhabitants with their tentacles, although it seems that it may be less potent than other anemone species.

Breeding : Both asexual and sexual breeders. Anemone reproduction has been studied using scanning electron microscopy. They most often will clone themselves by splitting. You can also cut them yourself into halves as long as a piece of the mouth and foot are attached to each half they will heal up quickly.

In the ocean they spawn between August and October when the surface water temperatures warm to reach 28 ° celsius.

Tank Mates : Can be considered for reef tanks. There was an interesting study done on the relationship between the anemone shrimp and E. quadricolor. It suggests that the shrimp gets the better end of the deal, though both species do benefit from the relationship.

Anemone Disease : Can be difficult to diagnose symptoms and corresponding diseases in anemones. Tanks with insufficient light and insufficient anemone feeding will often see them wither away after a few months. They prefer saltwater higher in specific gravity. Aim for water in the 1.023 - 1.025 range. Beware that anemones that are dying are believed to release toxins into the water that can harm or even kill tank inhabitants.

Diet / Foods : Supplemental feedings (twice per week) have been anecdotedly reported to induce cloning. Feeding can play an even more important role in tanks will lower lighting levels.

Tank Region : Slow moving, but often stationary in the tank once they find a suitable location.

Amphiprion perideraion
Pink Skunk Clownfish
They are about 4 inches (10 cm) in size as adults and do well in aquariums 30 gallons or larger.

Amphiprion frenatus
Tomato Clownfish
Getting to about 5 inches (13 cm) as adults these clowns are really hardy and are good choices for first time clownfish keepers.