The Red Emperor Snapper is one of those fish that in my opinion should not be as easily available to hobbyists as it is. The problem is that the Emperor Snapper gets way too big for 99 percent of home aquariums. They can get up to 45 inches (116 cm) and need lots of swimming space. Some of the stores (both online and locally) recommend a tank in the 200 gallon range which to me is way too small for a fish that can grow to over 3 feet in size. As juveniles they have black and white stripes but as they mature they take on more of a red color with the stripes fading.

The Emperor Snapper needs to be fed bigger and bigger food items as they grow. As juveniles they will eat frozen or fresh chopped pieces of fish, clam, scallops, shrimp, etc. When they start getting large, feeder fish and large carnivore pellets should be on the menu.

As juveniles they can be kept in groups but as they mature they may begin fighting with each other and it's recommended to keep only one Emperor Snapper per aquarium.

For the most part, they acclimate to aquarium conditions well and they are somewhat easy to feed. The main problem is the size they can reach and the fact that most hobbyists simply can't afford the aquarium accommodations this snapper needs. If you see this snapper in the store, check it out. Admire it in the store's tank and then keep on walking. 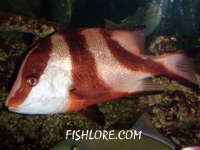 Care Level : Difficult, this snapper needs an enormous tank that would have to be custom built to keep one of them adequately.

Temperament / Behavior : This snapper is a voracious eater and will eat smaller fish and invertebrates. They need to be kept in an extremely large aquarium with other large fish species.

Breeding : Don't know if it's been bred in an aquarium setting yet. These snappers are open water substratum egg scatterers and do not guard the eggs.

Tank Mates : Other large fish species that can fend for themselves.

Tank Region : As juveniles they are somewhat reclusive and shy so they need plenty of available hiding places. They get less reclusive/shy as the get bigger and will be all over the tank.

Gender : Don't know of any external characteristics to use to differentiate the male emperor snapper from the female emperor.