The Eibli Angelfish is often available and not all that expensive either. The Eibli has a variety of common names including the Blacktail Angelfish, the Orangeline Angelfish and in some circles it's called Eibl's Anglefish. They are found on the reef at depths of 1 to 30 meters (3 - 90 feet) and are often found among groups of Halfblack Angelfish (C. vrolikii) which they may inter-breed with.

You'll read several places that say you can keep them in tanks as small as 30 gallons (114 liters) but a 55 gallon would work out better given their potential adult size of 6 inches (15 cm). The Eibli is one of the bigger of the dwarf species. 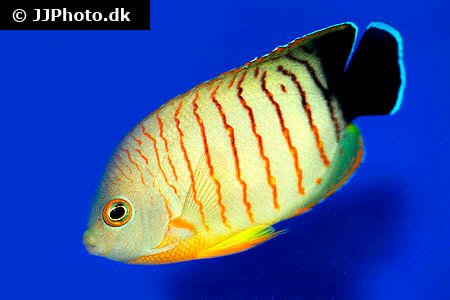 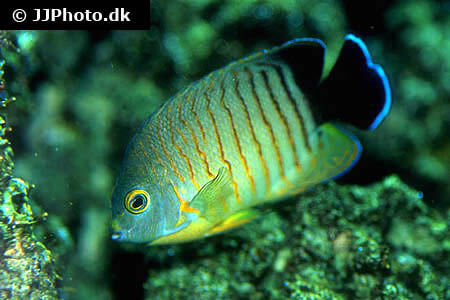 Like the other dwarf angels you'll want to keep only one of these Eibli Angelfish per tank because they will fight with other dwarf angelfish. Provide plenty of hiding places for them and they should be out and about more often. They have the reputation of being very shy, but ours is extremely inquisitive and does not shy away from our hand when doing tank maintenance. Keeping them in a reef tank setup may not be a good idea. They might nip clam mantles and corals.

Feeding Eibli Angelfish can be a little challenging at first. Try introducing a variety of saltwater fish foods several times a day. Two small feedings a day would be good. Ours went after defrosted mysis shrimp right away, but didn't take to the algae on the veggie clip at first. Placing a small piece of dried algae sheet under a rock did the trick. After it was used to nipping at the algae under the rock we tried the veggie clip again and it worked. You may need to get creative trying to get them to eat.

All the dwarf angelfish can easily get the common saltwater fish diseases so a quarantine tank is a good idea.

Care Level : Easy to Moderate, take your time acclimating the Eibli to your aquarium.

Temperament / Behavior : They will fight with other dwarf angelfish in the home aquarium. They do best kept one dwarf per tank.

Breeding : Considered extremely difficult to breed in captivity, the Eibli are protogynous hermaphrodites (females turn into males). Breeding tanks are usually taller because of the interesting way in which they breed. The dwarf angels are harem breeders with one male for several females. They circle each other and then rise simutaneously to the surface releasing gametes. The male then moves on to the next female. Getting them to spawn may not be all that difficult (for professional breeders) but raising the Eibli Angelfish eggs is an entirely different matter, requiring super tiny (plankton like) foods as they advance through their various growth stages. There are several hybrids or other species that cross breed with this species.

Aquarium Size : 30 gallon (114 liters) minimum for one dwarf angel, much larger if you plan on keeping multiples. The Eibli Angelfish would do better in a 55 gallon tank since it can get a bit bigger than other dwarf angelfish.

Tank Mates : Avoid keeping them with larger eels, lionfish or any fish large enough to eat them. Keeping them in a reef tank seems to be hit or miss, use caution. They might nip clam mantles, soft corals and zoanthids. It's not recommended to keep more than one dwarf angelfish per tank because of aggression.

Fish Disease : Saltwater Fish Disease - Diagnose, Symptoms and Treatment. A quarantine tank is a must! They can easily get cryptocaryon when stressed. Provide stable water parameters, highly nutritious foods and a uv sterilizer might help.

Diet / Foods : Omnivorous, but try to give them a balanced diet of algae and meaty marine foods. They should eventually accept vitamin enriched flake foods, frozen and live foods. Having live rock is a great idea because it will provide grazing opportunities. Try for at least two small feedings every day.

Tank Region : All over the tank, likes to have hiding places in the rock work. 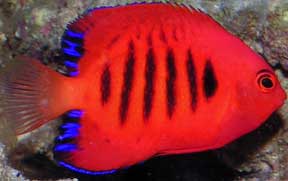 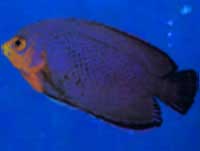