The Diamond Goby (Valenciennea puellaris) has a few different common names. In some circles the Diamond Goby is also known as the Maiden Goby or the Orange Spotted Sleeper Goby. 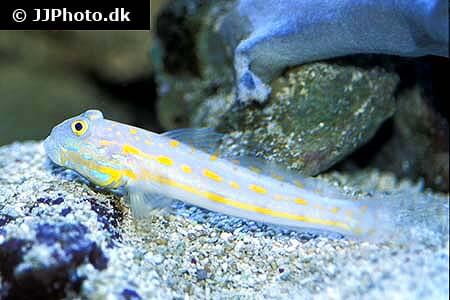 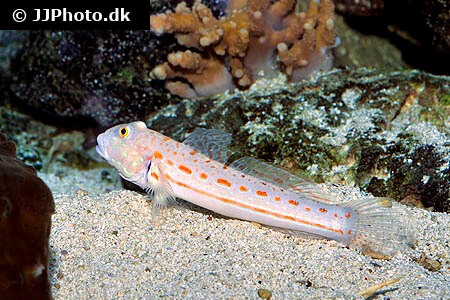 This goby can get to be about 6 inches (15 cm) in total length and they are considered a peaceful utility fish. They have orange dashes and dots running the length of the body with cyan colored markings on the jaws. Their heads are quite large and their jaws must be quite strong because they have to sift in the sand for their food.

On the reef the Diamond Goby is often found in pairs that are thought to be monogamous. They will create a burrow in the sand bed where they can retreat to at night or at signs of danger. It can be quite entertaining to watch these gobies do their thing. They take mouthfuls of sand and build mounds around their burrows. Some recommend that you keep them in tanks with sugar fine sand and to avoid the larger particle sands because the thought is that they can damage their mouths.

A large live sand bed is very important since these gobies rely on it for food. A benefit of their sand sifting is that they keep the sand looking very clean because they are constantly turning it over. There is a downside to this behavior though. They have no regard for your prized clams or mushrooms along the bottom of the live rock. They will form mounds or even cover smaller corals. You will have to do some "redecorating" often if you plan on keeping them in your aquarium. It can be well worth the effort with the sparkling white sand. Ahh, that's nice.

The Diamond Goby should be able to live for several years if you can keep them well fed. This can be a little challenging at first, but it's really not hard to make sure they are getting enough to eat. Use a feeding stick or similar device to place some fish food such as mysis or brine shrimp or even fresh finely chopped shrimp from the grocery store under the sand near their burrow. They should be able to smell it and will go looking for it. Eventually they should be able to associate the feeding stick with dinner and may start to take the food directly from the stick before you can place it under the sand. Try it and see for yourself. Very cool indeed.

These orange spotted sleeper gobies have a good reputation as being very hardy and disease resistant, but don't risk your display tank with new acquisitions. Always use a quarantine tank for a few weeks at least!

Finally, if you have a functioning deep sand bed (for nitrates reduction) you will not want to keep these gobies. They will disturb deep sand beds by sifting the sand. 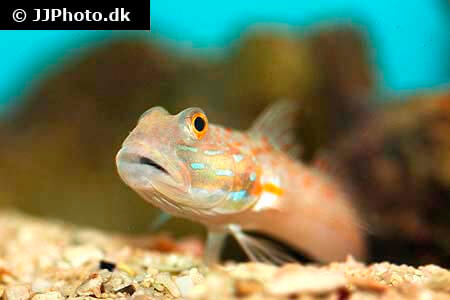 Temperament / Behavior : Usually quite peaceful but may scrap with other gobies. Fishbase states that they are found in monogamous pairs in the wild.

Breeding : They have reproduced in the home aquarium. The male/female pair will place the fertilized eggs on the top surface of their burrow. The male will guard the nest while the eggs are developing. In 3 to 4 days the larvae should hatch and become pelagic (released into the currents). It can be quite challenging to feed the larvae the very fine foods (plankton) they need to develop.

Aquarium Size : 55 gallon (208 liters) minimum, with a live sand bed. They build burrows usually near the live rock in the sand bed.

Tank Mates : They should do just fine with most fish tank mates and invertebrates such as snails and clams, but don't keep them with fish large enough to view them as food such as lionfish, triggers, etc.

Reef Tank Compatible? : Depends on who you ask... We consider them a good fish for a reef tank setup. If you have a deep sand bed that you don't want disturbed then pass on this fish.

Diet / Foods : This goby feeds on pods and other tiny invertebrates in the sand bed. They shovel or scoop sand into their mouth and then sift the sand in their mouth and then pass it through their gills. They are sifting for food and a large live sand bed is very important to maintain them long term. You can also use a feeding stick, turkey baster or similar and place food in the sand near their burrows. You can ween them onto most foods. Tiny pieces of defrosted frozen mysis and brine shrimp, clam and other meaty marine foods should be offered.

Tank Region : Often found near it's burrow in the sand bed.

Gender : To our knowledge, there is not a way to determine external differences between male and females of this fish species. Some think the females will be larger.

Cryptocentrus cinctus
Yellow Watchman Goby
This goby forms a symbiotic relationship with the pistol shrimp. They may scrap with other goby species, so use caution when stocking.

Nemateleotris decora
Purple Firefish
In our opinion one of the most beautiful fish species available. They are rather hardy and great jumpers. A good fitting hood with no holes for escape is needed.