The Coral Hind Grouper sometimes goes by the common name of just the Coral Grouper and sometimes even the Miniatus Grouper.

This grouper is quite colorful with a red or orange looking body with lots of light blue colored spots. When they are small they may be shy and will appreciate lots of hiding places but as they grow, things change. They get big and can be aggressive with other fish species.

To keep a Coral Grouper you are going to need a tank that is 180 gallons or larger for long term success and plan on feeding them feeder fish, larger shrimp, pieces of chopped up fresh or thawed fish, etc. If you want to keep them with other large fish then you're going to need an even bigger tank and plan on having an over sized protein skimmer along with regular partial water changes. 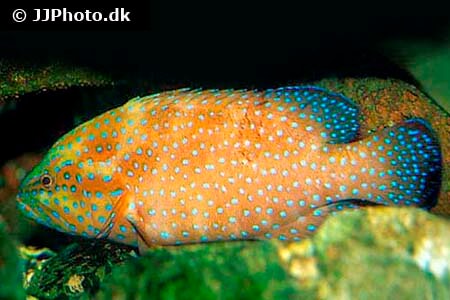 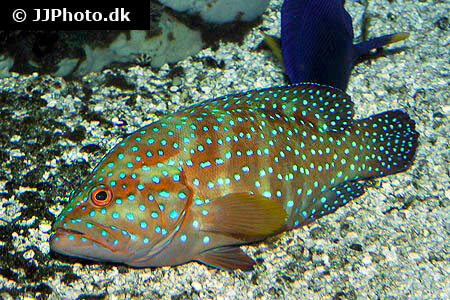 This grouper should adapt well to the aquarium provided that the tank is a suitable size and you are feeding it appropriate foods. Do a drip acclimation over an hour or so. Plan on a longer acclimation time if the water chemistry (pH, SG) from the source is much different from your tank.

Overall this is an awesome looking saltwater fish and can make a great pet for the person willing to give it what it deserves. But given it's temperament and it's requirements, most saltwater home hobbyists should take a hard pass on this species. 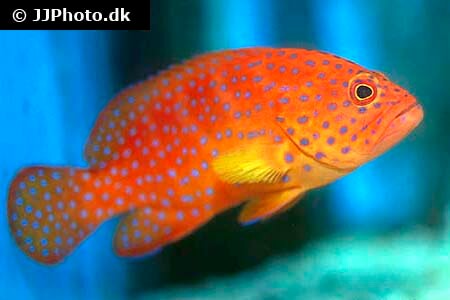 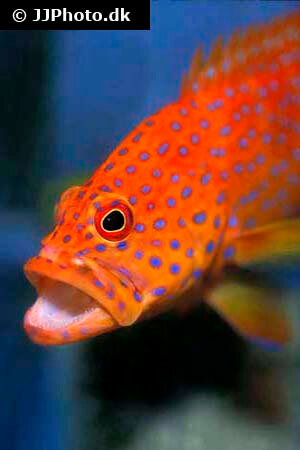 Origin / Habitat : Indo-Pacific, Red Sea and most islands in the Indian and west-central Pacific oceans at depths from 6 to 490 feet (2 to 150 meters).

Temperament / Behavior : The Coral Hind Grouper is considered very aggressive and will not tolerate a conspecific in the same tank and will chase off other species that enter it's "turf".

Breeding : Open water egg scatterers. In the ocean they form harems comprised of one dominant male and 2 to 12 females (ref. Fishbase). Not sure of any successful aquarium breeding attempts.

Aquarium Size : 180 gallon (681 liters) minimum, preferably much bigger since they can be big and messy eaters.

Tank Mates : The coral grouper should be kept with similar sized species and it should be given plenty of territory to lay claim to.

Reef Tank Compatible? : Likely will not bother the corals, but may eat the smaller fish and saltwater invertebrates.

Diet / Foods : Will need to be fed larger marine foods like silversides, squid, Krill, shrimp, chopped up fresh and frozen foods. etc. In the ocean they eat a lot of Pseudanthias squamipinnis (Anthias) (ref. Fishbase). On the reef they hunt small fish and crustaceans.

Tank Region : Likes to swim the middle to bottom portions of the aquarium but will move/swim to wherever it wants because it's a Coral Grouper!