The Blue Angelfish (Holacanthus bermudensis) is an angelfish that looks very different as juveniles. They have much darker black shadings with white vertical stripes. As they grow into adults they transform into magnificent looking fish like the one pictured above. The Blue Angel is often confused with the Queen Angelfish but the two are easily differentiated. The Queen Angel will have a "crown" or circle on it's head.

The hard part about keeping this angelfish is their diet. As juveniles they will eat algae and sponges and as they grow they develop a preference for sponges over the algae. You need to get them on standard aquarium fish foods and marine angel foods with sponges (comes in frozen cube packs) as soon as possible for long term success in keeping them.

The Blue Angelfish is being sold for around $150 to $300 depending on size. 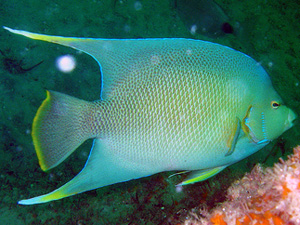 Origin / Habitat : North Carolina down to South Florida and then south to Bermuda. Gulf of Mexico - often found near rocky reef-like areas

Reef Tank Safe? No they are not considered reef tank safe - may nip at LPS, SPS and clam mantles.

Temperament / Behavior : May fight with other marine angelfish.

Breeding : No reports of successful breeding attempts in the home aquarium.

Tank Mates : May fight with other saltwater angelfish.

Diet / Foods : Feed them several times per day with specialized marine angelfish formulas heaving in sponges. They will pick at the live rock throughout the day.