The dorsal fins on this fish are venomous so we need to handle them with care. Be careful when netting them so that their fins don't get caught in the net. If this happens, gently move the net slowly back and forth until the fish relaxes the fins and you can release it into the tank. Seek medical attention if the venomous fins puncture your skin.

Foxface Rabbitfish should play nicely with other fish but will probably not tolerate other rabbitfish in the same tank. You may be able to keep multiples (especially if they are of the opposite sex) in very large tanks. However, given their potential adult size of 8 inches (20 cm) and their intolerance of their own kind in the cramped confines of most home aquariums, you should probably plan on keeping only one of them in your aquarium.

This rabbitfish primarily feeds on marine algae (nori) and having lots of live rock in your tank will provide plenty of grazing opportunities in between meals. Try to give them a varied diet and supplement their diet with marine seaweed using a veggie clip. Reef tank keepers may not want them in their reef tanks because they may nip at some corals.

One Spot Rabbitfish seem to be fairly fish disease resistant but you still need to take proper pre-cautions and use a quarantine tank before introducing them into your main tank. Keep them in the hospital tank for two weeks or so and watch for obvious saltwater diseases, like marine ich. 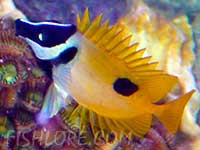 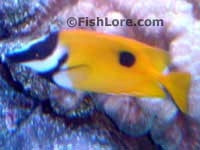 Foxface Care Level : Easy to Moderate, can be a good choice for a saltwater beginner with a big enough tank.

Temperament / Behavior : They can be aggressive with other rabbitfish but may be able to co-exist with a member of the opposite sex. Other fish should leave them alone because of their venomous dorsal fins.

Tank Mates : Use caution when selecting tank mates. Avoid keeping them with other rabbitfish and keep them well fed in reef tanks. They will nip at soft corals when hungry.

Diet / Foods : Primarily an herbivore, try to give them a variety of marine foods but predominantly marine algae. Having plenty of live rock for them to graze on goes a long way. They should accept vitamin enriched flake foods, frozen and definitely live foods.