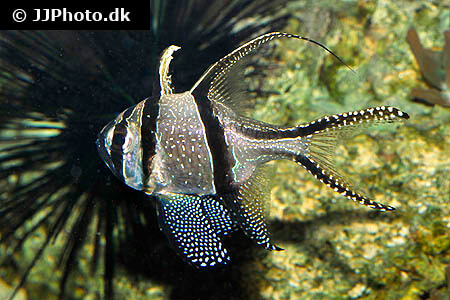 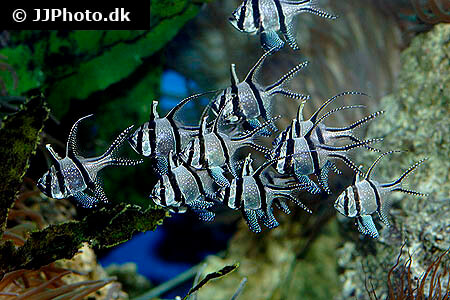 It is interesting to note that these Banggai Cardinalfish are only found in a rather small area around Banggai Island off Sulawesi. This fish is very close to being placed on the endangered species list because of over collection. Before you purchase one, ask the retailer where they come from. If they say that is was wild caught, please don't buy them. Only buy captive raised or aquacultured specimens. Doing so will help those wanting and willing to aqua culture this species and we definitely want to reward these breeders. Another benefit from getting captive raised Banggai Cardinals is that they usually acclimate much easier than wild caught fish.

The good news is that these little guys are one of the easier saltwater species to breed. The males are mouth brooders which should increase the chances of successfully raising the young. The difficult part is figuring out if you have a pair. You may only be able to accurately tell once they've paired off. If you're really interested in breeding this fish and you have the appropriate equipment and tank setups you can buy a group of 3 and see if 2 of the 3 start to pair off. If they do, you may also notice them going after the third cardinalfish. If this happens and they are in a smaller tank, you will need to remove the third before it is hassled to death. 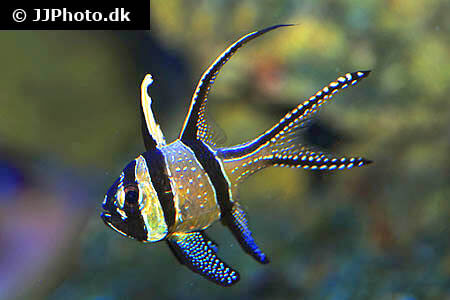 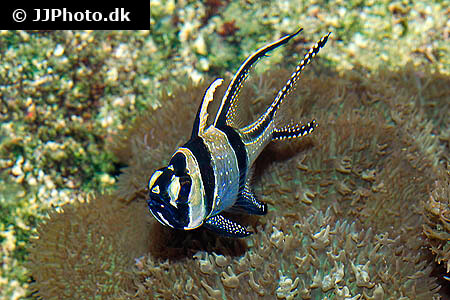 If your Banggai Cardinalfish end up breeding you may notice that the mouth on the male will be bulging at the jawline and they aren't eating anything. They won't even go after their favorite fish foods! The male will mouth brood the fish and then release them after 20 days or slightly longer. 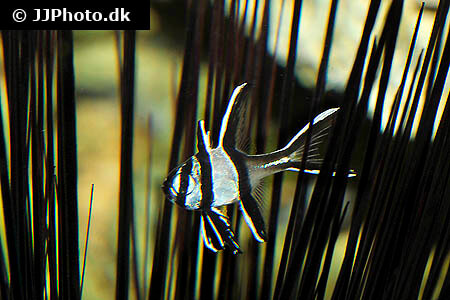 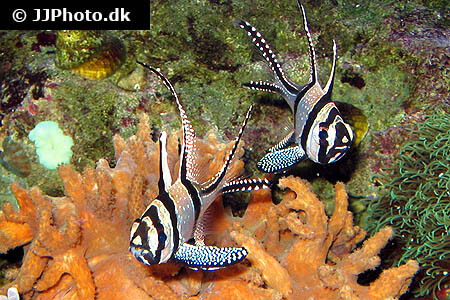 Take your time when acclimating these cardinalfish to your tank water. Once introduced they may hide out for a day or two but should come out once food hits the water. Give them lots of security by providing hiding places (think live rock) and they may be out in the open more.

Feeding them can be challenging when first introduced to your tank. They can be quite finicky and will probably not go after flakes or pellet foods. You may need to start with frozen or live fish food and then try to get them onto vitamin enriched flake foods. Aqua cultured specimens should be a little easier to feed.

You may be able to keep multiple Banggai Cardinalfish in the same tank if it is sufficiently large enough. If you cramp multiples into a smaller tank you will probably see aggression among them, especially once a pair has formed.

They seem to be fairly disease resistant but you still need to take proper pre-cautions and use a quarantine tank before introducing them into your main tank. Keeping them in quarantine can also give you a chance to get them eating without any competition from others.

Origin / Habitat : Indo-Pacific, specifically around the coasts of 33 islands in the Banggai Archipelago.

Temperament / Behavior : Avoid keeping more than mated pairs in smaller tanks. May be able to keep more in larger aquariums. Watch for aggression among individuals and remove some if necessary.

Breeding : This fish has been bred in the home aquarium and among saltwater fish, this is one of the easier ones to breed. They are mouth brooders, or more specifically the male will mouth brood the fry until they are ready to be released. You will need to separate the adults from the young once released. Do a search on "Frank Marini" who has written some excellent articles on the breeding of this fish. His cardinalfish breeding articles are well worth the read if you are the least bit interested in breeding this fish.

This species is heavily exploited for the aquarium trade and is only found in a limited area. Try to buy captive bred specimens when possible and it is definitely worth paying more for the captive raised species!

Tank Mates : May be able to keep a small school of these in larger aquarium setups with peaceful tank mates. Could be considered a reef safe fish.

Reef Tank Compatible? : We've kept them in a reef aquarium with snails and shrimps and anemones and they shouldn't pose a problem with corals.

Diet / Foods : Primarily a carnivore, they are thought to feed on smaller crustaceans in the ocean. Getting them to eat can be a problem when first introduced. You may need to start with frozen foods and maybe even live foods to entice them. Try to get them on vitamin enriched flake foods and supplement with frozen fish food. That may be easier said than done though. They may need a steady supply of frozen and live foods for some time.

Gender : It can be difficult to determine the sexual differences between male and female banggai cardinalfish until they are ready to breed. The male's lower jaw may be more rounded (for mouth brooding?) whereas the female's jaw may be more straight lined. Another sign may be a much longer second dorsal fin on males. You may only be able to determine that you have a male/female combination when they pair up.