The Azure Damselfish (Chrysiptera hemicyanea) is a nice looking little damselfish with a half blue and half yellow body. The Azure Damsel gets to be about 3 inches and are usually sold for $3 to $10 each. The colors on this damselfish really are amazing and they look awesome under actinic lighting. 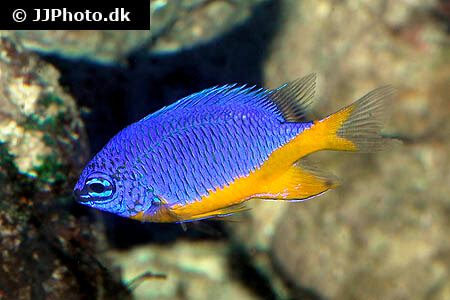 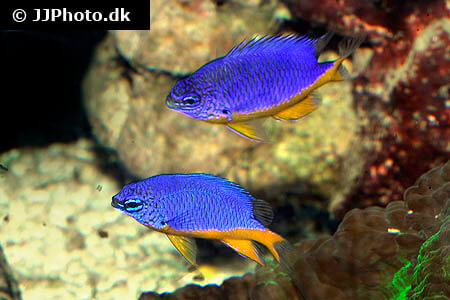 Like most damselfish species, the Azure Damselfish is considered very hardy and often recommended to new hobbyists as a good first fish in new tanks. While it is true that they are hardy, damselfish are not always a good choice because of their temperament. They may fight with themselves and with less aggressive fish in your tank. However, the Azure Damsel is considered one of the less aggressive species of damselfish and hobbyists sometimes keep them in groups in a larger saltwater aquarium setup. In the aquarium, keeping a group of them might be a problem because of constant fighting for territory. But if you get a big enough group of them the fighting may be spread out enough so that one fish isn't the lone target. 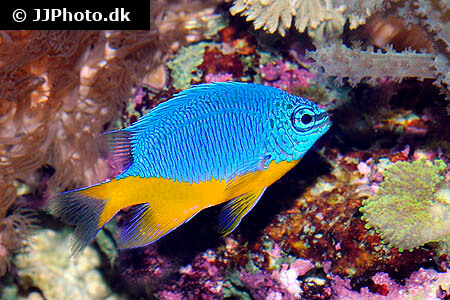 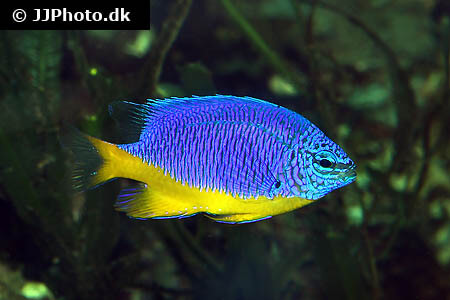 In the ocean they like to live amongst acropora coral heads in shallow waters. They feed on plankton and then retreat back to the safety of the coral or live rock. They will go after smaller pellet foods and flake foods. Thawed foods like the cube packs that can be thawed and fed in small amounts work really well. You should be able to find the frozen cube packs of mysis shrimp, brine shrimp, etc. at your local chain store or reef shop.

Please don't use them to cycle a new aquarium. The most humane method is to use live rock that is cured already and then slowly stock the tank. 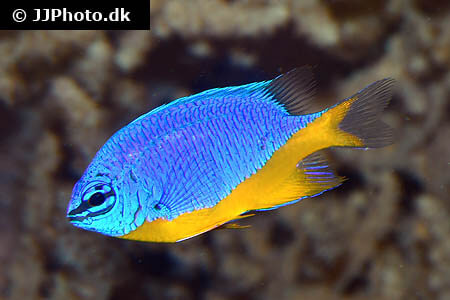 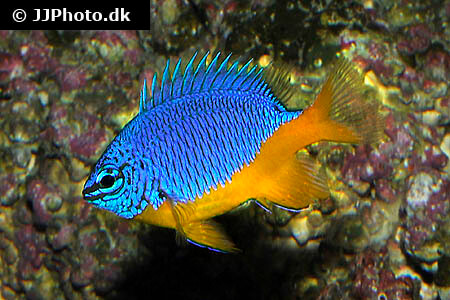 Care Level : Easy, good for saltwater beginners but keep in mind that they can be aggressive for a smaller fish.

Origin / Habitat : Indo-Pacific, Eastern Indian Ocean. Found in lagoons and near shore often in small groups amongst acropora coral. They have also recently been found in the Mediterranean Sea

Temperament / Behavior : Much like other damselfish, although very hardy this one can be moderately aggressive. They may harass fish that encroach upon their perceived territory.

Breeding : these damselfish are egg layers and they form pairs for mating. The eggs are sticky and stick to the substrate where the males guard them until hatch.

Tank Mates : Don't keep them with predatory fish that are big enough to eat them.

Reef Tank Compatible? : Should be fine with corals and invertebrates.

Fish Disease : Saltwater Fish Disease - Diagnose, Symptoms and Treatment - damselfish are some of the hardiest of saltwater fish species available to the hobby. People even used to use them to cycle new tanks. But it is no longer necessary to cycle a new aquarium with live fish.

Diet / Foods : In the ocean they primarily feed on plankton. In the aquarium they will do fine with flakes and smaller pellet foods (spectrum thera-A small fish size) and fresh and finely chopped pieces of marine origin foods.

Gender : No known external characteristics to differentiate males from females.

Chromis cyaneus
Blue Reef Chromis
Similar in temperament to the Green Chromis, these Blue Chromis do well in schools too and look simply fantastic.

Chrysiptera parasema
Yellowtail Blue Damselfish
This is a very hardy damselfish and they can be very territorial, even with species much larger than them. 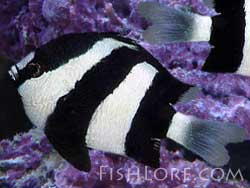