Keeping coral in a reef aquarium can be a lot of fun. Some consider keeping a saltwater reef tank full of coral the ultimate set up in the hobby. It can definitely be one of the most expensive aquarium setups and also one that requires lots of research before you buy your first piece of equipment. If you're not interested in the doing the leg work by researching these animals before you buy them you should probably reconsider what you want to get out of keeping a reef tank setup. Keeping corals in the home aquarium can be extremely rewarding although challenging at times. The decline of the world's reefs makes it even more important that we gets things right the first time. 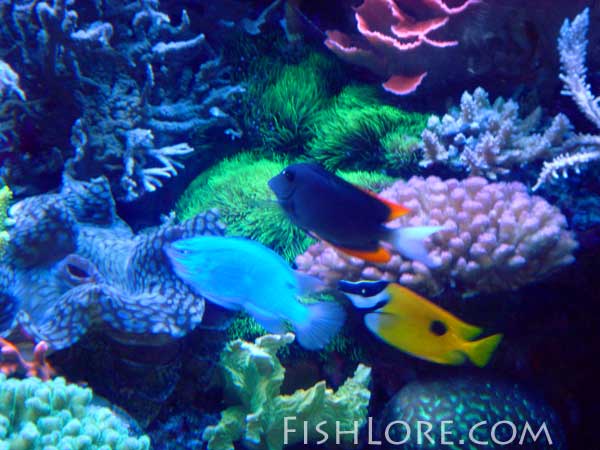 You'll hear some people argue that keeping corals is unethical or as harming the reef. While the aquarium trade certainly has an impact on the reefs, we feel that the knowledge and appreciation gained from keeping these animals far outweighs the very minor impacts from collection of these species for the aquarium trade.

As more hobbyists become reef tank keepers, more will come to appreciate the fascinating habitats found on the coral reefs and perhaps we can help educate others of the reef's importance. Captive propagation is really gaining steam and hopefully someday soon we'll be trading in mostly captive raised corals. There are even some scientific institutions/organizations that are revitalizing areas on damaged reefs with captive raised corals! There are also scientific and medicinal advances from corals currently being researched. That's another article altogether though. 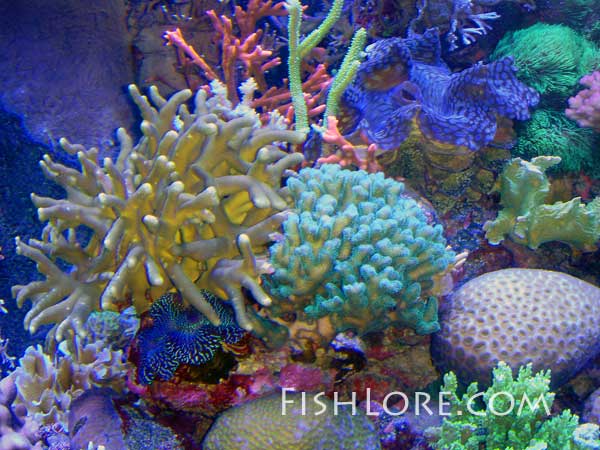 Although the investment in your reef tank and corals can be significant, there is the possibility that you could recoup some of your costs by fragging and selling to other hobbyists or trading in frags at local shops for store credit. Again, captive propagation or fragging your own corals is also great for the real reefs because it places less demand on them from the aquarium hobby.

This is a very general article on coral keeping to "get your feet wet". More articles will be coming in future magazine issues on more detailed topics. Ok, let's talk about some of the main topics and things to keep in mind when venturing into coral keeping.

You will need to keep the reef tank water parameters at optimal levels in order to keep corals in your aquarium. Generally speaking this means keeping the water near the following levels: 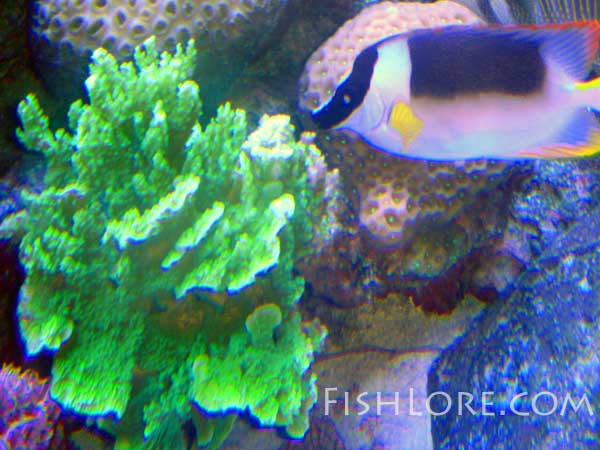 This may mean that you have to perform regular partial water changes and/or supplement with various saltwater aquarium additives. It's usually more economical to perform partial water changes on a regular basis though. You also don't want to be adding saltwater supplements if you cannot test for them. How will you know how much is too much or not enough when you're dosing these supplements? If you wind up with a tank packed full of corals you will probably have to dose kalkwasser or use a buffer and calcium additive of some sort to meet the needs of the ever growing corals. Get used to testing aquarium water parameters more often than you would with a basic saltwater aquarium setup.

Corals need turbulent water conditions to bring food to them and to wash off mucus that can develop due to aggravation from others and/or to wisk away sediment that has fallen into or on the coral. High turnover in the tank is definitely recommended. 20 or 30 time per hour is a good flow rate to aim for with some reef hobbyists having even higher flow rates in bare bottom tanks. You also want "turbulent" water conditions. A uni-directional, linear or one way flow could damage your corals. Configure the power heads or closed circulation outlets so that they outflows point in different directions to create the turbulent effects. Or point them in a way that makes their outflows smash into each other. There are quite a few devices you can buy for the output nozzle on power heads to create a circular or wave type motion for the outflowing water. Also keep in mind that submerged power heads can add heat to the tank water. 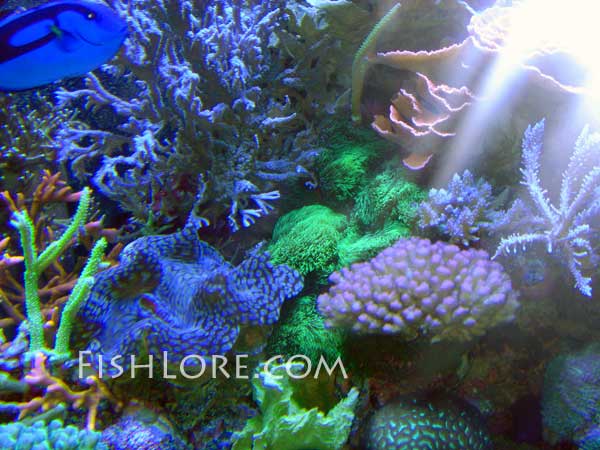 The amount of aquarium light needed for keeping corals depends on what you want to keep. Corals that host zooxanthellae need light to live and grow and these are called hermatypic corals. Corals without zooxanthellae are called ahermatypic and these are often found in places where not a lot of light reaches in the ocean. They get most of their energy needs from filter feeding and capturing living organisms. So, deciding on a particular lighting setup needs to come after you decide on what you are wanting to keep. Here are some general recommendations to get you started:

Again, it all depends on the corals you're wanting to keep. Lighting a reef tank may be one of the most expensive parts of keeping corals. Not only the initial purchase of the lights but also the ongoing costs of electricity for running them 8 - 12 hours per day. These high output lights can also add significantly to the tank temperature. An aquarium chiller (expensive) might be needed with high output lights. 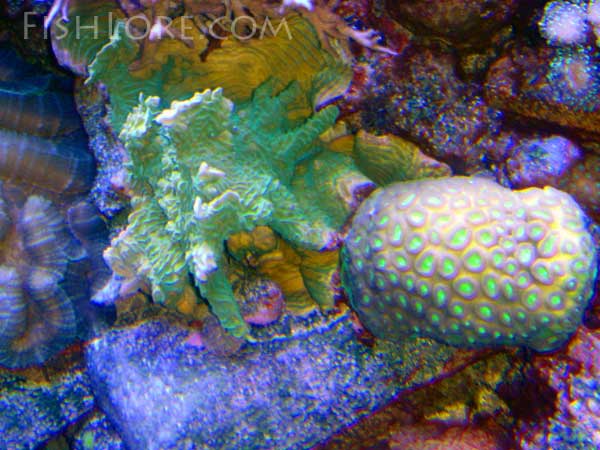 Coral Food - To Feed or Not To Feed?

You'll often hear folks brag about how they don't feed their corals anything and they grow like crazy. Maybe this is true, maybe not so much. Hermatypic corals get much of their needed energy from the zooxanthellae living within them. Zooxanthellae primarily need light, so theory goes that if you give them enough light they'll be fine. But, some swear that by feeding your corals you will see a nice increase in growth rates. We fall in with those that feed their corals. Target feed large polyped stony corals very small quantities of coral food when the lights are off and their polyps are extended. You don't want to pollute the tank with wasted foods.

Ahermatypic corals will almost always need to be fed and they could be considered some of the most difficult to keep for the average hobbyist.

Some corals can release chemical compounds into the water that can damage other corals. One of the reasons so many reef hobbyists use activated carbon (in addition to clarifying the water) is to filter these compounds from the water and perform regular partial water changes.

So, the main point here is to find out the behavior of the corals you plan on keeping and if they'll do well with other corals you're considering. Mixing dissimilar coral species in the same tank is not the best idea. I know, you see these types of tanks mixing soft and stony corals everywhere you look. It's sort of like when you see a tank packed full of fish on the cover of a book or magazine. It makes a pretty picture but can be quite the headache to try and maintain long term. At the minimum, give your corals plenty of space in between them. 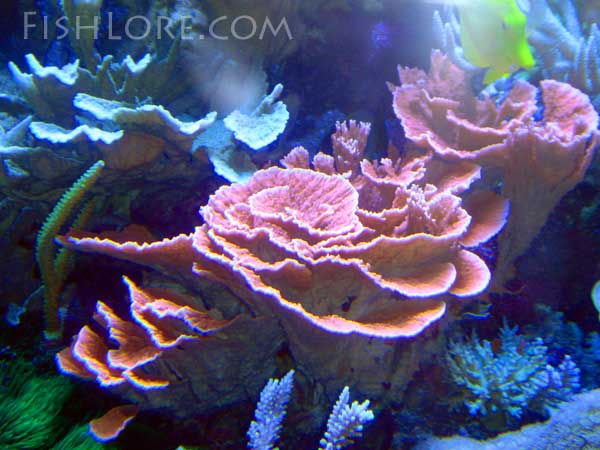 So after you've researched thoroughly the corals you want to keep you get out your wallet, fork over the money and bring them home. They will most likely be a coral frag on a plug of some sort. That's unless you have a ton of money to buy a full sized specimen. Either way you'll need to secure it in the tank. There are several products on the market for affixing corals. Super glue works well on hard corals. You have to remove the piece of rock you'll be attaching it to from the tank, dry off the area on the rock you're wanting to place the coral on and then attach the plug or coral to the rock using the super glue. Let it sit for a minute or so and the place it back into the tank. If you're lucky you may have some holes just the right size already in the live rock to place the coral plugs.

There is a new product out from Echotech Marine called Cg Coral Glue. That glue works rather well for attaching stony corals. It is just like super glue but in more of a gel form that makes working with it really hassle free. Good stuff.

Soft corals can be a little trickier. Sometimes these frags come in on small shells instead of the frag plugs. You can attach them to the rock work using tooth picks or something similar. Or wedge the item it's attached to already in between a couple pieces of rock.

Where exactly in the tank they belong you should already know from your research. Right? The depth they should be placed at depends on their lighting needs and the lighting system you have. It's always a good idea to slowly acclimate the coral to your lighting. If you have metal halides or T5's you may want to place hard corals toward the bottom of the tank and slowly move it up over a period of a week or so to get it used to your lighting setup.

There are tons of corals available out there. They are also very expensive and can be quite delicate in the home aquarium. Is it difficult to keep corals? Yes, some are quite hard to keep but some are not at all difficult. If you're really interested in keeping corals you will need to get used to doing research on the corals you're interested in keeping. While finding detailed information on the exact species you're interested in keeping can be challenging at times, usually finding out about the "family" in which it belongs can give you many clues on it's upkeep. Pick up a book on corals from the library or book store. We've reviewed some really good books here on FishLore. See the book reviews here:

If monitoring test results on a semi-frequent basis (at least at first) and keeping a watchful eye on the tank water sounds like too much, then you may want to rethink keeping corals. However, it is quite fun and rewarding to frag your first coral after it has grown enough to be fragged. Then placing those frags in other locations in your tank or someone else's tank and seeing them flourish is the ultimate.

The reef tank side of the saltwater aquarium hobby is quite fun if you do your homework!