If you have been wanting to get a power head that is also a wavemaker for your saltwater tank, then look no further than Zoomed's line of Power Sweep power heads. Using just one of Power Sweep power head gives you the ability to create water movement that before would have required 2 or even 3 power heads to replicate. Having two on opposite ends of the tank can produce some fairly chaotic currents needed for many saltwater aquarium setups. Many marine aquarium keepers will think that these are exactly what the doctor ordered. The Power Sweep power head is an automatic self-rotating wavemaker that comes in three different models, each with a different flow rate, measured in gallons per hour (GPH). 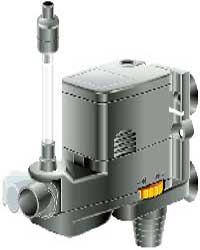 They all have an adjustable flow rate that will allow you get the desired flow for your particular setup. The will fit all undergravel filter stem sizes and also comes with a pre-filter for the intake and a mounting bracket with suction cups. There is also a venturi aeration hole where you can use the aquarium tubing (comes with product) to mix in air with the wavemaking water motions. There is no way to regulate the amount of air entering the power head other than using a small screw (does not come with product).

The one we are using has been in use for approximately 4 months and so far so good. It is the Power Sweep 214 model and we are using it in a 10 gallon nano saltwater tank. Again, we are pleased with this product and would recommend it to other hobbyists.

Check out the video below showing a clever way to modify the power sweep powerhead to achieve some really good circulation if you don't mind the footprint of it in the tank.

We give the Power Sweep power head