Review
I have been wanting to get LEDs for my reef tank for several years now but the prices were always more than I wanted to pay. I couldn't justify the costs of swapping out my T5 lighting setup for an Ecotech Radion Pro XR30w Pro LED light. I was kind of pushed into (at least I tell my wife this) getting them due to the large power draw the T5 fixture was needing along with all the other equipment I had on this one particular circuit. Getting the Ecotech Radion Pro LEDs would let me start up my frag rack again since it's right next to my reef tank and on the same circuit. 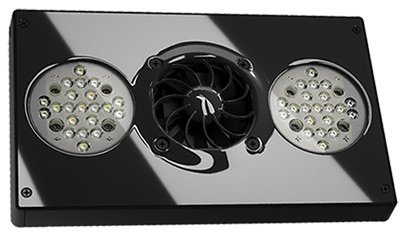 These LEDs are quite expensive and I figured if I was going to shell out the cash for LEDs I might as well go with one of the fixtures getting good reviews. I really like the Ecotech Vortech pumps (MP40s) I have and getting the Radions would allow me to hook everything up together to create some cool effects (more on that later). Ecotech now has a new wireless bridge called ReefLink which allows you to hook up your Radions and Vortech pumps and control them from anywhere you have an internet connection. There is a website, android app and iOS app that you can access to control your devices. It is really neat and I can't help but think Ecotech has much bigger plans for the ReefLink down the road. Wireless probes for pH, ORP, salinity, etc. just have to be in the works. Anyway, this review is about the Radions so lets talk about the LEDs for now.

These lights do not come with a mounting system. That has to be purchased separately which is kind of a bummer given the amount of money I just forked over for them. They have rail mounts that lets you hook the Radions together and you need a ceiling mounting kit to hang them. Some folks are selling custom made stands you can get if you don't want to mount them from the ceiling. I chose to mount them from the ceiling without the rails. I bought two Radion XR30w PRO fixtures since I have a 120 gallon tank (tank is 4 feet wide) and the spread on one fixture is around 2x2 feet. You can get more spread with the standard 80 degree lenses if you mount them higher, but you lose some intensity of course. They have 120 degree lenses that gives you a wider spread but I didn't get those.

Mounting them was quite easy after drilling the pilot holes in the ceiling studs. It took about 30 minutes to mark the holes and get everything hooked up. The power boxes for these LEDs are rather big so you will want to put them some place hidden and fortunately they give you plenty of cord length on the lights. If you don't get the ReefLink wireless bridge device you will need to hook up the lights with a USB cable to your computer to program them. If you don't have a long enough USB cord you may need to program the LEDs before hanging them. Since I did get the ReefLink set-up was really easy. You connect to the website, create an account, let the website identify the fixture and then the fun begins. I have an iPad and downloaded the app that lets you control the lights wirelessly and I had way too much fun playing with the various modes.

There are many different modes that come pre-set. You can simulate cloud cover, thunderstorms and pick the exact colors you want to be running at any time throughout the day. Many of the pre-set modes are quite good and what I did was pick one and start messing with it slightly until I got it just the way I wanted it. I start off with a slow ramping up in intensity in the morning with mostly blue tones and slowly come up to about 80 percent intensity for several hours with around 14k and then slowly start ramping down the intensity and turning the lights more blue again towards bed time. This simulates the intensity levels found on natural reefs and I think the corals in my tank are responding quite nicely. The vortech pumps now go into night time mode too when the lights go off for the night. You can control all of these things from the Ecosmart Live website. See the picture below for the schedule I'm currently running.

Another very cool and important feature to mention is that these lights come with an "acclimation" mode. If you put the lights into this mode they will ramp up in intensity over the period of time you specify until they reach the max intensity specified in your schedule at the end of the acclimation period. This is really important for those coming from lower powered lighting set-ups because you don't want to shock your corals with the higher powered LEDs. You want to gradually acclimate them to the new lights. 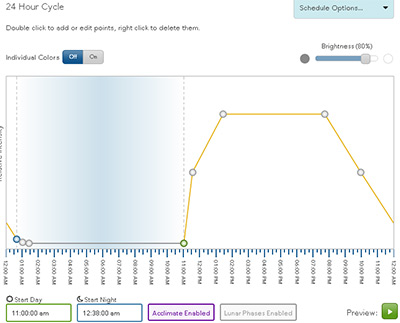 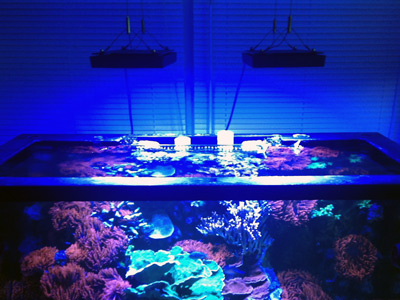 One thing that I really enjoyed was the shimmer effect. I had been running T5 lights for the past several years and didn't get that shimmer with the T5s. The LEDs also don't seem to have the "fullness" of T5s. These LEDS are more penetrating and the light is directed down more into the tank whereas the T5s provided light everywhere. The bubble tip anemones in my tank made it quite clear that they weren't happy with their current positions in the tank after the move to LEDs and started migrating to be out more under the light. With the T5s they were more in the corners and back parts of the tank where they were getting plenty of light. This "migration" of the anemones had some bad results. They ended up stinging many of my acroporas, montiporas and even my treasured brain coral in their attempts at getting out under the new lights. Needless to say, getting my frag rack up an going again became a priority so I could start moving the anemones out of my reef tank. I've been wanting to start farming them more proactively anyway and now I have too if I want to keep my SPS corals because the anemones are out of control!

What I Like About the Ecotech Radio Pro LED:

The controllability is impressive with these Radion Pros. I can literally make my tank any color I want. If I have friends coming over I can switch it into "All Blues" mode and it makes the corals fluoresce and looks amazing. If I want more growth versus less color I can switch it over to higher intensity and more of a 10 to 14k mode. Setting up the schedule via the website was a breeze and quite fun. Controlling the lights from my phone or iPad is a nice bonus that I didn't think I would like as much as I do. Control is at your fingertips without having to get up and mess with the lights if you get the ReefLink.

What I Don't Like About the Ecotech Radio Pro LED:

The spread of the LEDs versus my previous T5 fixture. The light was much fuller under the T5 fixture whereas it is more direct and focused under the LED fixtures. I can position the lights higher to get the desired fullness but I'm losing PAR when I do that and I don't like the look of having the lights so high off the tank. Just kind of looks bad when the fixtures are mounted too high in my opinion. Why did the put the cooling fan on the bottom of the LED unit where it could get salt splash? The price of these units is still rather high. LEDs are supposed to be cheaper aren't they? Still paying for the tech research I suppose or until more competition enters the market. I will get some cost savings from not having to buy new T5 bulbs every 12 to 18 months or so since these LEDs are supposed to have a much longer life span of many years and from lower energy bills.

I am quite pleased with my purchase of these LEDs and since I can now run my frag rack without tripping the circuit breaker. This results in less stress on me and it will eventually allow me to trade anemones with friends and fellow reefers. I give these LED lights