The Ricordea florida mushroom coral comes from the Caribbean and they often sport amazing corals making them a hobbyist favorite. These corals often show up in shades of blue, green, purple, red and pink and look absolutely fantastic with the way the fluoresce under moon lights.

Keeping this coral is not too difficult since they require very little other than the proper lighting and water parameters. Supplemental feeding can be attempted but do not overfeed the tank which will just foul the water.

Ricordea florida are not overly aggressive and make very good tank mates in a reef tank. However, avoid placing them too closely to other coral species. It's always a good idea to give all the corals in your tank plenty of space to grow and to avoid chemical and physical aggression among species.

Place your Ricordea on the live rock so they can attach. They usually come pre-attached to some live rock rubble. You can glue or use epoxy to bond them to the rock work in your aquarium. Fragging them is actually fairly easy. Use a razor blade to slice them in half and then affix them to some small pieces of rock rubble or frag plugs. Give them low to moderate water flow to help wash slime and mucus away and keep the water conditions in line and they should heal in a matter of weeks. 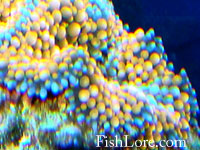 Care Level : Considered easy to care for assuming that you have the proper aquarium set up.

Temperament / Behavior : Fairly harmless mushroom coral chemically, the Ricordea florida is not overtly aggressive but be sure not to place it next to other corals that could sting or agitate them. They are reported to be somewhat harmful to other species when touching.

How to Frag : Since these false corals can be rather slow growing, fragging by using a razor blade and slicing them in half works pretty good and it's easy to do. Cut them in half and the affix them to some live rock rubble. Some even slice them into quarters, but this can be more risky.

Food : Phytoplankton and zooplankton foods can be offered but the majority of their feeding requirements comes from the zooxanthellae, so adequate lighting levels are needed.

Light : Moderate to High lighting levels are needed due to the zooxanthellae in their tissue. T5's, VHO's or Metal Halides are recommended. If using metal halides, slowly acclimate them to the light intensity over a period of days or weeks.

Water Movement : Moderate but not too much and turbulent flows are favored. Avoid having too much water flow around Ricordea.

Acanthastrea Coral
Although individual specimens of Acanthastrea coral can vary, in general they require moderate water flow and moderate lighting.

Acropora Coral
Acropora corals are one of the primary reef builders in world's oceans and they are highly sought after by reef tank hobbyists for their remarkable growth rates and intense colors.

Birdsnest Coral
For the water flow in the aquarium you will need moderate (when small) to high indirect or turbulent flow as it grows. Not giving them enough flow can lead to algae growing on the branches or branch tips.