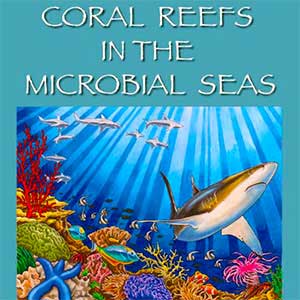 The book Coral Reefs in the Microbial Seas is about the global stressors on the world's coral reefs. Topics such as climate change, ocean acidification, overfishing and the rise of algae, coastal pollution, the role that bacteria and microbes play and more are covered in depth. For those new to these topics, they may sound daunting or dry but the authors do a really good job of presenting these very important topics in a fun and interesting way to keep you turning the page. Other than the really good information found in this book, my favorite parts were the introductions to the chapters which presented what was about to be talked about with funny little stories about the team. Coral Reefs in the Microbial Seas follows a group of researchers, scientists and biologists in their study of coral reefs.

The topics presented in Coral Reefs in the Microbial Seas are highly controversial these days. Why? They really shouldn't be considered controversial but they are. My opinion is that this is primarily due to interests (corporations) with really deep pockets clouding the issues purposely for their own gain. If you watch or listen to any number of political figures on the radio or television you are probably feeling very confused, which is exactly what these interests with extremely deep pockets want. They do not want an educated populace. They pay these pundits to prey on people's prejudices and lack of education to sway public opinion. The definition of propaganda is: "Information, esp. of a biased or misleading nature, used to promote or publicize a particular political cause or point of view". What you hear from political talking heads on the radio or television is propaganda, pure and simple. All it takes it just a little bit of digging to get to the information you need. If you're the least bit confused or even if you think you know it all regarding the aforementioned topics, read this book. It's one of the better, more straight forward and to the point books you'll find to date regarding whats happening with the coral reef zones around the world.

The world's coral reefs are facing some challenging times now and will for the foreseeable future. The reasons are many and this book breaks it down for you in easy digestible chunks.

A lot of information is presented in Coral Reefs in the Microbial Seas and hopefully you'll find it an enjoyable read like I did. The authors do a nice job of presenting the information in a light hearted and enjoyable way and make it easy for those without their doctorate degrees to understand. Definitely worth reading and I give this book

Rating Information
Review Title: Coral Reefs in the Microbial Seas
Reviewed by: Mike FishLore
Summary: Book review of Coral Reefs in the Microbial Seas
Description: This book is about the global stressors on the world's coral reefs. Topics such as climate change, ocean acidification, overfishing and the rise of algae, coastal pollution, the role that bacteria and microbes play and more are covered in depth.
Rating: 5 out of 5 stars.
More Aquarium Book Reviews

Giant Clams in the Sea and the Aquarium