How To Build Live Rock Wall

I've always wanted to try building a live rock wall for one of my reef tanks and thought that now was as good a time as any to build a rock wall. I've been to various aquariums and have seen some really good fish tank displays made with full rock wall backgrounds and they always looked good. I made the live rock wall build in this article over a period of 2 to 3 days and spent approximately 8 hours on it total.

Just a heads up, this DIY aquarium project cost more than I was initially thinking. After all was said and done it cost about $300 to build this wall for a 120 gallon tank (2x4 feet back wall dimensions). Also, I built if for a tank that was already set up which makes it a little more challenging. The 120 gallon reef tank has been running for about a year. 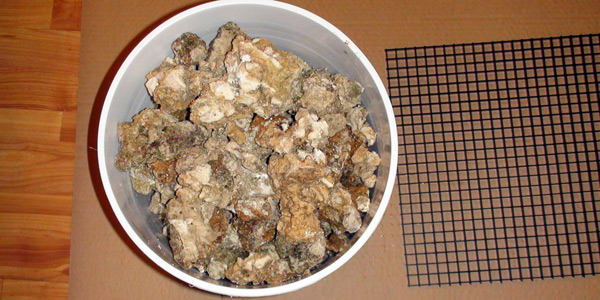 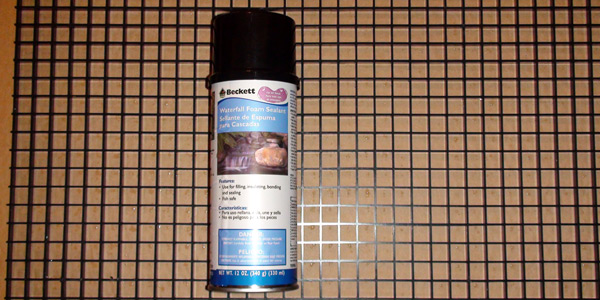 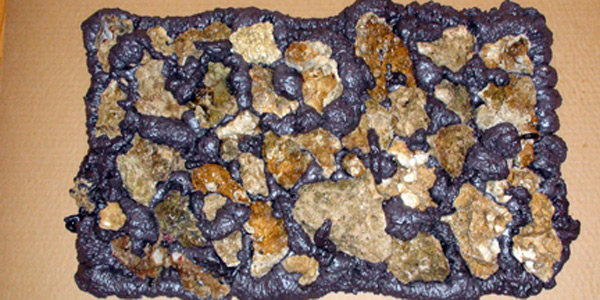 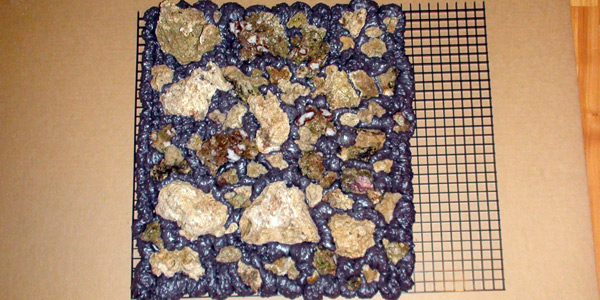 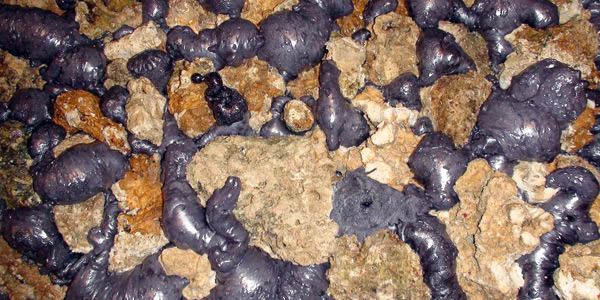 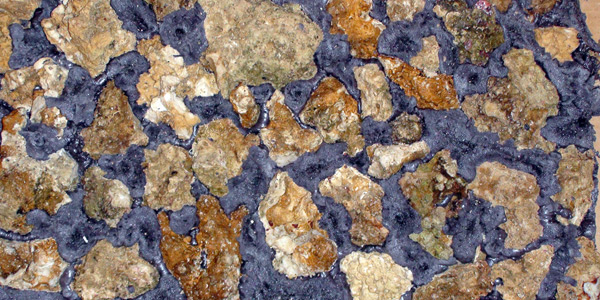 After getting the necessary materials together and cutting the egg crate to the sizes needed, I started to build. I was working with three sections/pieces of egg crate (left, middle, right). My overflow is in the middle of my tank, so working with 3 sections made the most sense and I didn't want any of the pieces to be too big to manipulate into the tank since the tank is already set up.

I placed a sheet of card board on the floor and used that as my work surface. Starting with the right section of wall, the black egg crate was placed on top of the card board and then I started applying the black foam. I wanted to get my first piece done and put into the tank to see how it looked before I continued with the project. If the first piece didn't meet my expectations I didn't plan on finishing this project. Once the egg crate was covered with foam I placed the pieces of live rock on top of the foam. Go slow on the foam trigger! Remember that this foam increases in size as it dries. At first I was applying too much foam and soon found out that I could use half as much as I was using. One can of foam was used for each of the three sections.

I set the first piece of wall aside and let it dry over night. You should let it dry for about 20 to 24 hours. The next day I trimmed the excess foam off. I created pits and grooves, primarily trying to get rid of the shiney bubble look of the foam. An exacto razor blade knife worked really well in trimming the foam.

The next step was to get the egg crate off the card board. This proved to be kind of a pain and was slow going in getting the tiny pieces of card board off the back of the rock wall. The first piece was ready for the tank. I reached into the tank and moved some of the rock and corals around so I could easily place the first piece into the tank without messing anything up. My measurements were spot on and the first section of rock wall fit in perfectly. It looked even better in the tank than I thought it would. Check out the picture that shows the right side rock wall inserted into the tank and you can see what my purple coralline coated back wall used to look like on my over flow (pic below).

That night I started on the middle section and right section of egg crate. Three cans of foam proved to be just enough for my 4x2 foot wall. I let these sections dry over night again and the next night trimmed them and then placed them into the tank.

The left and right wall sections were really easy to insert because I have a rim around the top of my tank. The center over flow does not have a rim so the rock wall kept wanting to float. I used some plastic clamps as a short term hold but will use aquarium sealant for a long-term fix. If you're starting off with a brand new tank your job is much easier since you don't have to mess with re-arranging the aquascape and using aquarium sealant to affix the rock wall to the back wall.

Things to watch out for

Depending on how much live rock you use and how good your filtration system is you may need to monitor the nitrogen cycle again for a couple of weeks if you do this on a tank that is already set up. Go slow, do it in sections if you can and only add a section at a time if you think it will trip the cycle. Set your protein skimmer to skim wet for the next few weeks to remove any organics introduced by the new rock work. Don't trim off too much of the foam! Although the foam is really strong and a little bit works well, if you trim off too much you risk rocks dropping off the wall. Also, make sure the rock is dry before you place it on the wet foam.

I think it turned out rather well and makes the reef tank more "natural" looking. When I first set this reef tank up about a year ago I told myself that I didn't want to overcrowd the tank with corals. I wanted a few select corals (acropora coral and montipora) to dominate the tank. It seems that I don't have the patience I thought I had in letting these corals grow and to me the tank still looks empty. They are growing fast, just not fast enough (lol). So, one of the things I really look forward to doing is placing coral frags on the rock wall towards the top so it fills it in more. I plan on having more acropora coral towards the top of the tank. It will look like they are growing out of the back wall. Good stuff! 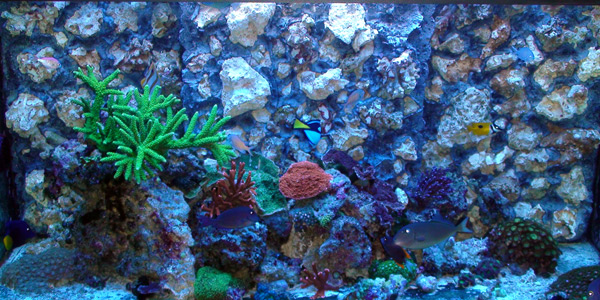 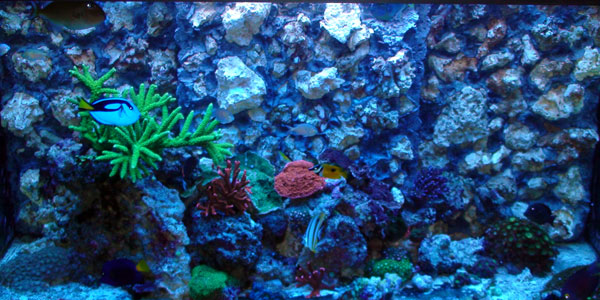 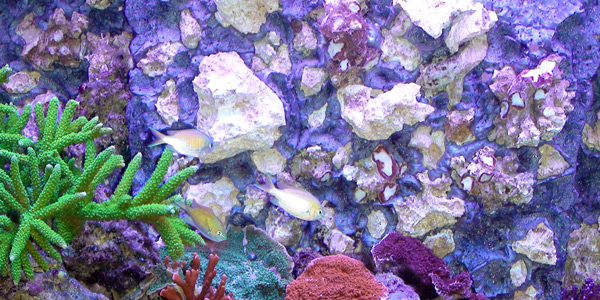 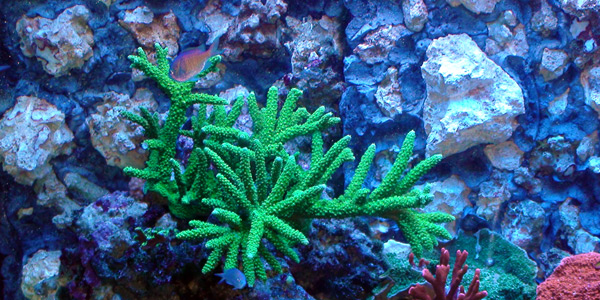 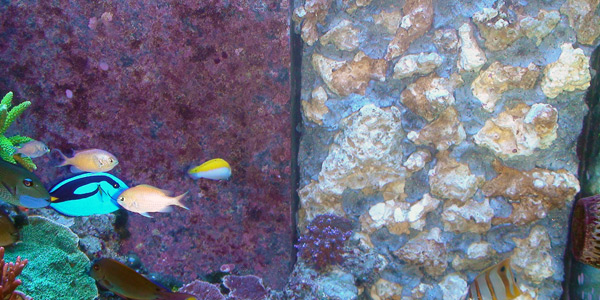 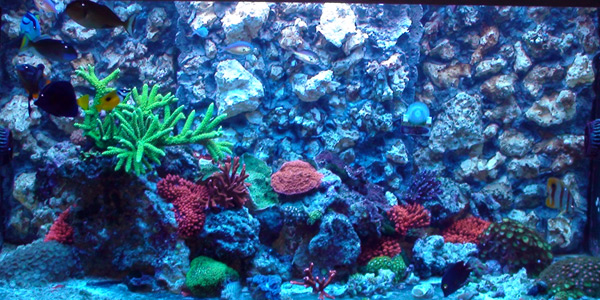 This is what the wall looked like about a year afterwards... You can read more about my reef tank setup in the link below. 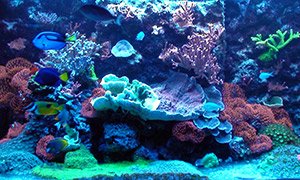