The infamous bubble algae. If you haven't had to deal with the algae we're about to discuss consider yourself lucky. Green Bubble Algae usually comes in on the live rock and it can be difficult to keep your saltwater aquarium setup free of it once established.

There are several different varieties that you might get but they are supposed to all have similar needs and requirements for their growth. So we'll treat them the same for the purposes of this intro article on this algae. 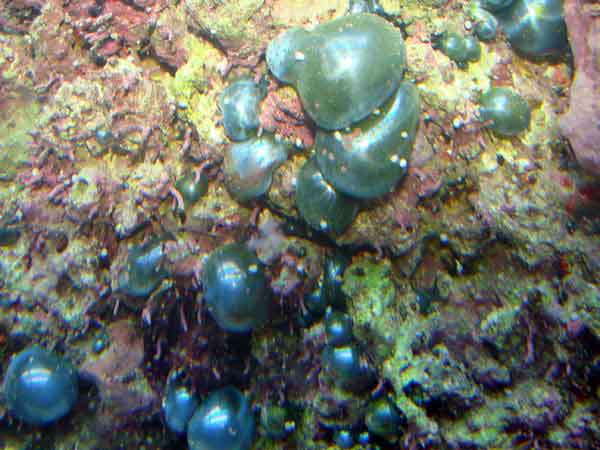 Valonia macrophysa - smaller clustered elongated bubbles
Boergesenia - clustered, though less dense in numbers and elongated bubble shapes
Ventricaria ventricosa - can get quite large (around and inch) and grows in clusters and in singles
Dictosphaeria ocellata - usually smaller grouping slimey looking bubbles, can be a lighter shade of green
Dictosphaeria cavernosa - encrusting like growth forms with pitted looking bubbles

Some think this bubble algae looks unsightly and if left unchecked it may make your tank look a little odd. The other problem is that they can overgrow neighboring corals in your reef tank setup and you don't want that right?

The variety of bubble algae we've seen the most crop up in our tanks is the Ventricaria ventricosa and is the one pictured on this page. It came in on a piece of live rock as a single tiny bubble. Over several months that single bubble turned into several smaller bubbles. It didn't look too bad so we let it be. Fast forward a couple of weeks and we now had rock covered in these bubbles that were getting larger. A couple even looked deflated which is an indication that they have released thousands of tiny spores into the tank so that more algae can get a foot hold and grow. Time to do something. 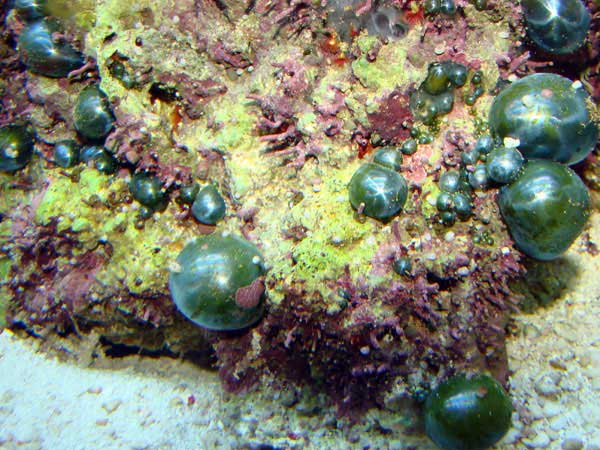 Supposedly this algae, like most others, needs nitrates to grow. phosphates may play a role too along with a mix of others. Keeping these levels as low as possible means that algae in general should have a hard time growing. We usually run our tanks with 0 nitrates and undetectable levels of phosphates (using a phosban reactor) according to our salifert aquarium test kits. Partial water changes with reverse osmosis water are performed weekly. We also run an attached refugium that is used to grow the macro algae chaetomorpha so this algae shouldn't be growing as fast as it is! But, sigh, it does.

Getting Rid Of And Controlling Bubble Algae

So what do you do when see this stuff in your tank? You have a few options:

Those are some of the ways to help deal with this dreaded algae. The bad news is that once you get it in your tank you may have a regular battle keeping it at bay. We've resorted to removing it anytime we see it starting to crop up. I don't want to remove the rock (as some suggest) and starting over. That would be more of a pain than just simply removing the bubbles by hand.

If you have experience and tips on dealing with this algae drop us a note using the link below and we'll post it on this page.