The Kuhli loach, also commonly known as Coolie loach, comes from the Tropical waters of Indonesia, Malaysia, Java and surrounding areas. The Kuhli is eel shaped. Its body colorings are a kind of salmon-pink/yellow with dark brown to black stripes that half circles the body. The stomach is a sort of a whitish colour. The eyes on this loach are set in one of the stripes and therefore not easily seen. The mouth is set at a downward angle and with 3 pairs of bushy barbels adorning it; it looks like it has an obstinate little moustache. Its fins are translucent.

This rather pretty little loach is fairly easy to care for in the home aquarium, needing water that is medium-soft to medium and pH around 6.0 to 7.0. It has been known, however, for them to adapt to most water conditions. Its region in the tank is the bottom where it browses for food. The temperature should be 75 - 85 F (24 - 29 C).

They have an advantage over most of the other loaches kept in aquariums, inasmuch as it never grows too large, growing around 8-11 cm (3-5 in) in length. Also their bioload is very small for a loach. Be sure to keep the tank covered properly at all times as it can squeeze out of quite small places. The minimum tank size required for the kuhli is 20 gallons (37 liters).

They also prefer sand for substrate but if sand is not appropriate, smooth stones should be used so that the loach won't scratch its body on gravel or stones. Sharp edged decorations also would not be a good idea, with their habit of squeezing into tight places they could get badly scratched. See examples below.

These loaches are peaceful fish and prefer to be kept in schools of 3 or more. Because of this fishes beauty, many hobbiest get them straight after the nitrogen cycle has completed. It is, however, not advised to get them for the new aquarium as they are affected by sudden water changes. It is best recommended to wait a month before introducing them to the aquarium. 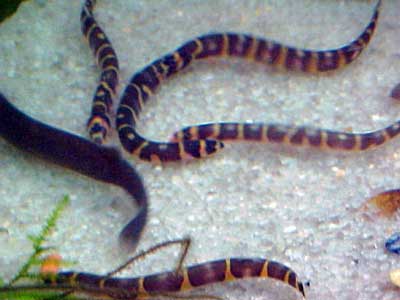 Many fish can be kept as tank mates with the Kuhli Loach as long as precaution is taken not to include fish that are able to take them for a bite of food. In other words, don't keep fish that are big enough to eat them. They scavenge for food mainly at dusk or in the dark as they are nocturnal, and spend most of their time hiding in the substrate, plants and decorations during the day. But with time most of them readily learn to eat during the day time. Being scavengers they eat most fish food, however sinking food pellets are preferred as well as live foods, for instance; bloodworms and brine shrimp. It is recommended to feed them either, just before the lights are turned off for the night or after the lights have been off for a while. Dont switch on the lights during the process it may scare the fish back into hiding. This is sometimes done with a flashlight when a curious hobbiest wants to see whats going on when its dark inside the tank, but NEVER shine a flashlight into the tank after the lights have been off for a few hours! It will put the other fish and maybe the kuhli into a state of shock!

There are no specific common diseases that can affect them. It may get affected by any freshwater fish disease or if you do every thing correctly, it will not get any disease at all. Like other scale less fish, it is affected a lot from medications that treat diseases like ich, so with a scale less fish, the best thing to do is just increase the temperature. The tank water should be kept clean at all times. That way it lessens any chance of poor health and enables your fish to stay strong and healthy. The life span of kuhlis is approximately 10 years, but longer has been recorded. 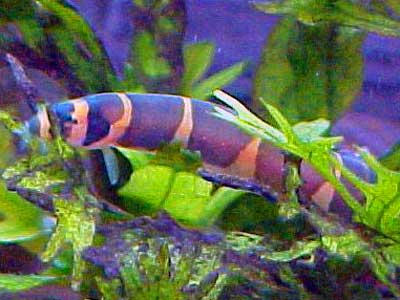 These loaches are mostly bred in their native areas as they are very much available most of the time. Breeding in the home aquarium can be difficult. The eggs are stuck to roots, buried beneath the surface of the substrate. Females are plumper when ready to breed. This is the only way to identify the sexes. Most breeding is done accidentally when many kuhli loaches are put in a tank together and they breed by themselves. If you want to try and breed them, the best way is to get a bunch of them in a tank with an undergravel filter. Leave the kuhlis by themselves without any other fish for a few weeks, while still doing regular maintenance.

What Fishlore Members Have To Say About This Loach

"Kuhli loaches are really cool! They love to dash around through the bubble wall, hang from the java ferns like Christmas decorations and they are very easy to train to eat from your fingers. We love their unusual shape, their striking colours and most of all that they're such hyperactive, funny clowns!! They'll just dart around for hours and hours and hours, and then suddenly stop and rest.

They're always trying to squeeze in stupidly tight spaces, to our great entertainment! They're really cheeky to our otos and continuously bump into them, head first and at full speed, for some dark and unknown reason. The otos seem to ignore that, so all is well. They make good tank mates, pretty much ignore (and are being ignored) by their other tank mates. They seem to be very tough little fish, nothing seems to faze them. However, they don't eat snails because their mouth isn't made right to eat them. But they're great cleaners otherwise! They seem to loooove sand. They'll burrow through it at high speed, and spit out sand from their gills. Do cover your filter outtakes as they WILL try to swim against current into them, risking... decapitation!"

Care Level : Easy-Medium, tank needs to be well covered so it can't squeeze out

Temperament / Behavior : Peaceful; most active at dusk; feeds at night, hides during the day

Breeding : Breeding them can be difficult in the home aquarium. The eggs buried beneath the surface and stuck to plant roots. Most breeding is done by accident when many coolies are put into a tank and they mate by themselves. The best way to breed them is to get a bunch of them and get a tank with an under gravel filter and leave only coolies in the tank and leave it alone for a few weeks, while still doing the regular maintenance.

Tank Mates : Many due to peaceful nature. Just don't keep with fish big enough to eat them. They prefer to be kept in schools of 3 or more.

Gender : Female coolie loach may be more plump when ready to breed.

Extra : They prefer sand for a substrate instead of regular gravel. If sand isn't an option, use very smooth rocks for the bottom so the loaches don't scratch up their body.

- Complete Encylopedia of the Freshwater Aquarium by John Dawes

- A Superguide to Aquarium Fish by Dick Mills


Still have questions?
Jump on the forum and ask your question!
Go here: Kuhli Loach Forum

Botia macracantha
Clown Loach
The Clown loach is a loach with tons of personality that needs to be properly acclimated to your larger sized tank. 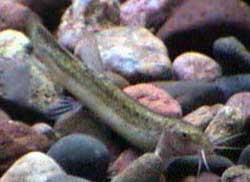 Misgurnus anguillicaudatus
Dojo Loach
Also known as the weather loach because of their behavior during low fronts in the weather system. 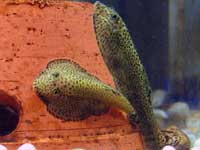