The Barramundi, also known as the Giant Perch is a fish that is rarely seen in aquaria, most likely due to their enormous adult size. Barramundi can grow well over a meter, and must be kept in very large aquariums. Depending on the diet of the fish, individuals can double their size for the first 6-12 months of their life.

Barramundi do possess some spines along their dorsal and ventral fins, separated by soft rays. Their coloration may differ for each individual specimen, but it is common for a young barramundi to be silver, with brown splotches/spots towards its back and front of the face, and a white face mask. As the Barramundi grow, depending on their environment, they can become darker or lighter in color.

Barramundi are carnivores, and will accept most forms of frozen and live food. Individuals can sometimes be picky, but nearly all will accept bloodworm and blackworm. In the wild, Barramundi feed on crustaceans, molluscs and smaller fish. They are sometimes known to be cannibals.

Breeding Barramundi is very rare in the home aquarium, due to the fact that through out the breeding/spawning process there are many different water parameters for each "cycle" or "stage" of reproduction. In the wild, they descend downriver towards estuaries and tidal flats to spawn. In some cases, purely marine populations occur. At the beginning of the monsoon, males will migrate downriver where they meet the females to lay their eggs in brackish water. After the eggs have been deposited, the parents do not guard the eggs. 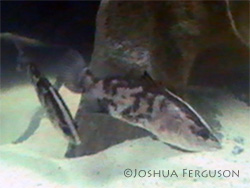 Care Level: Moderate (grows too big for most home aquariums)

Origin / Habitat: Persian Gulf, Southern China and southwards to Northern Australia. Within Australia its range extends from the Mary and Maroochy River systems in south-east Queensland northwards around the entire northern coast to Shark Bay in Western Australia.

Temperament / Behavior: This fish will eat any other that can at least half fit in it's mouth, known to eat fish larger than itself.

Compatible Tank Mates: Best kept in a species tank, or in a large tank with larger fish. Archer fish are a common tank mate.

Gender: This fish is a protandrous hermaphrodite, all fish begin life as male, and can turn into a female if there are not enough females present. Can only change once mature at around 5 years old.

About the Author: Joshua Ferguson is a Western Australian fish keeper based in the hills of Perth. He has been interested in fish his whole life, and has kept fish through out his whole life. The hobby was then revived for him towards the end of 2008 with the start of his African Cichlid set up. By mid 2009 he had filled his house with 6 running fish tanks, with the contents of them ranging from Malawi Cichlids to Bettas to Barramundi. His main interest is in exotic/oddball fish, fish that are not exactly hard to keep, just rarely seen in home aquaria. With many more set ups to complete, Joshua Ferguson is a young, but very interested knowledge developing aquarist.