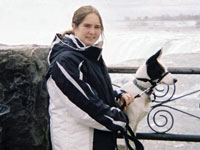 I'm 24 years old, living in Missouri but originally from England (hoping to return after husband finishes current job and goes to finish his degree). I have 137 fish and 1 deaf Border Collie (and 7 Border Collies, 10 Jacob sheep, chickens and a cat living in England with my parents). I qualified in England as a veterinary nurse, and then met the man of my dreams (except he doesn't like animals only fish) while he was stationed near where I lived. Got married and now am in America (I like it here but can't wait to get back to England).

I started fish keeping about 6 months ago, but had often done maintenance on my then boyfriend's (now hubby) 10 gallon tank which had 6 black skirt tetras in and huge amounts of algae growing (to the point you couldn't see fish and they struggled to swim around). I have been reading ever since I got my first tank, It was a 10 gallon tank with 5 female micky mouse platys (came from a friend), I went out that weekend and bought 3 dalmation mollies, 2 RTS, a hong kong pleco and 2 ADF's. Then found this sight and started reading and very quickly went out and bought a few more tanks to house everyone in better conditions (I couldn't return any cause im the type of person, who buys an animal or fish for life! Yes I have animals in England - do you know how expensive it is to ship animals?!) Well enough about me on to the aquariums.

This tank is about to be upgraded to a 200 gallon tank. Amazingly the RTS doesn't mind the balas or the clowns. The first 24 hours he tried chasing the clowns away from everything in the tank, but they thought he was playing and the others joined in the chase, so now he thinks he is a clown and regularly plays with them when they are doing there cute clown "dances". I needed some dither fish so decided on a few angels; now I love these guys. I'm going to need to sell some of them at some point as I have too many, especially at breeding age. The kuhlis I rarely see. The mollys and platies are left over from the 55 gallon live bearer tank I had; they are all female (or if one's a male I have never seen babies) and are just happily living out their old age. The ADFs love the 125 gallon and are all over it, none of the fish have bothered them and they are definitely the boss if they have shrimp pellets.

The tank is decorated with pool filter sand substrate, rocks, huge piece of driftwood, and some java moss, java fern and Crinums thaianum (dwarf and giant).

Current lighting: one power glo and one sun glo.


This is sort of the husbands tank he said what he wanted in it and everything but we both take care of all the tanks with feeding and cleaning. 8 Synodontis aterimus, 14 Labidochromis caeruleus, 7 Pseudotropheus sp "acei", 7 pseudotropheus sp. "Elongatus Chewere", 7 Pseudotropheus socolofi. 1 Red Tail Shark and occasional visits from a wandering common pleco (Has a "time share place" with this tank and the 90g). I feed cichlid excel and omega one super veggie kelp flakes and occasionally cichlid gold as a treat.

It is decorated with a combination of local agate and synthetic lace rock over Tahitian Moon Sand. Filtered by 1x Fluval FX5, 1x Magnum 350, 1x Penguin 330. Planted with 3 Anubias nana and 3 Cryptocoryne wendtii.


18 juvenile Placidochromis sp. "Phenochilus Tanzania". I am planning to breed these when old enough, and will be selling some of the excess males and females when I can tell the sex. A pair of Dempseys (Jack and Jill) we bought these guys when we picked up the 90 gallon; the man offered them to us and although we were not keen on having Dempseys, when I saw the 6" male and 4" female living in a 2.5 mini bow front, I just had to have them. They couldn't even move away from the net when we went to catch them! They are both very shy and run from any human or fish that try looking at them! They are definitely not normal for the breed, but I have fallen in love with them and they are, I hope, happy. Natural gravel, huge piece of drift wood and a castle, filtered by 2x penguin 350s, and lighted 1 power glo. I feed home made carnivore diet and spirulina flakes and occasionally some live feeders as a treat.


Home to a walmart rescue betta (Wally), ghost shrimp and a blue mystery snail. Glass pebbles on the bottom with small piece of drift wood, Aponogeton madagascariensis (lace plant), java moss and micro sword. The tank came with a built in filter and it currently has an incandescent light which keeps the water at a steady 80 F! All plants seem to be doing well and growing so no plans to upgrade lighting at present. There is a patio door on the other side of the room that lets in loads of light. He gets fed 5 pellets twice a day of hikari betta bio gold and occasionally blood worms and peas.


With 2x ottos and a crowntail betta (Apollo), whisper in tank filter, micro sword and river pebbles. No heater at present but there will be one in winter. Apollo only likes hikari betta bio gold, he refuses to eat any bloodworms or peas.


Male and female mustard gas crowntails. These are my breeding mustards. I have a small whisper filter and a heater. The tank is divided. They have a few river pebbles and a couple of fake plants on each side but other than that its bare bottom tank (the male mustard has a cave as he is very shy still). I feed a variety of high protein food to them to keep them on top form for breeding.

I'm planning to breed black orchid crowntails with a friend, Scott. We are hoping to get orchids in black and either red or green not just blue. Maybe a saltwater tank with the fish and reef (need to save money first) and generally making sure my fish are happy with lots of area to swim in.


Fishlore for the excellent advice, and great people, The husband who allowed me to get MTS after picking up a friends 10 gallon (within 2 months I had one 90 gallon, one 20 gallon and two 10 gallon tanks). Scott for getting me into betta breeding and to Aaron (dogsnfish) for setting me up with some wonderful breeding pairs of bettas.